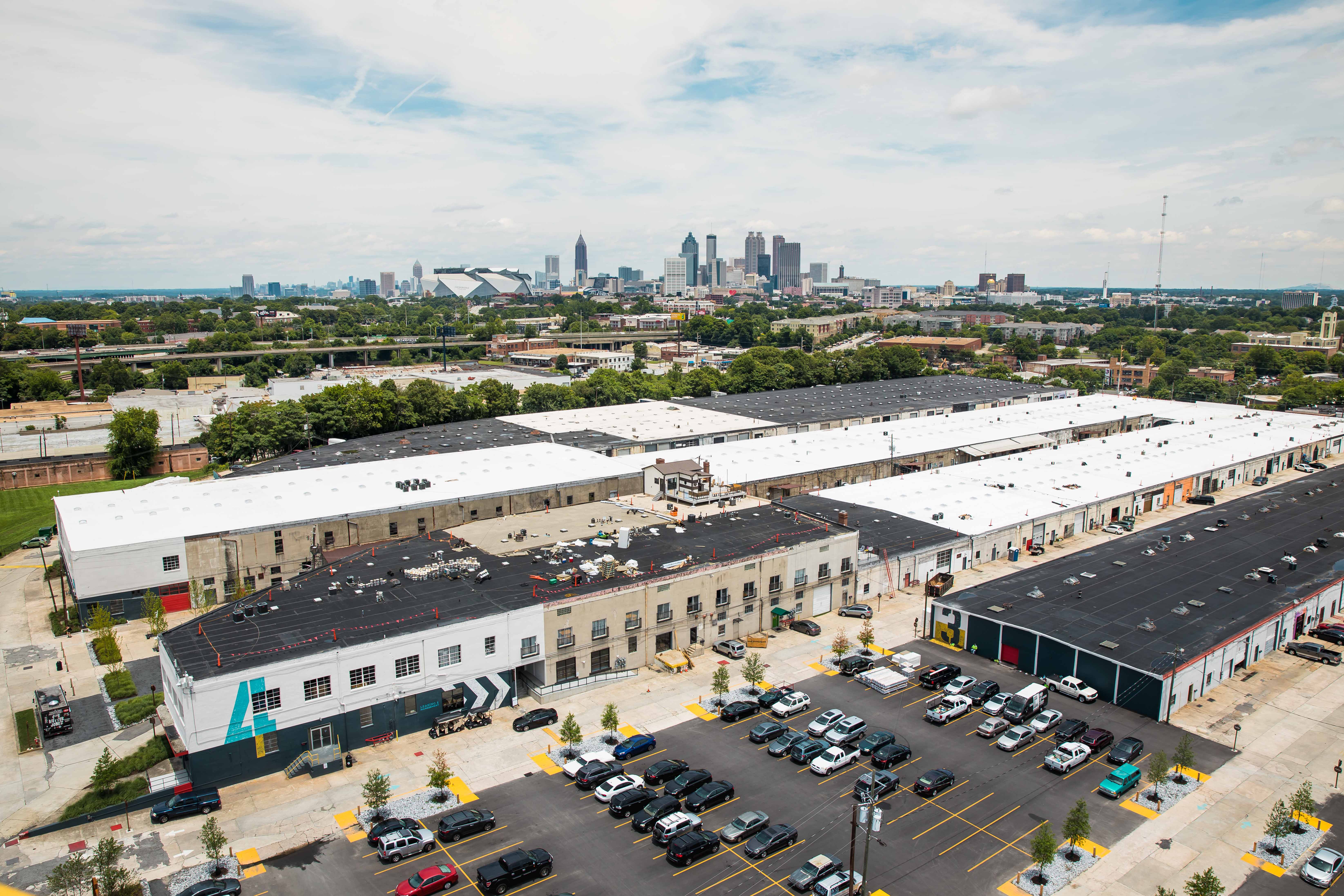 The MET, a 1.1 million square foot reuse project from Carter. This is the former Candler Warehouse on Metropolitan Ave. photo provided by Carter

Back in October of 2018, my second post for Saporta Report was published. In “Let’s build Atlanta as a city, not a suburb” I mentioned a few places I saw around the city and had concerns about.

That article mentioned the Georgia State Stadium-Summerhill development, spearheaded by the developer Carter. After a conversation with Carter, I was invited to tour one of their current projects – The MET.

The MET is a 1 million square foot of warehouse built in 1914 by then owner Asa Candler of the Coca Cola company before the family sold it in 1919 to a group of investors led by Ernest Woodruff.

The MET sits in South Atlanta in between Murphy Avenue and Metropolitan Parkway and is an eight minute walk to the West End MARTA Station. It’s one mile away from Carter’s other ongoing redevelopment project at Turner Field and Summer Hill.

The MET is one of many projects from Carter, a developer which focuses on urban infill and public-private partnerships. 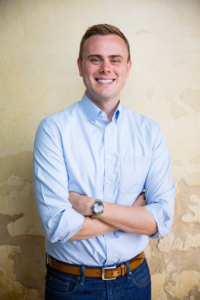 Adam Parker, Director at Carter. Adam oversees The MET a revamp project of the old Candler Warehouse on Metropolitan Avenue

Below is an excerpt of an interview with Adam Parker, a Director at Carter on their latest rehab project, The MET as well as other topics including Summerhill.

Dr. Renée Skeete, a sociologist here in Atlanta with expertise in the built environment, urban health and gentrification, joined me for this interview.

The following is an edited excerpt of a longer conversation with Parker on The MET and Summerhill. You can listen to it in full on Thursday, but stay tuned via my Twitter feed for more details.

King Williams: …In regards to Summerhill and now The MET, it seems like you [Carter] put your flag in South Atlanta, was that strategic or just happenstance?

Adam Parker: It’s a little bit of both.

It really all started with Summerhill back when the Braves left, we partnered with Georgia State. The Georgia Dome was being torn down and Georgia State needed a place to play football and you had an Olympic stadium coming online.

Georgia State, despite having capacity to build isn’t a developer, so what are you going to do with 5,000 parking spaces [at Turner Field (now Georgia State Stadium)]?

So, we found a good partnership there. Where Georgia State wanted the stadium and the parking spaces development. Summerhill was basically a snowball effect …and like you said, we’ve planted a flag. 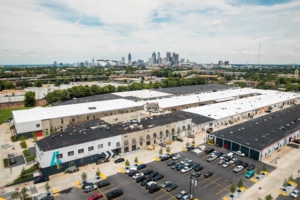 The MET, a 1.1 million square foot reuse project from Carter. This is the former Candler Warehouse on Metropolitan Ave.
photo provided by Carter

KW: What made Carter want to buy this property [The MET] in the first place?

AP: We’ve been working on our Summerhill project for about 5 years and we’ve spent a lot of time in this part of Atlanta. Also for the past year or so we’ve been working on a deal with the Morehouse School of Medicine, so our days have been spent driving up and down Ralph David Abernathy.

Then about a year ago we decided to drive by and take a look.

This location is a part of the same neighborhood planning unit as Summerhill, so we’d go to these neighborhood meetings and we here this thing called the metropolitan arts and business district.

When we [Carter] first saw it, I assumed it was vacant and because the Atlanta real estate industry is small, we find out the owner had it for sale. And before you know it, Carter owns a 40-acre, 1-million-square-foot warehouse.

Renée Skeete: I have some questions about your community engagement. I’d like to know more about the community meetings that you’ve mentioned. Can you speak on those?

AP:  From our perspective, we [Carter] were very aware of the history surrounding the old Turner Field (now Georgia State Stadium), back to when it was the Washington-Rawson neighborhood.

Knowing that, understandably so, when the Braves announced that they were leaving there was a mixed reaction from the neighbors… A lot of them were excited and a lot were skeptical.

We knew that if we were going to go in and do anything with the community, it was going to take a level of trust with the neighbors.

As they [Georgia State] were figuring out what to do… the city was funding an LCI [livable cities initiative]. Carter had nothing to do with the development, but we went to these meetings to get a feel of what the neighborhood wanted.

We then started going to the community meetings in Summerhill and since we’ve started doing that we’ve never stopped. 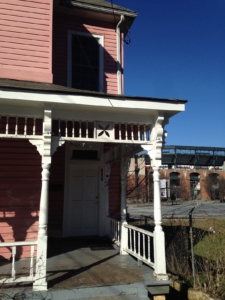 A home in Summerhill overlooking Georgia State stadium. The former Atlanta Braves and 1996 Olympics site is being redeveloped by Georgia State and Carter. Photo by Kelly Jordan

RS: So, do you do anything outside of the official neighborhood meetings?

AP: We want to be a resource to the neighborhood beyond just building up buildings. One thing we’ve done is most recently is in Summerhill there’s Phoenix Park.

It’s over 20 acres of greenspace, and this park was the warm up facility for the 1996 Olympics. The park hasn’t had much upkeep since those days, so we partnered with the Organized Neighbors of Summerhill who did a park visioning plan with Park Pride. That included a financial commitment from Carter but also program managed a playground installation.

KW: Right before Georgia State’s official move in there was a tent city encampment of students and residents. Were you aware was going to happen and when it did, what was the thought process?

AP: We were definitely aware of that. A lot has been written on this and I don’t want to speak on the participants of it. But from what I understand the tent city movement was revolving around the signing of a community benefits agreement as a part of the development.

When you have a large institution like Georgia State which is funded by tax payer dollars, they [Georgia State] were reluctant to do it. From what I understand, that was the crux of that argument of what Georgia State could do to that area.

KW: Now switching gears, to the MET. Why did you decide to get into art as the next phase of development here?

AP: I think the reason why is because there was already a culture of art and creativity here as opposed to trying to create something new. While we have two large-scale projects a mile apart, they really couldn’t be more different.

In Summerhill you have a blank canvas, you have thousands of parking spaces that you have to make something out of. When you think of the MET, you already have a culture of art and creativity here.

KW: Correct me if I’m wrong, it seems like the overall goal is to make this [The MET] the cultural hub of Atlanta?

AP: You could say that. 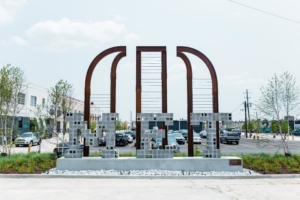 KW: To be honest, I had low expectations when I got here. But once I got here, it was more impressive than I expected it to be.

AP: We didn’t want to come in and make a sense of place, it [The MET] already has that. What we want to do is open this place up and make it a destination.

RS: Can you tell me the actual plans you have for development so that people who live in the neighborhood can have access to the space?

And also talking with the neighbors [and tenants], especially in Adair Park, they say when they want to go places or do something they have to get in a car. They say ‘when are you going to get something that we could walk to?’

Using that direct feedback, we know what neighbors and tenants want. And the biggest answer they all wanted was retail.

So we’ve signed a lease with Land of a Thousand Hills Coffee [as an anchor tenant]. They’re going to have a bakery here, a roastery and a social entrepreneurship incubator.

Land of a Thousand Hills model is very reflective of The MET, ‘maker retail’, so when you look around, it has maker culture and theme.

KW: So how can someone get in contact with you or The MET?

In an era of massive knockdown development, The MET aims to be a bridge between New Atlanta and Old Atlanta. 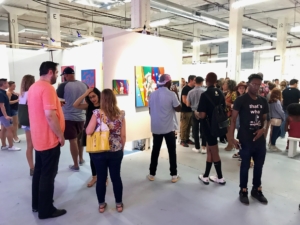 The MET has fully embraced its role as an artistic hub for Atlanta with a bigger goal of including a larger base of artistic endeavors in the city.

MINT, the first W.A.G.E. certified organization in Georgia, committed to paying artists a living wage recently opened at The MET as well as played host to the ‘Brand New Day in the A’ festival featuring such respected brands as Atlanta Influences Everything.

Additionally, Carter has hired local arts collective Living Walls to paint mural at its developments along Georgia Avenue in Summerhill and is aiming at supporting more artists in Atlanta.

In an era of teardown real estate projects and combined with Atlanta’s penchant for destroying anything of historical merit, The MET is a highlight in adaptive reuse for the 21st century in Atlanta.

Previous Article
Budget, emissions present new tests for Kemp
Next Article
Our kids are “At-Promise” for a better future. I know, because I am one of them