A portion of Adams Park, in southwest Atlanta, has been listed on the National Register of Historic Places in recognition of attributes including its landscape design and stonework. 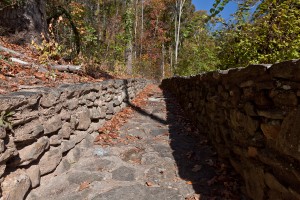 Adams Park is noted for this stonework. Credit: Georgia Department of Natural Resources

The recognition is a reminder of the efforts underway in many of the city parks, in addition to headline-grabbing initiatives such as the Atlanta BeltLine and Buckhead Trail.

The Adams Park designation is the result of work by the Adams Park Foundation on behalf of a park that – like Chastain Memorial Park, in Buckhead – was originally intended to attract residents to the region by offering first-class recreational amenities. The same landscape company worked on Chastain and Adams parks.

Adams Park covers 158.4 acres of rolling land, located east of I-285 between Cascade and Campbellton roads. The park includes a golf course and other amenities typical of one of Atlanta’s regional parks.

The portion designated historic covers just 32 acres of Adams Park, according to an advisory released by the Atlanta City Council to share the recognition made official in the Federal Registry on Jan. 14. Councilmember Keisha Lance Bottoms credited the foundation, including Corliss Claire, for diligence in pursuing the historic designation. 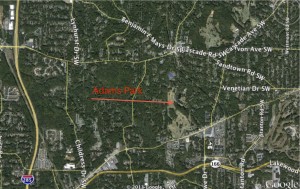 “I am extremely excited to see this dream of ours come to fruition,” Claire said in the advisory. “It took four years and the collective effort of everyone at the Adams Park Foundation to lobby both state and federal bodies, and I could not be more pleased with the result.”

Adams Park was designed by Atlanta landscaper William L. Monroe, Sr., according to the foundation. Monroe founded the Monroe Landscape and Nursery Co. in 1925 and its noted projects, in addition to Adams and Chastain parks, include the grounds of Berry College, in Rome, and the Rabun Gap-Nacoochee School, in Rabun County.

At Chastain, Monroe oversaw the stonework for walls and the construction of the amphitheater itself, according to livinggreenpages.com. Monroe’s company was on retainer with Fulton County to oversee the WPA program (Works Progress Administration, which was a New Deal program to put unemployed men to work during and after the Great Recession). 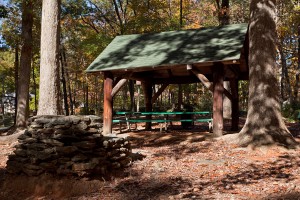 Adams Park is noted for this type of structure. Credit: Ga. DNR

According to the city’s advisory: 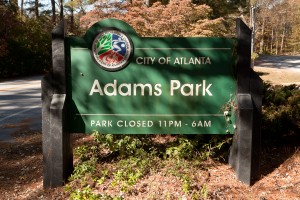