A year has passed since Atlanta Mayor Kasim Reed signed the $3 billion airport concessions contracts, and the FAA still has the city’s process for selecting vendors under legal review. 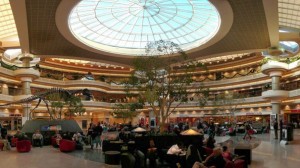 The FAA is continuing its investigation into the process by which vendors were chosen to operate restaurants and shops in Atlanta’s airport, including high-profile locations in the atrium. Credit: visitingdc.com

Reed signed the contracts March 12, 2012. The FAA notified the city in April that the FAA contends four winning firms were not eligible for preferences they received in the city’s selection process, and thus should not be considered.

The Atlanta City Council approved the contracts after Reed’s administration had pressed for a quick vote on its choice of prime vendors to operate more than 150 storefronts. The administration wanted a vote 13 days after presenting its proposal. Ten of those days fell on weekends or holidays.

Late last week, the FAA issued a statement stating that it continues its deliberations into the process by which four companies received preferences that the FAA contends bolstered their bids for contracts at Atlanta’s Hartsfield-Jackson Atlanta International Airport. In response to a request for an update of its review, the FAA reissued a statement it released in December:

The city has maintained that the GDOT certification met the city’s bid requirements for a company’s qualification as a disadvantaged business. The FAA’s letter from April indicates the city itself had a responsibility to ensure the firms were eligible to receive preferential treatment in the selection process:

“The firms should not have been given scoring preference or counted toward any ACDBE participation goal that the Airport may have had in place for the concessions RFP,” the letter states, referring to the federal airport concessions disadvantage business enterprise program. The letter goes on to say that the city “should not count participation of any firm” that should not have been certified as disadvantaged.

There was little time for the council to discuss these types of concerns, and others that were raised, with the administration under the timeline the administration sought for approval of the legislation it proposed on the airport concessions contracts.

Reed’s administration presented its recommendation to the council on Dec. 21, 2011. City Hall was open the next two days, then closed until Jan. 3, 2012 – the day the council voted on the administration’s proposal.

The council debated the proposal for five hours, then approved it. Debates of that extent typically are conducted in committee meetings, providing ample time for research and review.

After the council approved the contract proposal, the mayor waited more than two months to sign the legislation. The signing occurred soon after a Fulton County judge denied one or more motions requesting a restraining order to prevent the mayor from signing the contracts. The restraining order had been requested by a vendor who was not chosen for an airport concessions contract.

At the time, Reed’s administration said it was pushing for a quick vote in order to have restaurants and shops open for the opening of the new international terminal. The $1.4 billion terminal opened May 16, 2012.

When some councilmembers complained of the quick turn-around requested by the administration, airport General Manager Louis Miller said he and his staff would be available during the winter holiday to answer any questions.

The FAA notified Atlanta in a letter dated April 20, 2012 that it had reviewed allegations of irregularity in the certification of some vendors as being socially or economically disadvantaged. The federal government requires the use of a preference program to ensure that disadvantaged businesses have a “fair chance for contracting opportunities,” as the letter states.

The FAA determined that the four companies it reviewed did not qualify for the certification of preference each had received. Other firms that were certified, but not reviewed by the FAA, could also be affected, the FAA wrote.

The FAA did not indicate when it may conclude the review.