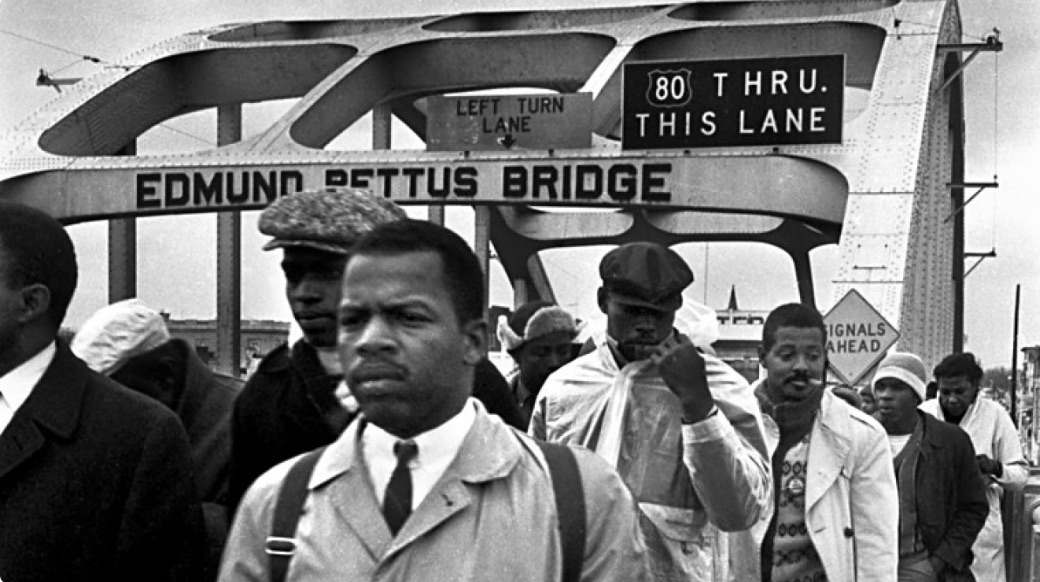 John Lewis at the Edmund Pettus Bridge during a march now being commemorated. Credit: imgkid.com

Atlanta Mayor Kasim Reed is slated to kick off at noon Monday the city’s commemoration of the 50th anniversary of the historic Selma to Montgomery Voting Rights March. 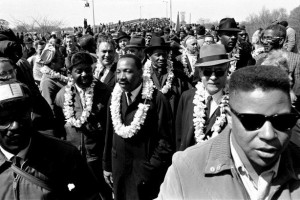 Re-enactors intend to recreate the historic march from Selma to Montgomery (Ala). In this photo, the Rev. Martin Luther King, Jr. and civil rights activists approach the Alabama State Capitol on March 21, 1965. Credit: imgick.masslive.com

The Voting Rights Act of 1965 remains at the center of the nation’s debate over voting laws. Some say the act was the direct result of the march in Alabama.

On Monday, the Georgia General Assembly is slated to vote on House Bill 194. It would curb early voting to 12 days, as opposed to the 19-day period that Fulton County elections officials authorized last year in a purported attempt to increase voter turnout.

Gov. Nathan Deal went on the record in September to criticize DeKalb County’s authorization of voting on a Sunday. The substitute of the bill, approved by the House Government Affairs Committee, appears to authorize the continuation of Sunday voting, though with restrictions.

Civil rights activists are pushing back. The SCLC, for example, has organized a re-enactment of the full 54-mile march. It’s slated to begin March 8, with a commemoration of Bloody Sunday, and end March 13 on the steps of the Alabama State Capitol, according to a statement from the SCLC.

“The right to vote is being challenged at every turn,” Alabama Sen. Hank Sanders said in the statement. “From voter photo ID (modern day poll tax), proof of citizenship to register (modern day literacy test) and reduction in voting and voter registration days to the Shelby County v. Holder decision gutting the 1965 Voting Rights Act and more, Americans are losing the right to vote, which so many people sacrificed their lives and blood to secure.” 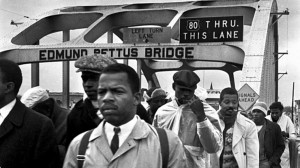 John Lewis at the Edmund Pettus Bridge during a march now being commemorated. Credit: imgkid.com

In the Shelby County decision Sanders mentioned, the Supreme Court decided in 2013 to strike down Section 4 of the Voting Rights Act. The court eliminated the portion of the law that required certain states, including Georgia, to achieve federal approval of changes to voting laws.

Amid this ongoing upheaval, some Atlanta political and civic leaders intend to honor the march that played a pivotal role in the passage of the Voting Rights Act of 1965.

Reed is to begin the commemoration with a group of legendary civil rights leaders including the Rev. Willie Bolden; Dr. Charles Steele, president of the SCLA; the Rev. C.T. Vivian; Juanita Jones Abernathy; Cleo Jones, widow of the Rev. James Orange; and members of the Atlanta City Council.

The mayor’s commemoration includes a photo exhibit of the Atlanta Foot Soldiers. The gallery is to recognize the role Atlanta’s civil rights activists in winning passage of the Voting Rights Act of 1965 through their participation in Bloody Sunday and the Selma-to-Montgomery March.

City councilmembers are to leave this event and return to the Council Chambers. There, they are slated to formally recognize a number of milestones including the Voting Rights Movement, passage of the Voting Rights Act of 1965, as well as:

In addition, Georgia StandUp is continuing to register for a daylong bus pilgrimage to Selma on March 8. Participants are to retrace the steps of the march from Brown Chapel AME Church to Edmund Pettus Bridge and be back in Atlanta by a late evening hour.