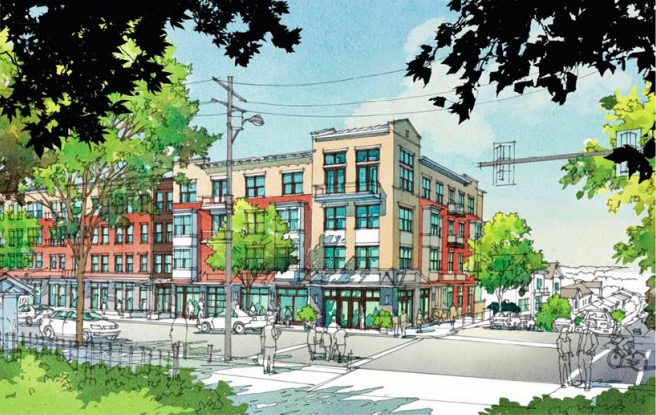 A sketch from the Atlanta Housing Authority shows part of a planned new Vine City development at MLK and Sunset Avenue.

Atlanta’s development agency has voted to sell the city’s housing authority 7.8 acres of land in Vine City for a $60 million mixed-income residential project.

The plan is for the Atlanta Housing Authority and partners to build apartment buildings and single-family homes on part of the block fronting Martin Luther King Jr. Drive, across Sunset Avenue from Herndon Stadium.

The 239 residences would take about two years to develop. Eighty of them are to be priced at market rate, but the rest will be set aside as affordable housing. They will be priced in two tiers so that folks who make less than the area median income (AMI) won’t have to spend too much of their pay to live there.

For example, a two-bedroom unit could cost about $1,010 per month. Here are the detail’s of AHA’s plan:

“We are excited about the concept plan and the opportunity to really activate this portion of MLK,” said AHA’s Ernestine Garey, speaking to the board of Invest Atlanta on Wednesday morning.

The post office on the site would move into a new retail building on the block.

The Invest Atlanta board approved the sale of the land to AHA for $3.3 million, but there was one objection.

By way of background, parcels in this deal are part of the roughly 30 acres that Atlanta and Friendship Baptist Church bought from Morris Brown when the school was in bankruptcy in 2014.

At the time, then-mayor Kasim Reed said a city buy would bring cohesiveness and stability to area communities and the city would embark on an effort to spur job creation, civic engagement and business investment.

The complication is that about 13 of those acres apparently weren’t Morris Brown’s to sell. Under a decades-old deal, that land was to revert to Clark Atlanta University if it wasn’t going to be used for education.

And just this week, Clark Atlanta got what may have been the final court ruling it needed to secure ownership of the land. 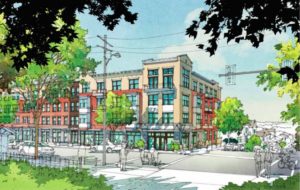 A sketch from the Atlanta Housing Authority shows part of a planned new Vine City development at MLK and Sunset Avenue.

So, fast forward back to this Wednesday morning, and IA board member Julian Bene said he very much supports building affordable housing, but he’s not seen professional opinion that convinces him that the plan is the best way to maximize value.

He said selling this piece of land pre-empts the idea of doing a larger master plan with adjacent land.

However, the rest of his colleagues voted for the sale.

IA President and CEO Eloisa Klementich said she knows this piece of land is a challenge, but that the deal with AHA is a good opportunity to do what the public wants done.

“One of the things that we heard clearly and what we continue to hear is a need for affordable housing, rented and permanent ownership,” she said.

(Read more about the deal and see a map here.)

At the end of the meeting after a private session, the board turned to respond to a bit of recent news.

Federal prosecutors have subpoenaed City Hall seeking records related to spending dating from previous Mayor Kasim Reed’s administration. One of the transactions they’re looking at, according to the AJC, is spending by Partners for Prosperity, an Invest Atlanta nonprofit fundraising organization. Klementich is its CFO.

In just a few minutes after the closed-door talk, the Invest Atlanta board voted to create an ad-hoc committee of four of its members to conduct an independent review of Partners for Prosperity.

The meeting then broke up. Klementich declined comment and an IA spokesperson did not immediately have answers to questions about what the committee’s powers are or what it will do exactly.