Editor’s Note: This story has been updated with information from Atlanta BeltLine and includes a comment from the developer of a potential project near Historic Fourth Ward Park.

The Atlanta BeltLine has a hand in two projects that could add 22-story structures next to the Historic Fourth Ward Park, and eight-story apartment buildings a half-mile north of Piedmont Park. 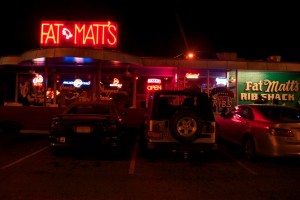 The Atlanta BeltLine has sold development rights that may be used to build 180 apartments and other structures along Piedmont Road near Fat Matt’s Rib Shack. Credit: ohmyomiyage.wordpress.com

At Historic Fourth Ward Park, the BeltLine is seeking to rezone land to a classification that allows buildings up to 225 feet high. The site includes the Masquerade nightclub, located in a stone structure built in 1900.

The planned development is a five-story structure.

Near Piedmont Park, a developer is seeking permission to use development rights it purchased in January from the BeltLine. The additional density would allow 180 apartments, parking deck, and a building to be built along Piedmont Road near Fat Matt’s Rib Shack. A related rezoning request would authorize a height of up eight stories.

The BeltLine is not involved in the proposed development because it terminated its interest in the development rights when they were transferred to the new owner.

The two main proposals were presented Monday to the Atlanta City Council.

The council could vote on the requests before the end of the year. However, such a schedule is ambitious, given that the council is slated to meet just twice before beginning winter recess on Dec. 15.

The BeltLine is the sole applicant on the rezoning request for 3.3 acres that’s adjacent to Historic Fourth Ward Park. The addresses are 670 Dallas Street and 695 North Avenue. The property has 243 feet on the southeast side of North Avenue, across from Ponce City Market.

The request involves three parcels: Two parcels that total 2.1 acres, and involve the Masquerade nightclub and surrounding property; and about 1.1 acres that’s owned by the BeltLine or Invest Atlanta – the city’s development arm that oversees the BeltLine and is chaired by Mayor Kasim Reed.

The site surrounding the Masquerade nightclub could be developed with 22-story buildings, under a rezoning application submitted by the Atlanta BeltLine. Credit: atlantavampirealliance.com

Invest Atlanta put its parcel out for sale in April but remains the owner. The owner of the other property is Poncey Highlands Investors 1, LLC.

The Masquade and its site once was owned by Dean Rioppole, who died in Milton of a heroin overdose last year while seeing a prostitute now charged in the heroin-related death of Google executive Forrest Hayes. The woman, Alix Tichelman, entered a not guilty plea in the death of Hayes, according to latimes.com.

The Georgia Secretary of State has no information about the owners of Poncey Highlands Investors 1, LLC, which was incorporated in 2005.

The BeltLine has asked the city to change the zoning from PD-MU to MRC-3. Here are highlights from the city code about the two categories:

Bike/moped parking must be provided at a ratio of 1 bike space for each 20 vehicle spaces. Permitted uses include residential, and business uses similar to PD-MU, plus funeral homes, gas stations and car washes.

Over on Piedmont Road, BeltLine President/CEO Paul Morris has signed an agreement to sell the development rights associated with a parcel near Historic Fourth Ward Park to Adams Ponce Park South, LLC. The deed did not disclose the price.

In this case, the Atlanta City Council voted in 2013 to remove the development rights from a parcel at 641 North Avenue. The tract also is known as 665 North Avenue and has been developed as an apartment complex, AMLI Ponce Park.

The 51,430 square feet of additional residential density would enable Oak Knoll Apartments, LLC to build a proposed multifamily develop described as consisting of 180 units, 166,500 building and 272 parking spaces within a parking deck, according to the pending legislation.