The Atlanta BeltLine is passing an historic milestone. This one has not been celebrated with a party – though in May it won national acclaim. 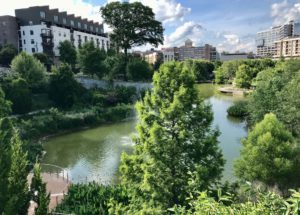 This milestone commemorates the ingenuity of design and funding for one of the BeltLine’s popular attractions – the Old Fourth Ward Park. Specifically, the water pond inside the park.

The water pond and its environs continue to win accolades. In May, the Urban Land Institute named it a finalist in ULI’s 2020 Urban Space Award. It shared the podium with a total of eight public spaces in the U.S. and Canada commended by ULI as:

Now, the city is taking the final legal steps to declare the water pond and its surroundings as greenspace.

At its July 6 meeting, the Atlanta City Council is slated to approve the measure.

This step isn’t to have any impact at all on access to, or use of, the pond and the greenspace around it. Users won’t notice any changes.

The measure is required solely to satisfy terms of the loan Atlanta took out to pay for water pond’s construction. Atlanta’s Department of Watershed Management now has sole legal responsibility for the pond and adjacent area. The change will formally designate the city’s Department of Parks and Recreation as responsible for maintaining the area as a passive greenspace.

The watershed department will continue to opeate the pond and its surroundings. The land specifically is not designated a public park, according to an agreement the council is to approve.

This transfer acknowledges the innovation exhibited by city and civic leaders in the early days of establishing at least this one amenity of the BeltLine. 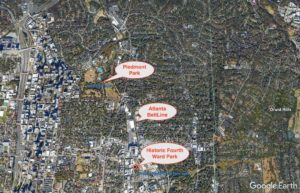 They built consensus for a plan to build a water feature next to the Eastside Trail. They found a way to pay for it by using taxpayer dollars reserved for the purpose of improving the city’s sewer system. The blending of a vision for a park amenity with the court-ordered cleanup of the city’s sewer system was an innovation.

The water feature actually is part of Atlanta’s sewerage system. The lake is officially designated as a detention pond that has, among its purposes, the easing of flooding in a 300-acre drainage basin, plus the cleaning of stormwater runoff before it enters the city’s sewer system. The cleaner water reduces the work required of the city’s sewer treatment system.

The water feature is located in a lowland area of the Clear Creek Basin, which includes the Old Fourth Ward neighborhood. For years, the area had experienced intermittent flooding and sewer overflows of the type not uncommon in some Atlanta neighborhoods before the city agreed to begin an upgrade that has blossomed into a $4 billion sewerage project.

The citywide sewer project is the one funded with proceeds of the sales tax Atlanta voters approved this month, the referendum that provided for an extension of the 1 percent municipal option sales tax.

In addition to mitigating persistent flooding, the detention pond is to help reduce flooding during a 100-year storm event. The pond is designed to accept water from an overall 800-acre watershed and reduce the rate of water flowing into the Highland Avenue Combined Sewer Trunk, according to a report by the Historic Fourth Ward Park Conservancy. 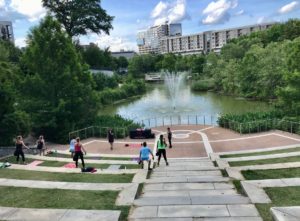 The water pond at the Old Fourth Ward Park will be managed by Atlanta’s Department of Watershed Management, though the area will be maintained by the city’s Department of Parks and Recreation. Credit: Kelly Jordan

The alternative to developing such a detention pond had been the tried and true urban solution to managing stormwater runoff: Laying more sewer pipe and connecting to a treatment system. Debate over this proposal had roiled for years.

The following is the thumbnail description of the project by the engineering company that developed the plan, HDR, Inc., The firm says it practices, “engineering, architecture, environment and construction services:”