By 2024, 80 percent of the corridor will be completed or under construction

When the 22-mile Atlanta BeltLine  corridor was first proposed more than 20 years ago, the Northwest section always was viewed as the most difficult segment to complete the circle.

Most of the BeltLine included abandoned or unused rail lines that could be converted to multi-use trails and transit. But the Northwest portion was still an active railroad line.

The feasibility of the Northwest Trail has been just for the multi-use trails. A separate feasibility study is in the works for a Northwest transit corridor.

This is major progress for the Atlanta BeltLine.

“We are pleased to have an alignment selected for the full Northwest Trail and thrilled at the opportunity it presents for connectivity amongst many neighborhoods and business districts,” said Clyde Higgs, president and CEO of Atlanta BeltLine Inc., in a statement. “For the first time in our history, we have a defined path for the full 22-mile loop. Completing the trail brings us one step closer to building a more equitable and inclusive Atlanta.”

Earlier that day, at the Council for Quality Growth’s “State of the BeltLine” breakfast at the Gathering Spot, Higgs also made another announcement that dovetailed with the Northwest Trail corridor selection.

“Within two years, 80 percent of the mainline trail — 18 of 22 miles — will be completed or under construction,” Higgs said. A map showed that the majority of the four remaining miles, which would still be in a design mode, is along the Northwest Trail. 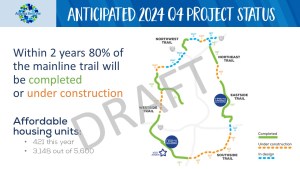 Rob Brawner, executive director of the Atlanta BeltLine Partnership, the private fundraising arm of the project, said the ability to make such progress on building out the BeltLine corridor was thanks to major grants from the Robert W. Woodruff Foundation and the Cox Foundation.

BeltLine officials acknowledged the Northwest Trail continues to be one of the more complicated sections to deliver because of the active rail lines.

Over the past three months, ABI and PATH engaged an outside consultant to provide an economic impact assessment, including extensive outreach and analysis along the Bennett Street business district. Community engagement in the district included two town hall “listening sessions,” information packets, one-on-one interviews, surveys and flyers.

The potential Northwest Trail corridors were analyzed through a lens of equity and inclusion, with the intention to avoid disproportionate negative impacts on different communities. ABI and PATH will continue to study impacts on two primarily Black neighborhoods — Bankhead and English Avenue — as well as Bennett Street, a business district with a concentration of Black-owned businesses. They will pay special attention to access to economic activity centers as a positive impact and the risk of displacement as a negative impact.

The feasibility study process divided the Northwest Trail into western and eastern study areas to determine the most reasonable alignments to advance to the design stage. 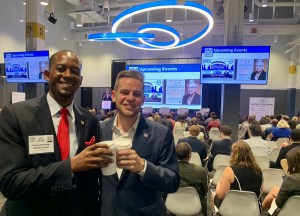 Atlanta City Councilmen Antonio Lewis and Matt Westmoreland attend the “State of the BeltLine” breakfast on Aug. 30 at the Gathering Spot. (Photo by Kelly Jordan.)

The eastern study area, divided into two segments, focused on connecting the future Northeast Trail in the Amour-Ottley commercial district, through Peachtree Hills, and to the Northside Trail by Bobby Jones Golf Course.

The western segments of the Northwest Trail alignment begin at the southern end of the Northside Trail in Ardmore Park and will traverse a portion of Tanyard Creek, under I-75, across Northside Drive, alongside the Hemphill Water Treatment Plant and Howell Mill Road to reach the northern end of the Westside Trail at Huff Road and Marietta Boulevard.

The criteria for the study of Segment 2 were evaluated based on the feasibility of acquiring real estate and ease of construction as well as the quality of the trail user experience, equity and community feedback, taking into consideration the long-term benefits for the surrounding neighborhoods and businesses. Now that will move to the design and engineering stage along with the other segments.

The Northwest Trail will be funded primarily through the BeltLine Tax Allocation District, philanthropic contributions including $30 million from the Cox Foundation and Special Service District bond proceeds.