Advocates of a new football stadium are to get a chance Wednesday to try to convince members of the Atlanta City Council that the city should help build a new facility.

The work session, set for 11:30 a.m., will be the first real opportunity for councilmembers to engage the advocates. Councilmembers already have raised questions about how neighborhoods around the stadium could benefit from its construction and operation. 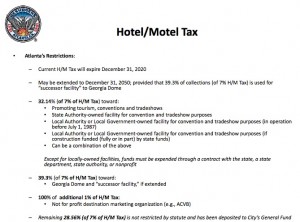 Without the council’s support, Atlanta’s development authority likely won’t be able to borrow enough money to help build the stadium. No funding source other than the city’s hotel/motel tax has been publicly identified to fill the gap between what the NFL and Falcons are willing to pay, and the actual cost of construction.

Atlanta is on deck to provide the loan because Gov. Nathan Deal has said he would prefer to not ask state lawmakers to vote to provide the stadium with financing. The facility is to be built on state-owned land and is to revert to state ownership once the title is clear.

The current proposal calls for Atlanta to borrow money to help fund the stadium’s construction. The debt is to be repaid through revenues from the room tax that’s levied on hotels and motels.

Here’s the crux of the issue facing the council: 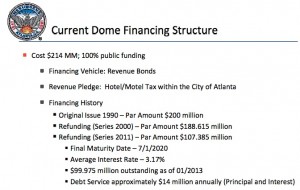 Councilmember Felicia Moore, who chairs the Finance Committee that received the presentations, has said lots of questions remain about the posture of the existing loan on the Georgia Dome. Councilmember Ivory Lee Young, Jr. conducted a meeting last week to gather concerns from neighborhood leaders about what they want from the deal for a facility they contend disrupts their community.

Here’s the status of the current loan on the Georgia Dome, as presented by the advocates:

This information, and a host of other data, is now available on the city’s website.

Brian McGowan, CEO of Invest Atlanta, characterizes the stadium deal as another example of the city’s development arm trying to attract and retain businesses.

“We don’t want companies to leave,” McGowan said Feb. 13 to the council’s Finance Committee. “We are purposefully paranoid about these things. We see the NFL Falcons as no different. Not that any of them have indicated that they are thinking about leaving, but all you have to do is look at the last 25 years. We have to look at its as a threat of business loss.”

Last week’s meeting, which was the first between stadium advocates and the city council, was limited mostly to advocates laying out their facts to support the call for a new stadium. The public notice for the meeting Wednesday indicates there will be more dialogue between councilmembers and advocates:

The work session will be broadcast live on the city’s Channel 26, which also is available via the city’s website. Public comment will be allowed, at the end of the event and with a time limit of 3 minutes per speaker.