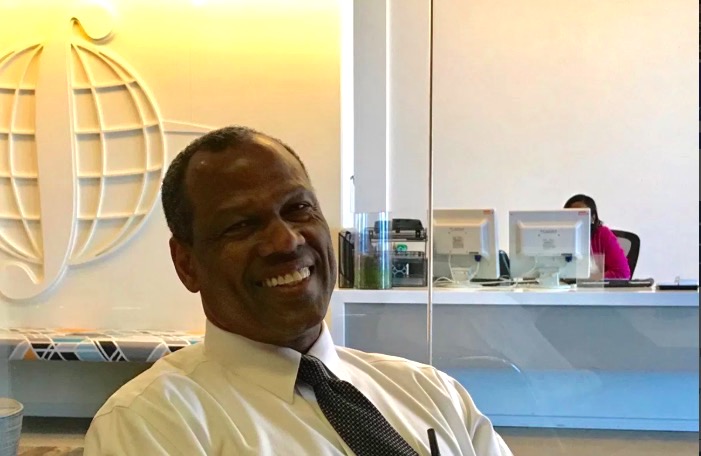 The city of Atlanta is stepping back from a 2017 lawsuit against its former housing authority CEO, the Integral Group and its boss, a longtime and prominent city contractor who’s built mixed-income developments for the authority.

“The city has dismissed, without prejudice, its lawsuit against Integral Development and related corporate entities and individuals,” a city spokesperson confirmed in a text Thursday evening. 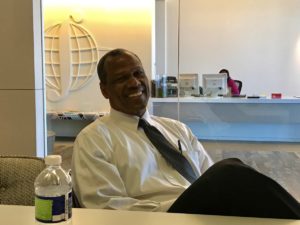 Egbert Perry, founder and CEO of the Integral Group, in a conference room at his company’s headquarters in November. (Photo by Maria Saporta)

In the last month of 2017, the city sued Integral CEO Egbert Perry, the company and related companies plus former Atlanta Housing Authority CEO Renee Glover. The city claimed that Glover set up a sweetheart deal for Perry to buy housing authority land; and that in return, Perry helped Glover get appointed to the board of Fannie Mae, the federal government-controlled mortgage company.

“I’m glad the city decided to drop this baseless lawsuit. There’s more to come,” said Glover, reached by phone Thursday evening. “But the thought that comes to mind tonight is Martin Luther King Jr.’s quote: ‘Let us realize the arc of the moral universe is long but it bends toward justice.'”

Glover headed the housing authority for 19 years to 2013, during which she oversaw the demolition of most of the city’s public housing in favor of a model of mixed-income developments. The model has critics, who say it simply displaces poor people.

But it’s also won acclaim, on the theory that it’s it’s easier to climb up the economic ladder when living in a mixed-income, economically vibrant community rather than in an area of concentrated high poverty.

The litigation dropped by the city is only one of two lawsuits that touch the same property dispute, however.

What’s still going on is a lawsuit by the city’s housing authority versus Perry, Integral and related companies.

“I appreciate the fact that Mayor (Keisha Lance) Bottoms is stepping forward to try to get rid of this abusive litigation,”  Perry said in an interview late Thursday night. “But there were two lawsuits filed, and they were both premised on the same intentionally fabricated  information. So I will hold official commentary until until we have made our way through the rest of the process.”

Perry, however, did elaborate some in a written statement on Friday.

“The city’s case is premised upon an equally frivolous and malicious case filed by the Atlanta Housing Authority, whose board was hand-picked by the former mayor. We are still in active litigation with AHA, but we are very clear that this lawsuit has nothing to do with affordable housing as they claim,” he wrote in part.

The case brought by the AHA has had a hearing, but not a ruling.

“It is going through the process. We have also proposed a mediation. It’s a simple contractural issue,” Catherine Buell, president and CEO of AHA.

Bolden said that unlike the City of Atlanta’s lawsuit, AHA’s lawsuit seeks declaratory judgment in connection to the lack of enforceability of four option contracts between the Integral Group and AHA.

“These two lawsuits are mutually exclusive of one another,” Bolden said. “Each has different parties, allegations, case numbers and each are pending before different judges. To believe otherwise is to ignore the plain facts outlined in each separate lawsuit.”

Integral, in 2011, entered a deal that gave the company an option to buy parcels of land from the agency now known as Atlanta Housing. The land is in four places, adjacent to Integral’s master-planned communities of Auburn Pointe, Capitol Gateway, CollegeTown and Villages at Carver.

What Atlanta Housing’s lawsuit alleges is that the 2011 deal didn’t have the approval of its board at the time — when Glover was its CEO. The land is worth $138 million, according to a report by the AJC citing the authority’s documents. But the sale price is about $17.5 million. The authority’s lawyers have argued the deal — which includes no provision for affordable housing — subverts the authority’s mission.

Integral has defended the deal over the 79 acres in court. The housing authority would keep 50 percent of the profits from the developments — without any of the risk, Perry has said. The plan to construct market-rate housing next to mixed-income housing is an attempt to make sure the communities stay economically vibrant, that they don’t become pockets of the city plagued by poverty.