Atlantans are voting on at least 21 offices today. Check here for updates.

With 95 percent of precincts reporting, Bottoms has 27 percent of Atlanta’s mayoral vote; Norwood has 21 percent.

The Atlanta City Council president race looks like a runoff between Felicia Moore and Alex Wan, with each of them taking more than one-third of the vote.

Council winners in one round of voting are:

Jennifer Ide and Howard Shook (i) are leading their Council races, with about two-thirds of the vote counted.

Mayoral candidate Keisha Lance Bottoms, introduced by Mayor Kasim Reed, thanks her supporters and says under her leadership, the city will continue to be a place of first, second and third chances. 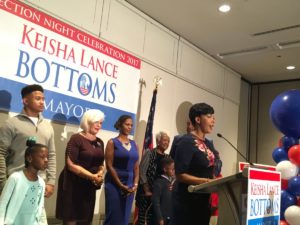 With 73 percent of precincts reporting, Bottoms has 29 percent of Atlanta’s vote and Norwood has 21 percent.

Vote counting is done in some Atlanta City Council races.

Mayoral candidate Mary Norwood said she thanks Fulton County for taking the time to count ballots carefully, even if it takes a while. 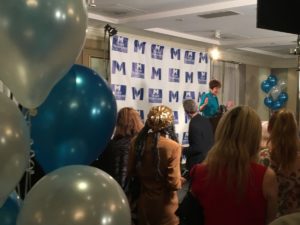 Earlier in the evening, when only 2 percent of precincts had reported, mayoral candidate Ceasar Mitchell told his supporters the night is young. 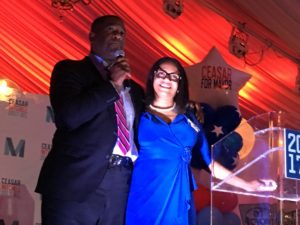 Ceasar and Tiffany Mitchell address his supporters on Tuesday night.

Polls are closed and folks start to trickle in to watch parties. 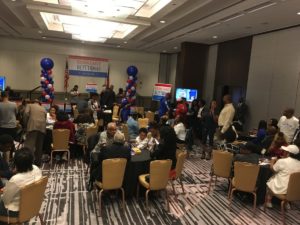 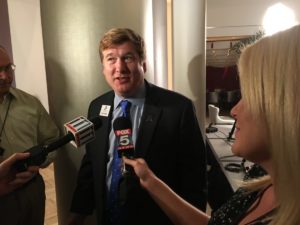 2 p.m. (though we didn’t hear about it until later)

Mayoral candidate Vincent Fort spent the day without one of his top campaign aides, as Tim Franzen was arrested near Fort’s campaign headquarters.

Fort was quoted as saying the arrest reeked of politics. 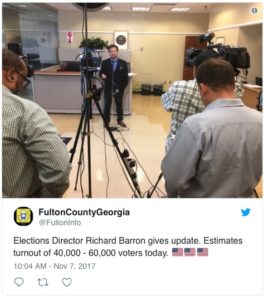 Atlanta polls opened and soon candidates and others started tweeting about casting ballots. Vincent Fort was at the polls early.