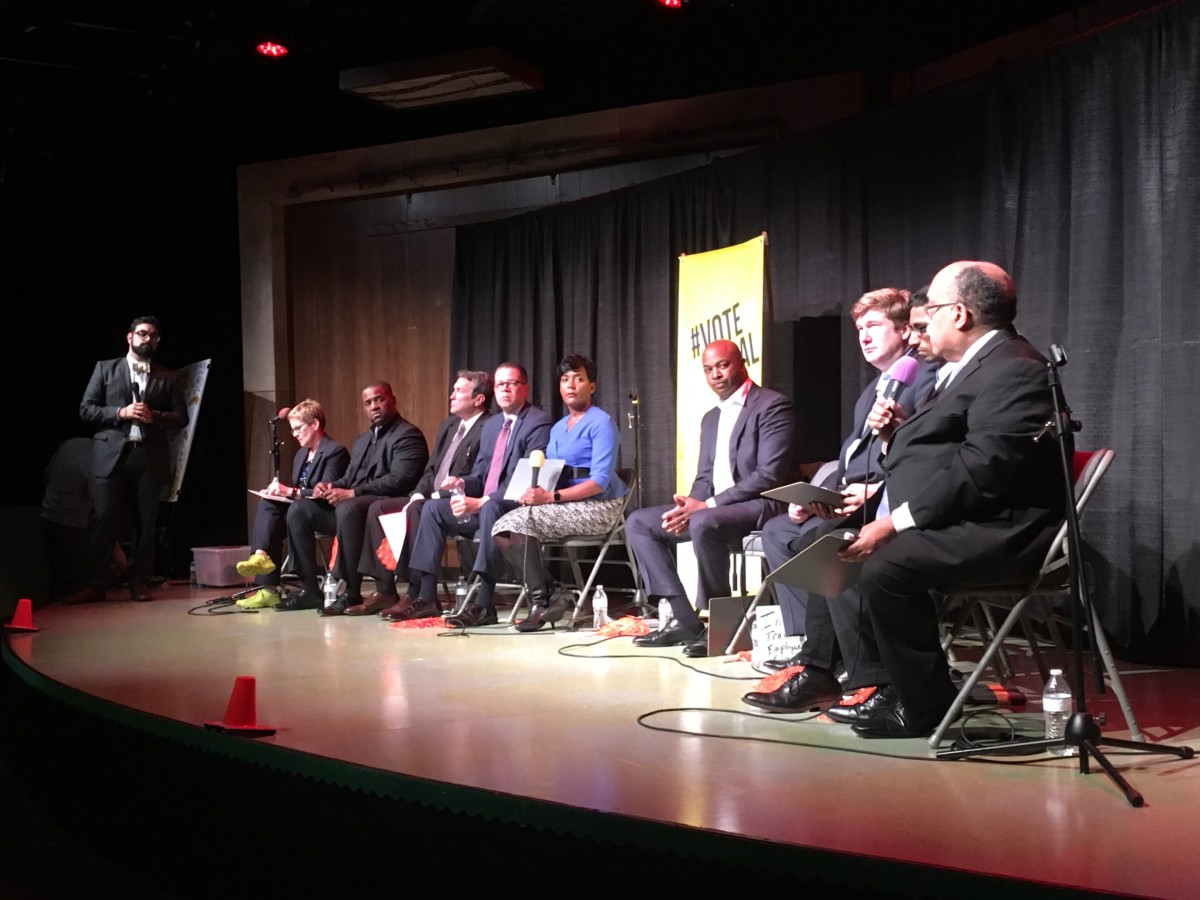 Many an improv troupe has pulled an audience member down to the stage at Dad’s Garage Theater. But a week and a day before Atlanta city elections, it was nine mayoral candidates placed on the stage there to answer unconventional questions.

And they faced an audience of about 200, each of whom had a kazoo.

The darkened theater filled with a hum when emcee Rohit Malhotra asked the undecided voters in the crowd to sound their bright plastic instruments. 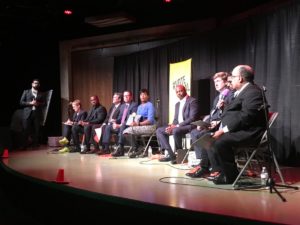 He’s the executive director of the Center for Civic Innovation, the forum host. The nonprofit aims to shape public policy by empowering people. The CCI has already held 90-minute public conversations with the candidates. He framed the forum as something like a job interview.

And it started out with general knowledge questions. The nine candidates on stage knew where the city gets most of its annual discretionary budget, the “general fund:” from property taxes. And they knew the biggest general fund expense is public safety.

And nearly all of them knew which neighborhood planning unit they live in. (Former Atlanta City Council President Cathy Woolard slipped up on that one.)

The nine candidates talked about ways to get people more involved in their NPUs: ideas like more funding for staff and getting the meetings online in some way.

The CCI did publish a Q and A with each candidate. And they have videos of the conversations with candidates earlier this year. And there’s a video of the Monday night forum.

But during the forum, Malhotra brought up a noble episode in Atlanta’s mayoral history, when in 1963 Mayor Ivan Allen Jr. testified in Washington, D.C. in favor of the public accommodations section of what became the Civil Rights Act of 1964. It wasn’t  politically popular with the white mayor’s white voters.

Malhotra then asked the candidates to name what they will stand up for that’s not one of the mayor’s specific duties. “I want to know what your protest sign would look like,” he said, asking candidates to write answers on whiteboards and explain them. Here are parts of their answers, in the order they answered.

Former state Sen. Vincent Fort: “I would sue the big banks for impacts of the predatory lending in Atlanta. The big banks, when they do predatory lending, bad subprime lending in predominately African-American neighborhoods, they don’t maintain the property.  We pay for cutting the grass, cleaning … they evict people, foreclose on people, we pay for it, they ought to be held accountable.”

Former City Council President Cathy Woolard: “No taking rights away from people. I’ve been fighting for peoples’ rights my whole life, from womens’ reproductive choice, to LGBT rights, to rights for people to come here and live here safely, environmental justice, peoples’ right to health care. It’s what I’ve built my career on and what I’ll stand for as mayor.”

Atlanta City Councilwoman Keisha Lance Bottoms wrote a quote. “Education is the most powerful tool that can be used to change the world, Nelson Mandela. I was a magistrate judge for six years and what always struck me is that when men, primarily men came into court, the vast majority of them had not finished ninth grade,” she said. Bottoms said that while schools are the responsibility of the school board, the city must work on education too, or pay. “Education, education, education, is at the intersection of all our issues in this city.”

City Councilman Kwanza Hall: “The Senator [Vincent Fort] stole mine, but I’ll wrap it in: banks give back, no more empty houses, apartments or housing projects. And legalize weed. I’ll fight at the state to make sure marijuana is legal in this state.”

Rohit Ammanamanchi, recent Georgia Tech graduate: “Mine says enough contracts taking advantage of people. By that what I mean is going forward, we need to build a lot of stuff, we need to rebuild a lot of stuff and currently we have contractors that are friends with the city and all we’re getting in terms of motivation is sports stadiums.”

City Council President Ceasar Mitchell: “My protest sign is 100 percent high school graduation in the Atlanta public school system by any means together. For 12 years I’ve had a program called college prep series, we’ve worked really hard to provide a free program for over 7000 kids and their parents to date to get one step closer to college and career.”

City Council member and polling frontrunner Mary Norwood did not attend the forum.

Atlanta doesn’t have a vice mayor — a sort of right-hand person to the mayor. But Malhotra asked the candidates each to name which other candidate they’d like to have in such a post.

Woolard got four votes from the eight candidates left on stage late in the forum, more than anyone else.

As it closed, Malhotra asked if anyone in the audience had made up their mind during the forum.

Only a very few kazoos sounded.

Early voting is already underway at some locations in Fulton and DeKalb.