Atlanta has committed to pay a $500 signing bonus for trash collectors who sign on to help the city end service reductions by a department plagued by staffing shortfalls. 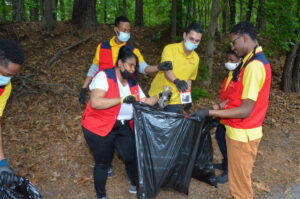 This summer, yard waste collections were cut in half, to twice a month, as the sanitation staff continued to decline. For more than a year, the department has struggled to meet responsibilities that include collecting materials including garbage and trash, recycling and yard waste, plus the task of keeping rights of way free of rubbish.

Atlanta City Councilmember Andrea Boone has worked to resolve the staffing problems. In her Southwest Atlanta district, Boone’s efforts include coordinating volunteer clean-up programs along Martin Luther King Jr. Drive, most recently in May. On Tuesday, she said the bonuses should help.

“The $500 incentive is a great step in the right direction to getting good, quality workers hired,” Boone said. “In six weeks, we will see great improvements in recycling and trash collection.”

Other positive signs include hiring fairs focused on bringing workers into the sanitation department, and renewed efforts by the city’s workforce development agency to steer qualified candidates to these job openings, Boone said. 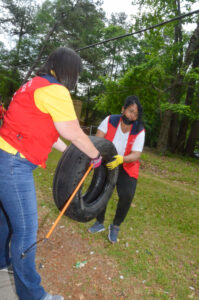 Boone had used the word “crisis” to describe the build-up of waste on curbs during a discussion at the July 13 meeting of the council’s Utilities Committee. Public Works Commissioner Al Wiggins conceded that the situation was not good and that the department was doing the best it could with available resources.

The administration and council intend for the incentives to attract workers to overcome staffing shortfalls. According to the executive order:

Boone held out hope on Tuesday.

“We think this is the right step,” Boone said. “Things have got to improve immediately. The quality of life for all residents depends on how clean our environment is.”

Boone’s focus on neighborhood sanitation continues that of her predecessor in the District 10 seat, former Atlanta City Councilmember C.T. Martin. 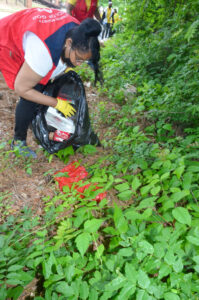 In the early 2000s, Martin said at least once on the floor of the Council Chambers that a staffing shortage in the sanitation department is a good thing. It’s a mark of the expanding opportunities for Black workers in Atlanta. Martin’s words were to the effect of:

Martin later said that trash collection was one of the few jobs typically available to Black men because few, if any, whites applied for the job. The shortage of sanitation workers meant that other jobs had opened, he said.

Voters in Southwest Atlanta first elected Martin to the city council in a special election in 1990 and returned him to office until 2017, when he stepped down to run an unsuccessful campaign for the citywide post of council president. Boone was elected in 2017 to succeed Martin. She’d worked in his council office for some 20 years.

Previous Article
Court to determine if extended-stay hotel guests should be protected by tenant rights
Next Article
Could Georgia’s growing diverse population lead to gerrymandering?