Atlanta Mayor Dickens has proved to be a staunch advocate for investing in local parks and greenspaces. (Photo by Kelly Jordan)

On Monday, April 4, Atlanta Mayor Andre Dickens took the stage at the Georgia World Congress Center for his first State of the City Address. April 4 is an unofficial Atlanta holiday — nicknamed 404 Day after the city’s most popular area code — so it seems only fitting that the city’s mayor used the day to celebrate Atlanta’s culture and its future — especially the future of its local parks.

When Dickens’ stepped up to the microphone, his energy and excitement were palpable. After introducing himself as the city’s 61st mayor, he smiled and added, “It’s been three months, and I still can’t get tired of saying that.”

During the speech, he outlined his key focuses, including affordable housing, education, public safety and local parks and greenspaces. 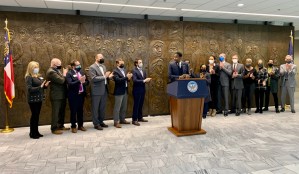 One of Dickens’ first actions after taking office was to establish a Greenspace Advisory Council that will advise the administration on equitable investments in greenspaces, land acquisition for parks, safety and the protection of nature. The council is made up of 13 environmental nonprofit partner organizations, including Park Pride, The Trust for Public Land, West Atlanta Watershed Alliance and Trees Atlanta.

“As we emerge from this pandemic, we have a renewed appreciation for the outdoors. I’m talking about clean and greenspaces where citizens can come together safely,” Dickens said. “We have one of the most beautiful cities in all of the nation, and we want to keep it that way. I believe that everyone, regardless of zip code, deserves to enjoy quality greenspace close to home.”

He also highlighted Park Pride’s recent $2.3 million in grants to fund park improvements across the city, with 60 percent focused on low-income neighborhoods.

He gave the nonprofit a special shoutout, adding, “That is equity in action.”

Dickens also praised local park experts and enthusiasts who have worked to connect Atlantans to the Chattahoochee River, a natural resource that the city has long turned its back on.

“I was born and raised in Atlanta and have heard time and again how great our city would be if we just had a natural body of water. Haven’t y’all heard that?” he said. “Thanks to the work of my good friend and councilman Dustin Hillis and our partners at the Conservation Fund, Park Pride and The Trust for Public Land and Riverwalk Atlanta, we are taking the city to the river.”

The city recently acquired nine acres for Lower Paul Park in Riverside. The new park will eventually connect to a multi-mile trail called Riverwalk Atlanta, serving as one piece of the larger puzzle known as the Chattahoochee RiverLands.

The RiverLands project is a multi-generational initiative by The Trust for Public Land to create 100-miles of an uninterrupted linear network of trails, parks and green spaces from the Buford Dam to the Chattahoochee Bend State Park.

He rounded out his vision for parks by saying, “Together, we are moving Atlanta forward. Did you hear me say ‘together’? Be prepared to hear that a lot because together, we are going to get this job done. Together is how Atlanta has always moved forward.”

To learn more about the folks advocating for the activation and investment in parks, click here for a look at Park Pride’s recent annual parks and greenspace conference.