The proposed investment priorities of More MARTA in the city of Atlanta feels as though we’re coming up short.

In gauging the response of the proposed priorities and timeline of the More MARTA plan, it appears few are satisfied or comfortable with the plan as it stands.

From downtown business leaders to advocates of rail along the Atlanta BeltLine, the feeling is similar. The plan does not deliver the most important transit projects quickly enough nor does it propose modes of transportation that are worthy of a world-class city. 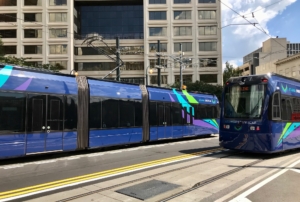 The MARTA board is supposed to vote on the plan at a meeting on June 13. But the board would be well-advised to take another look at its recommendations – this time by aiming high, not low; by truly going for “more,” not less.

“This is a once-in-a-generation opportunity to enhance the transportation infrastructure of our city,” said A.J. Robinson, president of the influential business and civic group – Central Atlanta Progress. “I think we should step back and think carefully about what priorities should be for the first five years so we can make smart decisions.”

In reviewing the proposed plan and timeline, one thought comes to mind – we’re trying to do transit on the cheap rather than putting in place a transit system that will serve us for generations to come.

Several corridors that originally were supposed to be light rail have now been designated to be BRT or LRT. Among the corridors now slated to be filled with buses are the North Avenue east-west corridor, the line to Summerhill near what used to be Turner Field, and along Northside Drive. 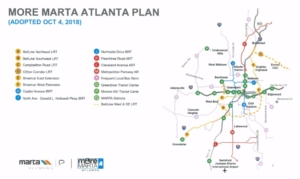 Even Peachtree Street – clearly the most prominent corridor in our city – is slated for ART – not quite what one would expect to have along our signature street.

”I personally don’t think the BRT projects should be the priority in the city of Atlanta program,” Robinson said. “Just because buses are less expensive in the short-term doesn’t make that the right decision.”

With the current More MARTA plan, it feels as though we’re settling for mediocrity –as though we’re trying to do something on the cheap rather than build a system that will be an asset for decades to come.

Imagine if the Atlanta of the 1960s had decided to take the cheap route when it proposed our current heavy-rail transit system. If we had decided to go with buses as the permanent solution, I doubt we would have won the 1996 Summer Olympics, three Super Bowls and countless other major sporting and entertainment events.

And when high-profile companies are looking to invest in Atlanta, they want to be near a MARTA rail station. There’s a reason. Rail represents permanence. Developers are more willing to invest in a place they know will have transit in the ground and not subject to a change in route. 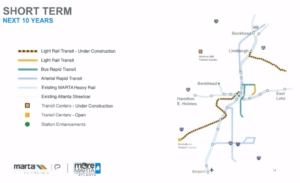 And let’s not forget the Atlanta Streetcar – the inappropriately maligned Atlanta Streetcar. What most people forget is that the 2.7 mile Streetcar downtown loop was supposed to be the first phase of a much more extensive network that included transit on the BeltLine, along North Avenue and even Peachtree Street.

It has been argued that we should have a dedicated right-of-way for the streetcar and any proposed light rail, and there is merit to that argument. At some point in our future, we will have to rededicate pavement that’s been set aside for cars and turn it into transit corridors.

Some proponents for BRT argue that it can work if it has a dedicated right-of-way that acts like rail. Unfortunately, most “BRT” projects never fully live up to that reality. (BRT would make sense if it were a precursor to rail, but that rarely happens).

One problem with the More MARTA plan is that transit advocates want More MARTA sooner rather than later. The sexier parts of the plan – building rail along the BeltLine or along the Clifton Corridor – are slated to be built out by 2040 or beyond – more than 20 years from now.

At BeltLine Rail Now, the “Now” part is as important as “Rail.” That’s why we’re disappointed that MARTA doesn’t plan to build light rail on the full loop until the 2040s. We had high hopes after MARTA’s board voted to include most of the BeltLine on its project list last year, but this plan careens down the wrong track.

An explanation for the stretched out timeline is money – or a lack thereof.

City residents passed an additional half-penny tax for “More MARTA” in November 2017. But to fully build out a robust transit system within the city limits, those dollars will need to be matched with federal and state dollars. 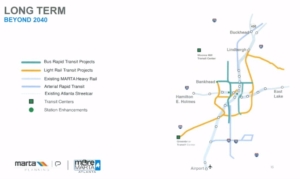 It is hard to know whether future leaders in Georgia and the United States will be more willing to invest in transit. But we do know that more people are moving to urban areas, and there is a growing demand for transit.

Remember the $100 billion challenge made by MARTA general manager and CEO Jeff Parker in January to build a first-class regional transit system over the next 40 years.

We need to be aspirational when thinking about our future transit needs.

A good place to start would be to extend the Atlanta Streetcar to the BeltLine’s Eastside Trail – connecting the downtown business district with the popular multi-use trail.

In short, the current proposed plan falls short of Henry Grady’s vision for Atlanta as the capital of the New South in  1864, when he proclaimed: “We have raised a brave and beautiful city.”

Now Atlanta needs to live up to that ideal by building a brave and beautiful transit system. 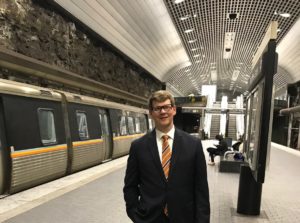 Previous Article
Grooming change agents for tomorrow starts with engaging youth today
Next Article
Ad Nauseam: A Note from the Writer and Director