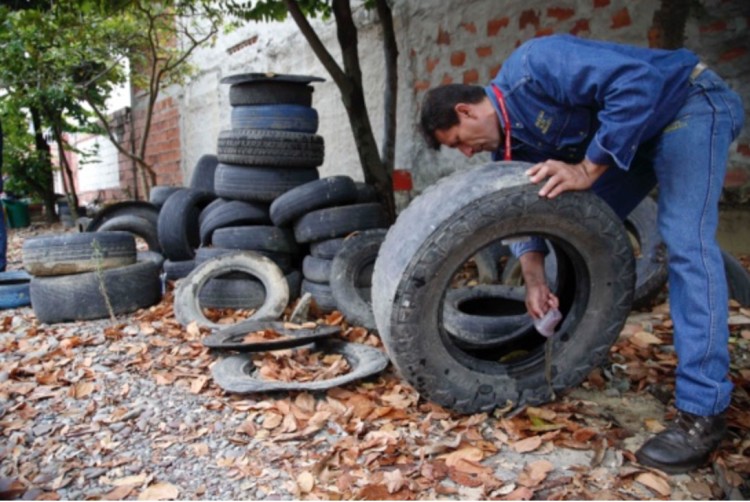 A health worker in Villavicencio, Colombia scoops water from a scrap tire to remove a potential breeding ground for mosquitoes that carry the Zika virus. Credit: macaudailytime.com

The Atlanta City Council pressed ahead Tuesday with an effort to remove scrap tires, which serve as breeding grounds for disease-carrying mosquitoes, as social media displays pictures of workers in another country ladling water by the cupful from scrap tires.

Fears of the Zika virus have prompted a rush of attention from public health officials:

Atlanta’s councilmembers have struggled for years to eradicate scrap tires. Some tires are dumped illegally on vacant tracts of land. Others are stacked in behind homes and businesses. Now the Zika virus is serving as a vehicle for the latest clean-up effort.

Atlanta Councilmember Felicia Moore, the lead sponsor of the proposal, 16-R-3143, frames the control of scrap tires as a public health issue. Tires stored outdoors collect ponds of water that are breeding grounds for mosquitoes.

“We have West Nile virus and now a new virus [Zika],” Moore told the council’s Public Safety Committee. “We need to reduce the vector population.” 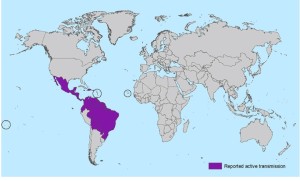 The shaded areas have reported cases of active transmission of the Zika virus. Credit: cdc.gov

Councilmember Joyce Sheperd joined Moore in urging the committee to approve a resolution signed by 10 of the council’s 15 members.

Sheperd said the state has a plan to handle scrap tires. But all it has is a program, she said.

“Unfortunately, no one is implementing the program – that’s the issue,” Sheperd said. “It’s more about implementation than it is about our law.”

The committee concurred. Members approved the resolution and forwarded it for consideration by the full council at its Feb. 15 meeting.

The resolution calls for, “a report on efforts to fight illegal tire dumping and all efforts to remove tires across the city.”

“We were planning to come back with an actual plan of action that was not solely reliant upon the Atlanta Police Department,” Parks said.

Up to three departments should be enlisted, Parks said.

“They [police officers] should no longer, when they get off of cell phones, look at a tire and keep riding,” Martin said. “They should take note of those [tires] and turn them in. Everybody’s got to be involved. Everyone in your departments who are out on the streets can help us.”

Martin is a co-signer of the resolution.