Atlanta has set a two-year limit on the use of money collected from the cutting of trees to maintain city-owned urban forests. The Tree Trust Fund collects fees for the cutting of trees, such as this one at Piedmont Hospital, in Buckhead. Credit: Kelly Jordan

Atlanta continues to tinker with its ordinances to protect trees and the vaunted tree canopy. The city this month has partially protected the Tree Trust Fund and started discussing the formation of a forestry division to manage wooded land. 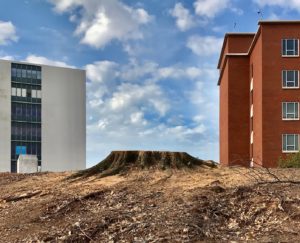 Atlanta has set a three-year limit on the use of money collected from the cutting of trees to maintain city-owned urban forests. The Tree Trust Fund collects fees assessed for the cutting of trees, such as this one at Piedmont Hospital, in Buckhead. Credit: Kelly Jordan

These efforts represent new steps. They are distinct from the review of Atlanta’s comprehensive Tree Protection Ordinance. The TPO review remains ongoing and, by year-end, city officials have said they intend to present a final draft for public review. By way of context, in December 2018 the city anticipated a July 2019 release date for a final draft TPO.

The Tree Trust Fund is the subject of the city’s latest formal action.

Skeptics view the measure as a partial protection because it sets a time limit – but not a dollar amount – for the use of Tree Trust Fund moneys for clean-up and maintenance.

The Atlanta City Council approved the legislation Aug. 17. The new provision sets a three-year limit on the use of money in the Tree Trust Fund to clean and maintain forested land purchased by the city. It does not limit the amount of Tree Trust Fund dollars that can be spent on maintenance during the three years.

The measure addresses a situation that emerged earlier this year. Atlanta agreed to tap the tree fund for a total of $5.3 million to secure and maintain a 216-acre forested land known as Lake Charlotte. This sum included $625,240 to secure and maintain the property, in addition to $4.7 million to purchase the site. The notion of providing maintenance funding created some dissent.

In particular, concern surrounded a proposal that traveled with the legislation but was not funded – a five-year maintenance plan with a projected price of $2.3 million. The clean-up money was to address a situation to be expected with an urban tract left alone since it was purchased in 1989 for a landfill that wasn’t developed – illegal tire dumps and trash dumps have been created as folks entered through breaches in the chain link fence. Councilmembers who visited the site quipped during an Aug. 11 Community Development meeting that on their next visit they’ll bring trash bags and the means to haul off tires. 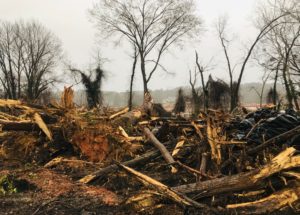 Atlanta did not collect funds for these trees cut at the Bobby Jones Golf Course. The city did not protect the trees before swapping the land to the state. Credit: Kelly Jordan

The Tree Trust Fund legislation was introduced by councilmembers J.P. Matzigkeit and Dustin Hillis. The paper states, in part:

This language replaces a provision that states in part:

A new twist in the conversation is the creation of a city agency to manage the city’s forests. Atlanta City Councilmember Carla Smith said during a discussion of the Tree Trust Fund that Greg Levine, of Trees Atlanta, had floated the idea.

Councilmember Joyce Sheperd supported at least a conversation about Atlanta establishing an urban forestry division. Speaking at the same meeting as Smith, the Aug. 11 meeting of the Community Development and Human Services Committee, Sheperd said: