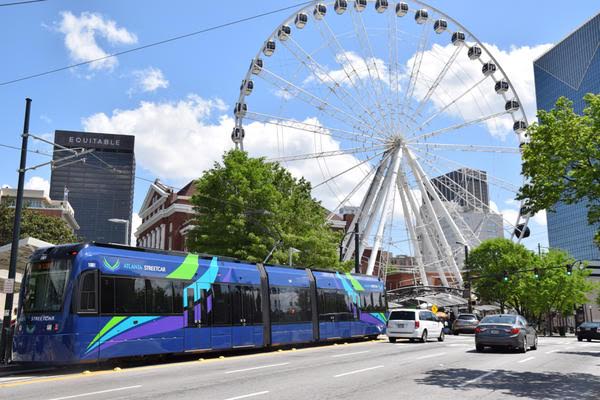 The city of Atlanta is vying for a federal grant to help it extend its streetcar route to the BeltLine.
Credit Alison Guillory / WABE

The city of Atlanta is applying for a $29.3 million federal TIGER 7 grant to extend the Atlanta Streetcar to the BeltLine. Although Atlanta will be facing tough competition for those federal dollars, city leaders believe they have a good case.

The city has been pretty successful in getting funding from the Obama administration. It received $47 million for the first phase of the Atlanta Streetcar, which started operating Dec. 31.

Now the city hopes it will succeed again.

Mayor Kasim Reed has been focused on extending the streetcar line from its current last stop at Ebenezer Baptist Church in the King Historic District to the Eastside Trail of the Atlanta BeltLine near the Krog Street Market.

The 1.8 mile-streetcar-loop would connect the popular tourist destination of Centennial Olympic Park with the transformative BeltLine, a redevelopment corridor that is gaining national notoriety. The extended line will cost a total of $65.4 million and will include two new streetcars, three new station stops and a new power substation.

It also would continue Atlanta’s investment in its streetcar network, which today is limited at best.

Michael Geisler, the city’s chief operating officer, said the vision is to have a 50-mile streetcar system connecting the key areas of Atlanta. But such a vision will have to be built mile by mile.

Critics will argue that investing in the streetcar does little to solve Atlanta’s transportation challenges and that it costs too much for too few riders.

But streetcars could be viewed as only one part of the city’s transportation ecosystem. They can play a key role in providing residents, workers and tourists options to travel in the city — be it on foot, on a bicycle, on a bus or a MARTA train. Streetcars contribute to a walkable city, where one can easily hop on or off, and experience the town in a most personal way.

Streetcars are not just about transportation. They are about a way of life. That’s why there has been an investment of nearly $850 million in development along the streetcar corridor since the route was announced in 2010. And that investment shows no signs of slowing.

The federal government will announce the winner of the TIGER 7 grants in October. If Atlanta were to be a winner again, the more we would be able to show how a streetcar system can transform a city. It’s already happening. We just need more.