Atlanta’s mayor: Discussions of the power of office, and legacy of Maynard Jackson

The potential and the power of the Atlanta mayor’s office was on display Wednesday at two venues – a forum for five mayoral candidates, and a book talk on Atlanta’s 1996 Summer Olympic Games that highlights then-Mayor Maynard Jackson’s vision for Atlanta during and after the games. 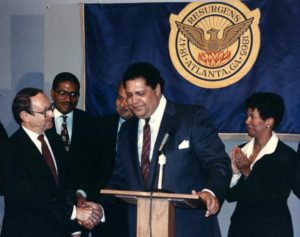 The Twin Peaks vision, incidentally, was this: Atlanta will be a great host city, and Atlanta will not squander the opportunity to leverage the games to make lasting improvements for residents who will remain long after crowds have left.

Jackson’s mantra is a central point in the book, “Atlanta’s Olympic Resurgence: How the 1996 Games Revived a Struggling City.” Two authors, Mike Dobbins and Randy Roark, led the virtual conversation – Dobbins was named Atlanta planning commissioner in 1996; Roark served as director of planning and design for the Corporation for Olympic Development in Atlanta for the 1996 Games. The third author, Leon Eplan, was recruited by Jackson to serve as planning commissioner in the years leading up to the games. Eplan died April 15, just as the book was released.

Jackson’s Olympics legacy clearly has resonance as Atlanta voters prepare to elect a successor to Mayor Keisha Lance Bottoms. Bottoms chose to not seek reelection to a second term in the Nov. 2 election. 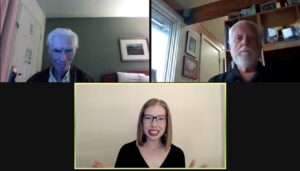 The issues that faced Jackson’s administration as it prepared for the games are similar to some that were discussed at the mayoral forum – transit and transportation, public safety, parks and greenspace, and decent housing that’s affordable to wages paid teachers and firefighters.

Five candidates stepped onto the podium to describe how they would administer the power of the mayor’s office if elected on Nov. 2, or in a likely runoff election. The venue of the Upper Westside Atlanta Mayoral Candidates Forum 2021 was a room in The Works, one of the new social destinations in the emerging Upper Westside, located northwest of Atlantic Station. 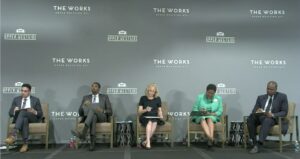 The forum was co-sponsored by the Upper Westside CID and the Northwest Community Alliance at The Works, one of the final projects initiated by the late Scott Selig, president of the Selig Development, an arm of Atlanta-based Selig Enterprises.

Steve Selig, a longtime community volunteer and head of the business, delivered an opening remark that helped set a foundation for the discussion. It reminds of a truism of local governance – potholes need to be fixed, no matter which party is in office.

Please, Selig asked the candidates, fix the troubled intersection of Chattahoochee Avenue and Howell Mill Road. This intersection is a gateway to the Selig-owned venue for the forum, The Works, and the intersection still looks – and functions – as its original role as a truck route to the nearby railroad yards, instead of serving as an easy-to-navigate entrance to an emerging district of residences, restaurants and retailers.

Jackson’s Twin Peaks vision remains relevant in the modern-day exercise of mayoral power, as Dobbins described in his opening remarks:

Note to readers: The Atlanta History Center expects to post a video of the book event no later than July 26 on the center’s website. WABE-FM has posted a video of the mayor’s forum here.