Atlanta will take a month to reconsider a controversial proposal to boost residential density in traditional neighborhoods. In addition, the plan drew significant challenge Tuesday from two ranking members of Atlanta City Council.

Planning Commissioner Tim Keane gave no indication of any intentions to modify the proposed Comprehensive Development plan, in comments at the council’s Community Development Human Services Committee meeting. Keane’s department has been overseeing the revision for about a year. 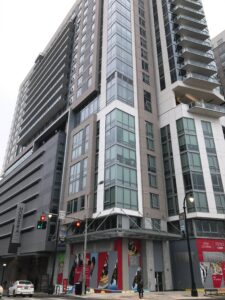 Most residences built in Atlanta in recent years have been in high rise buildings or as houses, while almost no smaller scale dwellings, such as duplexes, have been built, according to Atlanta Planning Commissioner. (Photo by David Pendered)

Atlanta Mayor Keisha Lance Bottoms has espoused support for the plan, which closely tracks urban affairs and housing proposals of the Biden administration. Bottoms was an early supporter of Biden’s 2020 presidential campaign and, Jan. 14, he nominated her as a vice chair of the Democratic National Committee, in charge of civic engagement and voter protection. On May 7 Bottoms announced she wouldn’t seek reelection as mayor.

In the CDHS meeting, committee Chair Matt Westmoreland called on Keane to produce the document used to justify a city population forecast of 1.2 million in 2040. The population forecast is a cornerstone of recommendations in the proposed Comprehensive Development Plan, Keane previously had said. 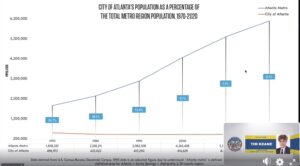 Fifty years ago, 25 percent of the region’s population resided in Atlanta and that rate could recur by 2030, according to Atlanta Planning Commissioner Tim Keane. (Image from Atlanta City Council’s Facebook page)

Recommendations include providing housing for future residents by allowing owners to subdivide a house lot, and sell pieces of land for construction of one or more dwelling units. Another plan is to allow a house near a MARTA rail station to be replaced by an apartment complex of eight units, or thereabouts.

Keane had said the population forecast came from Chris Nelson. Nelson taught city planning at Georgia Tech until 2002 and now teaches at the University of Arizona. Keane said he would provide the document to Westmoreland.

“If we’re designing a city in unprecedented growth, we need to be thinking about what we optimally are designing for,” Keane said. “What would be the best version, for us. Not what we might hope for, what we might put up with, but what is optimal …. for building a city that more people can live in, that can provide all that people need and desire in a city.” 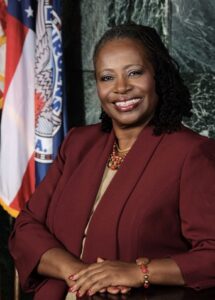 Atlanta City Council Chairperson Joyce Sheperd, chair of the Public Safety Committee and member of CDHS, said her constituents oppose the proposed CDP. The common theme of concern is the plan sacrifices affordable housing in stable neighborhoods to provide dwellings for future residents – whose higher wealth will transform the city’s neighborhoods.

“I’m not sure this is the right approach,” Sheperd said. “Sometimes growing the city doesn’t mean we want to create a whole different type of city.”

Keane responded that he agrees with Sheperd’s views. And that, he said, is why the proposed CDP is so necessary.

“This is not density anywhere and at any scale,” Keane said. “The additional density will be surgical and small.”

Sheperd’s view was supported by a comment in the virtual meeting by one of about 12 observers, who called herself Melinda Walker. She posted two comments:

The CDP is the city’s legal defense against lawsuits that seek to allow bigger buildings than allowed in zoning codes based on the CDP.

The plan now is tentatively scheduled to be discussed in a public hearing Oct. 25 and presented to the council on Oct. 28. The original timeline contemplated a council vote as early as Oct. 4, following a virtual public hearing Monday – which was cancelled at the last minute because of technical problems.

The adopted document is due to the Georgia Department of Community Affairs by Oct. 31, according to a DCA schedule.

Previous Article
In his own words: A new, intimate look at President Jimmy Carter
Next Article
Emory may remake Peachtree-Pine shelter and nearby buildings into sustainability center