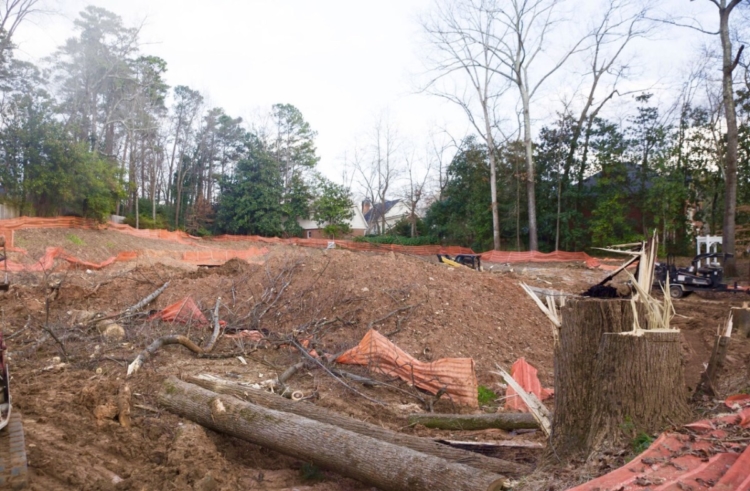 Residents of the Margaret Mitchell neighborhood, in northwest Atlanta, have complained that improper tree removal for the planned construction of three houses has caused nothing but trouble. Credit: Nancy Jo McDaniel

Atlanta’s aged tree ordinance of 2001 looks so good that some folks say they’d be happy if the city would enforce it – until it can be updated. Meanwhile, the city says it’s on track to update the existing tree ordinance in July. 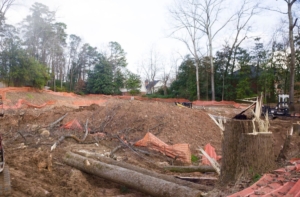 Residents of the Margaret Mitchell neighborhood, in northwest Atlanta, have complained that improper tree removal for the planned construction of three houses has caused nothing but trouble. Credit: Nancy Jo McDaniel

The board of the Buckhead Council of Neighborhoods voted unanimously at its Jan. 10 meeting to ask BCN’s full membership to support a pointed resolution about the existing tree ordinance. The organization represents some 80,000 residents, and some said they’re weary of seeing trees cut on private property with what they perceive as little oversight from the city.

The resolution calls for:

“The resolution says the law of the city should be followed,” Mary Norwood, BCN’s chair, said in regards to the second measure. Norwood became BCN’s chair this year, after serving as a citywide member of the Atlanta City Council and running twice for mayor.

In addition to BCN’s effort, the non-profit organization City in the Forest is advocating a position that calls for putting tree preservation at the beginning of the development process. The current workflow calls for the arborist review of a development proposal to occur near the end of the city’s review, when it’s difficult for an arborist to affect a development plan, according to the organization.

City in the Forest is participating in the city’s review of the tree ordinance. The organization has a four-point suggestion: 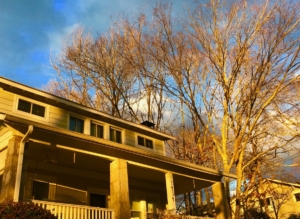 Atlanta’s next tree ordinance should provide greater protection for existing trees in the city, rather than providing recompense for the removal of trees. This tree grows in the Candler Park neighborhood. Credit: Kelly Jordan

A situation that’s attracting local attention is unrelated to either of these efforts. This one involves a construction site in the Margaret Mitchell neighborhood, located about a mile south of the OK Café, on the west side of I-75.

A developer is removing trees in preparation for the planned construction of three houses, as reported in a guest column that appeared Sept. 23 in saportareport.com.

Atlanta has struggled to update its tree ordinance.

The last significant revision of the tree ordinance was in 2001. To put that era into perspective, 2001 was the year the Procenium office tower opened at 1170 Peachtree St., just south of the High Museum in Midtown. It was the year a decade-long cycle of business expansion ended with a recession fueled by the Sept. 11 terrorist attacks.

The 2001 ordinance was to have been updated in 2014. The effort was ditched after developers and residents said they wanted more input.

In 2017, the Atlanta City Council provided $1.2 million to update the ordinance. That money evidently is helping to pay for the current review. 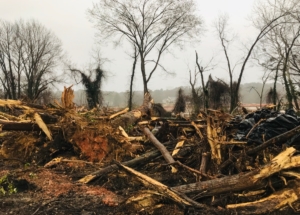 No Atlanta tree ordinance could have halted the cutting of trees at the state-owned Bobby Jones Golf Course. But the cutting galvanized tree advocates to protect the trees they can protect. Credit: Kelly Jordan

The tree ordinance review is being conducted in the context of the city’s first ever Urban Ecology Framework study. The purpose of the study is to:

Atlanta Planning Commissioner Tim Keane addressed the study at the Dec. 11, 2018 meeting of the council’s Community Development and Human Services Committee. Keane said the city would be in a position to turn to the tree ordinance review after the final framework committee meeting on Dec. 12.

In response to a question from committee Chairperson Natalyn Archibong about the city’s involvement in the framework study, Keane said the departments of watershed, parks and recreation, and planning are involved.

The committee’s report observes that the administration expects to complete the new tree ordinance in March, with the update slated to occur in July. Some members expect that timeline envisions a vote by the council occurring in July. They said that part of the process hasn’t been clarified. 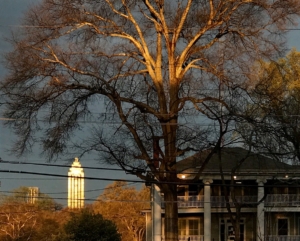