The battle among the owners of Plant Vogtle over its continued construction has led to a lowering of the credit ratings of about $2.1 billion in bonds sold by Jacksonville, Fl. The concern is the city’s reliability to repay its debts, according to a rating action issued by Moody’s Investors Service. 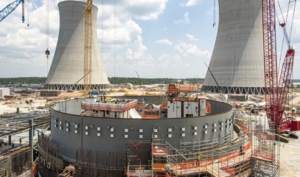 The battle over continued construction at Plant Vogtle led to a downgrade of $2.1 billioni in debt issued by a partner in the project, Jacksonville, Fl. Credit: southerncompany.com

In addition to the credit downgrade, the outlook on the city’s bonds was downgraded from stable to negative. The city’s debt remains at an investment grade, but of a lower quality than before, according to Moody’s rating system.

The action is part of a broader downgrade of the city’s debt that was triggered by lawsuits filed by two partners in the Vogtle project. The parties are JEA, Jacksonville’s city-owned utilitiy, and MEAG, a Georgia utility.

JEA filed a lawsuit in its home county that seeks to void a requirement that its ratepayers fund Vogtle at virtually any cost, MEAG countered with a federal lawsuit contending that JEA seeks to breach its contract and undermine continued construction on the only nuclear plant being built in the United States.

The lawsuits were filed after the latest financial report on Vogtle’s construction progress shows the project to be $1.5 billion over budget. This cost level triggered a mandatory vote among partners on continuing with the project.

The deal to continue included guarantees by Georgia Power to shoulder the cost of future cost overruns for MEAG and another partner, Oglethorpe Power, in the event the overruns reach a certain point, according to a Moody’s report on terms of the deal.

In its Oct. 11 action that downgraded the $2.1 billion in bonds, Moody’s laid responsibility for the downgrade largely at the feet of the two lawsuits and the impact ruling could have on the ability of investors to recoup their money and expected earnings:

The downgrade included the city’s $54.3 million in transportation refunding revenue bonds, and for the city’s $434.6 million in outstanding parity transporation bonds. Moody’s observed in a Sept. 25 rating action:

In observing on factors that could lead to an upgrade, analysts wrote:

In observing on factors that could lead to a further downgrade, analysts wrote:

That said, analysts took the city to task for other concerns about the way it manages its public debt and other financial matters. They include: