Manmade beaver dams have just been installed along a creek in Atlanta’s Blue Heron Nature Preserve and could offer a time-tested, natural method to manage stormwater runoff. 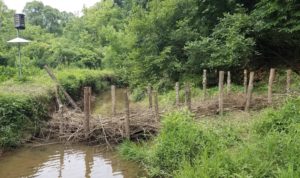 The effect of the manmade beaver dams is the same as natural beaver dams – water backs up behind the dam and forms a pond, where some water can soak into the earth and groundwater. Water that does seep through the dam flows downstream at pace slow enough to not erode creek banks.

These dams represent another tool to control stormwater runoff. They’re not appropriate in many instances, but they can play a part in helping efforts in metro Atlanta to improve the management of water resources.

The idea was sufficiently innovative to earn a spot on the calendar of the annual conference of the Southeast Stormwater Association, scheduled in October. Glen Behrend, Atlanta’s civil engineering manager, is slated to present findings that highlight, “lessons learned from implementing this type of grassroots, restoration approach in an urban setting with an interdisciplinary team.” 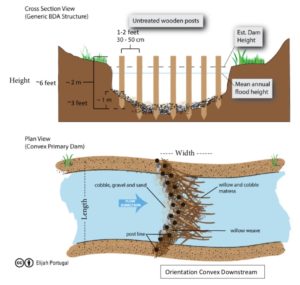 This cross section drawing shows how poles are placed to form the backbone of a manmade beaver dam, with other natural materials woven through to create a permeable structure. Credit: City of Atlanta via Blue Heron Nature Preserve

The state helped Atlanta pay for the dam project with a grant from the Georgia Environmental Protection Division. Georgia’s Nonpoint Source Implementation Grants intend to fund an innovative program that’s led by local governments and a partner in the community, in this case, the Blue Heron Nature Preserve, located along Roswell Road, in Buckhead. The state’s program receives federal funding through a provision in the 1987 amendment to the Clean Water Act.

One past recipient used the grant to fence cattle away from a creek, as was the case in Bulloch County with proceeds of a 2016 grant, according to a series of success stories cited by the federal Environmental Protection Agency.

Beaver dams are a modest method to clean streams, according to Ed Castro, president of ECL, the company that installed the dams at the nature preserve.

Castro also has experience in large-scale projects. ECL is working on the massive project west of the Mercedes Benz Stadium, which includes an underground cistern and to store stormwater runoff captured from a network of swales and other tools installed in the area. 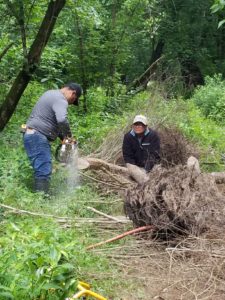 A chainsaw creates the point on a tree trunk that’s to form the backbone of a manmade beaver dam. Credit: Blue Heron Nature Preserve

“The goals, or benefits, are the same there as at Blue Heron,” Castro said. “When you’re in an area like Proctor Creek, and what we’re doing at Cook Park, we’re piping water from the Georgia World Congress Center and putting it into a natural area. Those are very high tech solutions. This project at Blue Heron involves identifying natural resources and working with what you have.”

Blue Heron’s system of dams was built with locust trees harvested from Castro’s tree farm in Newton County. They were nuisance trees and he was pleased to find a good way to repurpose them. The tree trunks became the upright poles in the dam, and branches and underbrush were woven in a horizontal fashion among poles that had been installed in pairs. Each dam runs 12 or so poles wide, depending on the width of the creek at a given point.

“The idea was to mimic a natural approach that a beaver might have,” Castro said. “We’d weave the poplar, the box elder – the biomass – in between the logs, mimicking beavers as they cut it down and start adding material, like a bird building a nest. They’re using a collection of natural resources and building it their way.” 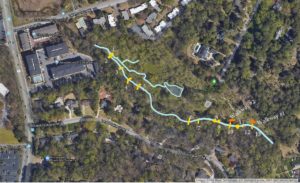 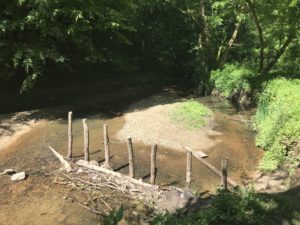 A manmade beaver dam as it appeared in May, during the early days of construction of dams at Atlanta’s Blue Heron Nature Preserve. Credit: David Pendered 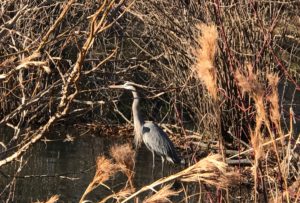 A beaver dam made by beavers in Candler Park has formed a haven for wildlife. Credit: Kelly Jordan