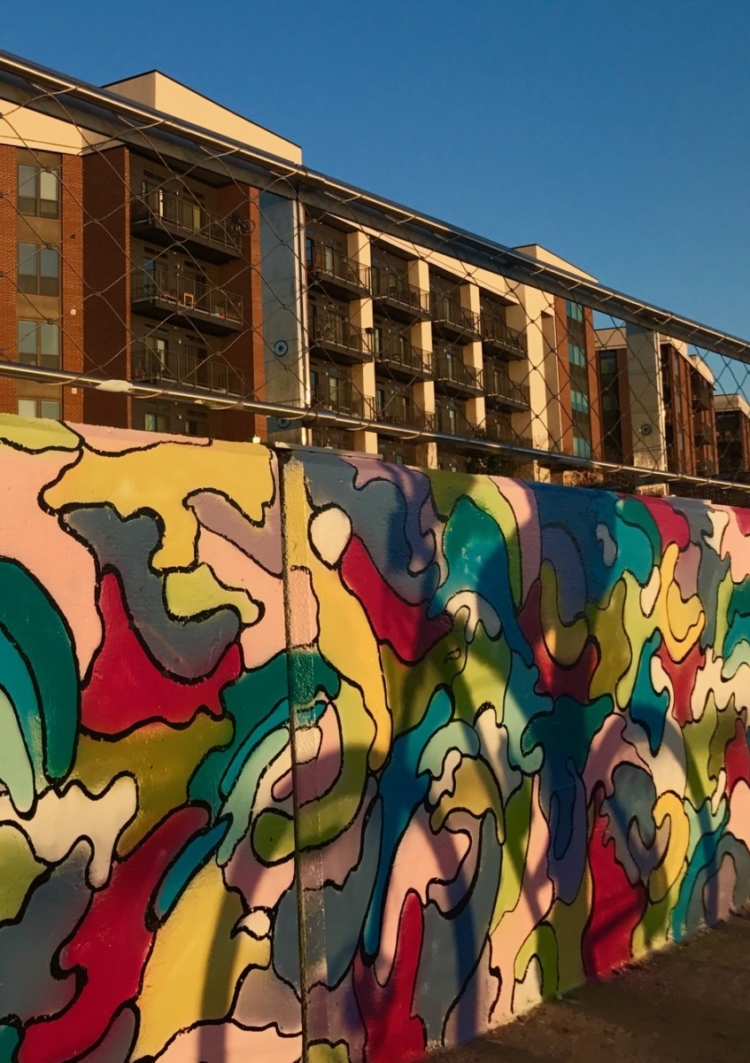 The Atlanta BeltLine has its own requirements regarding affordable housing that are different from elsewhere in the city. Credit: Kelly Jordan

About halfway to its 2030 deadline, the BeltLine has just published a road map meant to help catch the agency up to its promise to build housing that’s affordable for working folks. The agency’s leader says they’ll need help getting there. 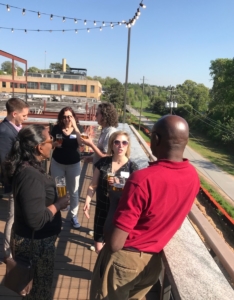 The plan has more than two dozen “action items.” Some are things the BeltLine can do or start singlehandedly, like setting up a line of credit for buying property or cultivating more philanthropic cash to work on buying property.

But where the BeltLine can’t act alone, there are some ways it should align with other entities or encourage policy changes, according to the report. For example, the BeltLine can’t create zoning policy for the city, but it can encourage the city to explore zoning changes that are friendly to innovative housing types, like tiny houses or cohousing. That’s also something the city is already considering.

When McGowan took office about a year ago, the Atlanta Journal-Constitution had recently run a withering report on the BeltLine’s slow pace toward construction of 5,600 units of “workforce” housing along a corridor that’s proven popular with deep-pocketed folks. The BeltLine’s previous boss had just given the agency a “C or D” on affordable housing. Then as now, some folks call the trail an engine for gentrification.

“The BeltLine cannot do it alone,” said McGowan. “That’s the conclusion. But if we all work together, I think we can, we will, reach 5,600” units.

Explaining the report on Wednesday, McGowan returned several times to the idea that the BeltLine is not a housing agency and that it needs to collaborate with entities like Atlanta Housing, the city of Atlanta, Invest Atlanta and the Georgia Department of Community Affairs. He’s said that when he took office, those various agencies were not collaborating.

“The first thing that needed to happen is we needed to get everybody in the room face to face to agree and work better together,” McGowan said.

The report came from a working group organized by the BeltLine and composed of people from several agencies, companies and nonprofits.

On the spectrum of “affordable” housing, the BeltLine focuses on the kinds of places that people like teachers and police officers can afford without breaking the bank — households that make something like $45,000 to about $60,000. Some other agencies or developers focus on yet lower-priced housing that requires deeper subsidies. (Read more about how “affordability” is calculated here.) 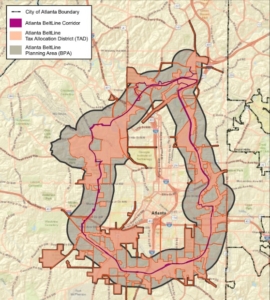 The BeltLine Tax Allocation District, where the BeltLine can tap a set-aside portion of property tax money for affordable housing, is shown in orange. The area omits large parts of the land along the Beltline. In gray is all the land roughly within a half-mile of the trail path.  Click for a larger version.

BeltLine efforts with public partners have built or preserved 1,600 affordable housing units in an oddly-shaped zone that zig-zags around the corridor called the BeltLine Tax Allocation District, according to a list in the report. (That’s orange in the map to the left.)

In that district, a portion of property taxes is plowed back into the BeltLine — and the BeltLine can use that money for affordable housing in that zone.

But big stretches of land along the BeltLine aren’t part of that zone, and so projects in places right beside parts of the BeltLine can’t get money from a key BeltLine fund.

So, the report also addresses what can be done in a wider district, a roughly ring shape called the BeltLine Planning Area, which is pretty much all the land within a half-mile of the corridor. (It’s gray in the map to the left.)

The BeltLine has got to be accountable for those 5,600 units in the TAD, said board chairman John Somerhalder.

“But that doesn’t stop us from saying really what’s important to folks is the planning area … Even if we can’t use the TAD dollars, let’s still facilitate making sure that happens, see if there are dollars that don’t have limitations,” he said.

Looking at that larger donut-shaped area will result in another number and another goal, Somerhalder said.

“And … as part of that we need to look at the opposite, which is: Are we losing units in that area? And make sure we track that as well.”

The board has asked that this road map be reviewed on some regular basis, said Somerhalder.

But it’ll be a different leader that they ask. Getting this report finished and published was one of the last items McGowan wanted to get done before departing for a new job on the West Coast as CEO of Greater Seattle Partners.

BeltLine COO Clyde Higgs will be the interim agency leader as the board and a search firm look for a new president and CEO.