The current Atlanta City Council districts, which soon must be redrawn based on new U.S. Census data, and which Buckhead cityhood would force to change again. (Map by Maggie Lee/Atlanta Civic Circle)

Buckhead cityhood would force a redrawing of Atlanta City Council districts — within three years of an election and a normal redistricting — that could push newly elected leaders out of office and open several unprecedented legal questions.

The Atlanta Board of Education could see major upheaval, too. These scenarios include a nuclear option where the Republican-led Georgia General Assembly unilaterally remakes Atlanta’s council and school board districts.

The domino effect of district changes means that, while a Buckhead cityhood vote would be held only within that neighborhood, the decision would affect the political representation of many and quite possibly all Atlanta citizens.

The core challenge, which has received a remarkable lack of political attention, is that cityhood would nullify all or parts of four Atlanta council districts that currently represent Buckhead. “You don’t get to just plug them in somewhere and not affect all the other seats. It’s a cascade effect,” said Rusi Patel, general counsel for the Georgia Municipal Association, a 537-city statewide advocacy group that opposes Buckhead cityhood as chaotic to bond ratings. He predicts that any option would produce a slew of lengthy lawsuits with uncertain outcomes.

The pro-cityhood Buckhead City Committee (BCC) is sure that positive answers to council and school board districts will be figured out eventually.

“Our team of attorneys and deep bench experienced legislative counsel assure us these matters can and will be resolved,” said Bill White, the BCC’s chairman and CEO, in a written statement. “The City of Atlanta and Atlanta Public Schools Board of Education indeed have options.”

White particularly noted the BCC’s confidence that APS will find a way to continue to operate outside Atlanta’s borders in a new Buckhead City. That would avoid part of a school board redistricting conundrum. But the move would open up another mystery. White and Patel agree — in literally the same words — that Georgia law is “silent” on what happens to the territory of an independent city school district when the city limits shrink. But they differ on the likely result.

“Regardless, we are confident the Buckhead City legislation will provide that APS will continue to serve Buckhead families,” White said.

“I think there would probably be litigation related to that as well,” Patel said.

Newly elected City Councilmember Mary Norwood, whose District 8 is almost entirely within Buckhead, said she has no opinion on cityhood and has no concerns about her district being changed or even abolished.

“I have already said I am not running for a second term,” she added.

Councilmember Howard Shook, a newly reelected incumbent whose District 7 is entirely within Buckhead, did not respond to a comment request.

Before looking at all the complicated ways the political dominoes could fall, here’s how they currently stand. 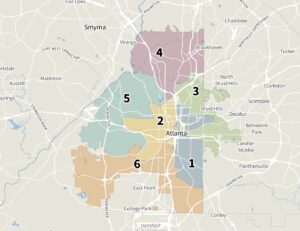 The current Atlanta Board of Education districts. (Map by Maggie Lee/Atlanta Civic Circle)

Meanwhile, cityhood legislation is expected to be considered by the General Assembly in early 2022. If it passes, cityhood would become a Buckhead-only referendum on the Nov. 8, 2022 ballot. And if voters say yes, Buckhead City officially exists. As Patel notes, state law provides for a two-year governmental transition period for new cities, meaning Buckhead City would have to be fully in business by November 2024. That said, state law itself is uncertain, as it only contemplates a new city forming from a county government, not another city, but that can of worms can remain closed for now. The transition would have to include ending Atlanta City Council representation, where Buckhead’s current local districts are 6, 7, 8 and 9.

So take a look at how those timelines overlap if Buckhead City comes to pass. Just months after newly elected City Council members took office and went through a process of redrawing their districts, they would face another reordering of the council that under any scenario is drastic and could include more referendums. And assuming that is all done by November 2024, that’s only a year before the next regularly scheduled municipal election.

Who might do the redistricting is another political question mark. Typically, cities redraw their own districts with state approval. But the General Assembly has the power to unilaterally alter the number and boundaries of local government districts at any time, albeit subject to a state law requiring a referendum for abolishing an office. So, for example, Buckhead cityhood legislation could be paired with a bill that declares new Atlanta City Council or Board of Education districts.

If that sounds far-fetched, consider that a very similar move was made last month in Gwinnett County to local shock and surprise. State Sen. Clint Dixon, a Buford Republican, filed legislation that would redistrict the newly Democrat-led commission and school board, and double the number of commissioners. Dixon is also a co-sponsor of the Buckhead cityhood legislation.

Redrawing all City Council districts appears unavoidable under any option, but there is a question of the extent. The least drastic way — in citywide terms — would be to abolish Districts 7 and 8, which are wholly or almost entirely within Buckhead, and redraw the rest.

However, state law prohibits abolishing an elected office during the term of the person holding it unless voters within the jurisdiction approve the move in a referendum. So yet another vote would be required, and the Atlanta city charter would have to be changed, too. It is unclear what would happen to the new city if voters said no to abolishing the existing Atlanta council districts. In fact, it’s unclear what kind of legal challenges might arise to the whole thing from incumbents, voters or others.

“I think it’s a very good legal question, to be honest,” Patel said when asked what might happen to Buckhead’s Atlanta City Council districts. “I would say that it would be a really challenging legal question.”

As with most other legal aspects of Buckhead cityhood, the situation is virtually unprecedented in legal terms, Patel said. One somewhat similar case was Lee v. City of Villa Rica, which was decided in 1994 by the Supreme Court of Georgia. In that politically sticky situation, the City deannexed the part of town where the mayor lived, effectively booting him from office. He sued, citing that law prohibiting the abolition of his office without a referendum. Patel said the case isn’t very relevant as a legal precedent, but the lawsuit’s year-long slog through the courts is illustrative.

“This Villa Rica [case] shows these things could go all the way up to the highest court of the state,” he said.

Another option for Atlanta would be to keep the same number of City Council districts and squish them all into the remainder of the Buckhead-less city. That would require significant redrawing of districts and almost certainly force some incumbents out of office. Patel notes that is a large and expensive process, especially coming shortly after having already done it in 2022, and could spark lawsuits as well.

Board of Education district scenarios

As for Atlanta’s school board districts, that’s a secondary mystery to the bigger question of whether Atlanta Public Schools (APS) would or could operate in another city. For one thing, the school board said it will fight the cityhood legislation. But assuming the BCC is correct and APS would be forced by the need for tax dollars to serve Buckhead City, the legal ability to do so is unclear.

“While Georgia law makes clear that APS expands with the City of Atlanta, it is silent on what happens when the city limits contract,” said White. “The law does not say that APS shall have the same boundaries as the city.”

Patel agrees with that, though his reading of the very limited case law in the area of schools and deannexations is that it leans towards sticking to city limits. He said the “general thought was [a city school district] expands when [the city] expands, contracts when it contracts,” but the fact is nobody’s sure, and Patel said that means the answer is likely to come from the courts when someone files suit.

A scenario where APS continues to operate in both Atlanta and Buckhead City could mean that its local school board districts remain the same, including District 4, which covers most of Buckhead. For that to happen, the school board’s charter would have to be changed to no longer match its districts to City Council districts, since they would be so different.

A scenario where APS does not or cannot operate in Buckhead City puts the school board in the same boat as the City Council, facing drastic redistricting.