Bud Peterson on 10 years at Georgia Tech: ‘It’s been a great run’ 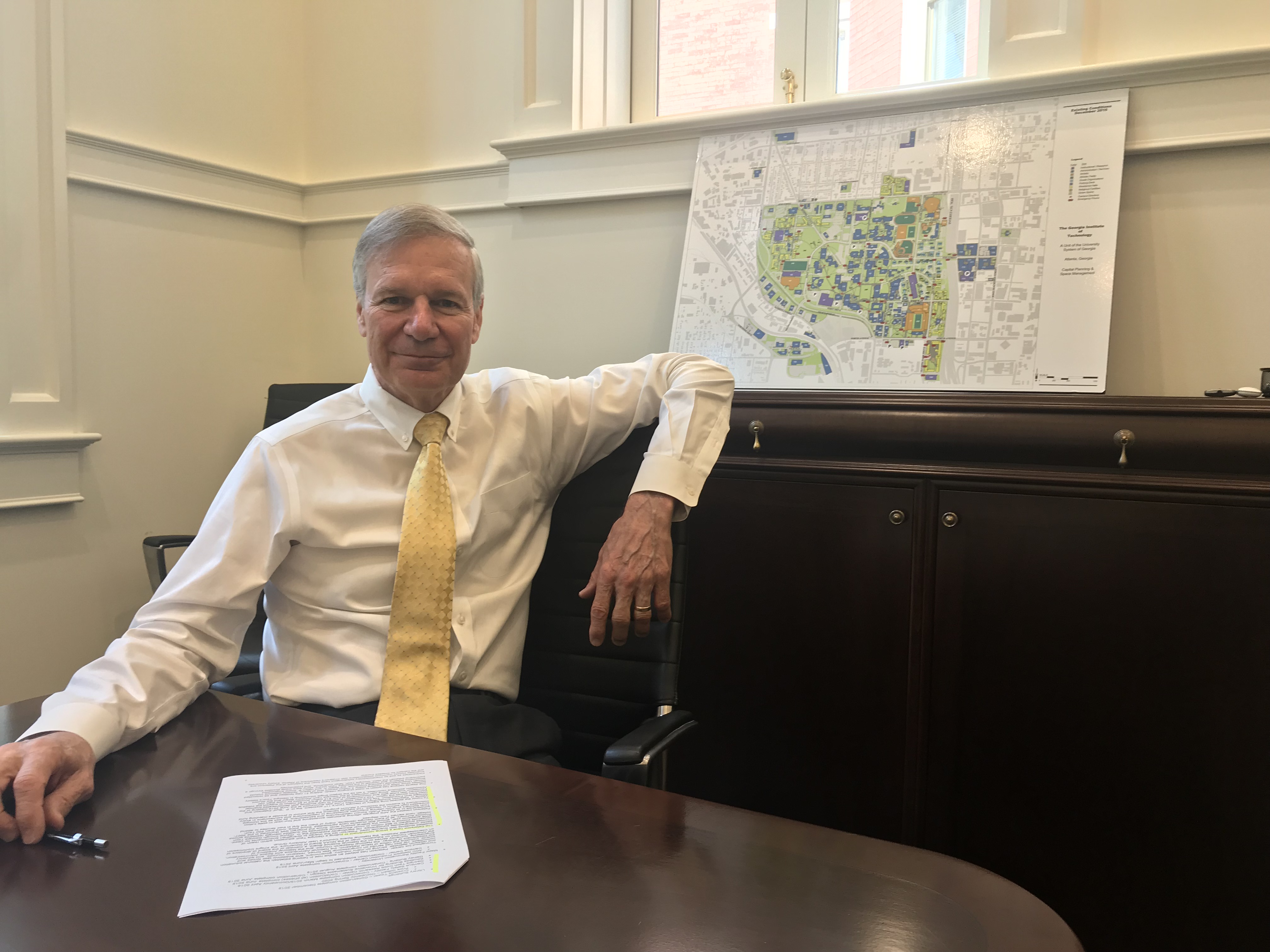 As Georgia Tech President G.P. “Bud” Peterson leaves his post on Aug. 31 after 10½ years, he is proud of the progress the university has enjoyed under his watch – from research, economic development, innovation centers, online degrees, higher academic standards to community outreach.

Peterson sat down with Atlanta Business Chronicle for a 90-minute interview on Aug. 20 when he reflected over his tenure as he prepares to turn over the reins to Angel Cabrera on Sept. 1. Cabrera stepped down as president of George Mason University in July to come to Georgia Tech, where he earned both his master’s and doctorate degrees in cognitive psychology. 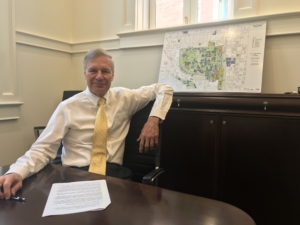 Coincidentally that is the same day Peterson will turn 67.

“I’m going to celebrate Angel’s presidency,” Peterson said with a smile. He also plans to donate most of his 43 gold ties to the campus closet that provides clothes to students. “I’m not going to need them.”

Not that Peterson is going far. He and his wife, Val, have bought a home in Buckhead. He will begin teaching mechanical engineering at Georgia Tech in the winter session, and he will continue his research in heat transfer, combustion and energy systems.

That means Cabrera will have two former presidents – Peterson and G. Wayne Clough – on campus.

“I’ll be on campus, but I’m going to try to stay out of the way,” said Peterson, who said he wants there to be as smooth a transition between him and Cabrera as there was when he succeeded Clough in 2009.

Peterson is not one to wear emotions on his sleeve – he usually leaves that up to his wife. But he admitted being deeply moved in June when the Georgia Tech Foundation surprised them with a $17 million scholarship endowment in honor of the Petersons – $5 million coming from the Foundation and another $12 million from more than 100 Georgia Tech stakeholders. It’s the largest single scholarship endowment in Georgia Tech’s history, and it will help students with financial needs from across the nation.

“Val cried,” said Peterson, who talked about how his family has always taken an interest in children who face disadvantages through no fault of their own. “We had nine foster children over 11 years. These are kids who need help.”

When asked to highlight his accomplishments, Peterson had no shortage of items to point to.

Georgia Tech was asked to join the prestigious Association of American Universities during his tenure. It was the first institution to receive an invitation in the previous 10 years.

Georgia Tech also magnified its impact on economic development and facilities. In all, 21 new buildings were added and 25 were renovated for a total of 3 million square feet. Much of that growth occurred in Midtown, east of the Downtown Connector – a move that began during Clough’s tenure but accelerated under Peterson.

In the past seven years, Georgia Tech went from having one innovation center – Panasonic – to 35 centers and labs.

“The big breakthrough was AT&T,” Peterson said. Among some others are Anthem Inc., Chick-fil-A, Delta Air Lines, the Home Depot, Siemens, the Southern Co. and UCB Inc. Aluminum giant Novelis Inc. is the most recent, announcing plans Aug. 20 for an innovation hub at Tech.

“They have served as a way to introduce companies to Atlanta,” Peterson said. “Our corporate innovation centers are unique. I don’t think there’s another place like that in the country.”

Those relationships also have led to other innovations, such as Georgia Tech’s online graduate offerings, including the flagship Master’s in Computer Sciences.

“I’m hugely proud of that. [Provost] Raphael Bras deserves a huge amount of the credit for having the foresight seven years ago,” Peterson said. “It’s been hugely successful, and it wouldn’t have happened without AT&T and the innovation center.”

As of fall semester, Georgia Tech had 534 masters students enrolled in its computer science program on campus compared to 8,841 enrolled in the online masters in computer sciences. That represents about 9 percent of all masters in computer Science degrees in the country. Online courses helped dramatically increase Georgia Tech’s total enrollment from 19,500 in 2009 to 35,000 today. 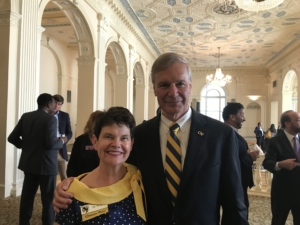 Georgia Tech first family Val and Bud Peterson at a conference at the Atlanta Biltmore on July 31, 2019 reviewing the strides made in the past decade (Photo by Maria Saporta)

The percentage of women students also has increased. In 2009, they made 30 percent of freshman students. Today that’s up to 43 percent.

Of course, Peterson’s tenure also had its challenges. There were incidents of crime against students on campus. And there were serious ethics violations by some former key members of his executive team.

Peterson didn’t want to dwell on those – only saying: “We had some people who were doing some bad stuff. We worked through that.”

The physical and mental health of students has been a focus area for him, leading Georgia Tech to provide comprehensive programs for student mental health and well-being. They also started the Tech Ends Suicide Together (TEST) program.

“We’ve seen increased expectations and demands among our students,” Peterson said. “As a president, there’s no worse situation than to have a student die, especially by suicide.”

He compared the role of a university president to being a mayor with responsibilities for housing, public safety, logistics and operations of its campus. “We have got all the those things that a small city has,” Peterson said. “But I can’t think of a better job.”

A line among some university presidents is that they live in subsidized housing and beg for money.

“I couldn’t disagree more,” Peterson said. “We have an opportunity to interact with the people who are going to shape the future of our country.”

Peterson also acknowledged that he was intimidated to follow Clough as president, partly because Clough is a Georgia Tech alum and he is not.

“Wayne was a great president,” Peterson said. “Wayne has said [his predecessor] Pat Crecine helped position Georgia Tech so we could be successful. And Wayne did the same for me.”

Peterson would like to think he has positioned Georgia Tech well for Cabrera to succeed. The two have worked together in the past with Cabrera actually chairing Georgia Tech’s advisory board early during Peterson’s tenure.

“It’s been an amazing 10½ years,” Peterson said. “Val and I feel very proud of where Georgia Tech is today. It’s been a great run.”