An illustration of what the community-owned, mixed-use building at Dill Avenue and Sylvan Road might look like. Credit: The Guild

Creating an affordable home for small businesses and local residents in a gentrifying area usually means hoping that some far-away developer will throw the community a bone. But at one site in Atlanta’s Capitol View, a social enterprise organization is trying to flip that script with a permanently affordable project the community itself would own and control. 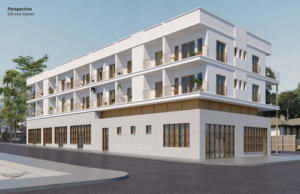 An illustration of what the community-owned, mixed-use building at Dill Avenue and Sylvan Road in Capitol View might look like. Credit: The Guild

The Guild aims to remake a vacant building at 918 Dill Ave., at the intersection with Sylvan Road, as a mixed-use pilot project for a program called Groundcover intended to spread to other properties. On June 18, The Guild and the Capitol View Neighborhood Association will hold a Juneteenth-themed festival in part as a public launch and explanation of an idea so new, it may be the first of its kind in the South, maybe even in the nation.

After all, when have you heard a developer offering to sell local folks shares in a project or saying the main goal is making sure a neighborhood’s longtime Black residents can stay?

“We’re prioritizing legacy Black ownership,” says Nikishka Iyengar, founder and CEO of The Guild, an Auburn Avenue nonprofit focused on building wealth for communities of color. “I think a lot of times what happens with gentrification, a neighborhood becomes valuable because of what legacy residents have been able to do with the neighborhood with nothing…[and that] comes at the expense of them getting displaced. We’re trying to turn that model on its head a little bit.”

The project site is a commercial building around 7,100 square feet in size dating to 1930, according to Fulton County property records, and an adjacent vacant lot. The Guild bought it in November for $450,000, the records say.

The plan is to renovate the building and add two stories atop it. The ground floor would be businesses — maybe a “locally sourced grocery and shared kitchen space for emerging Black restaurateurs,” says the Groundcover website. The housing, currently estimated at 18 to 20 units, would be permanently affordable. The hope is to start construction late this year and finish in late 2022.

The big difference is the ownership model. Instead of profits flowing to a landlord who might not even live in the city or state, the community itself would own and build wealth from the project through a “community stewardship trust.” Residents could buy shares in the project — the target cost is $10 to $100 a share per month — that would entitle them to dividends, long-term equity, and a one-vote-per-shareholder say in the property’s democratically run operations. The share-selling system requires approval by the U.S. Securities and Exchange Commission. 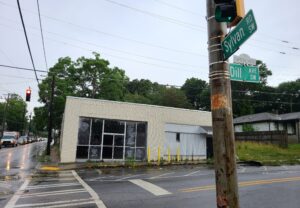 “Our big picture is just around creating community models of ownership of real estate in Atlanta,” said Iyengar.

Such community trusts already operate successfully in Portland, Oregon and Oakland, California. The Guild believes its version is the first in the South and may be the first to build a mix-use project from scratch.

The Guild did not invent the idea locally, however. Activists in Capitol View were already considering the model to acquire other properties, such as the former Masonic lodge about 10 blocks down Dill at Metropolitan Parkway that the City has recommended for historic landmark status. “There was a concerted effort in the past for a community-owned project… so we’re really trying to lean into what was there,” said Avery Ebron, The Guild’s head of community products and operations. Iyengar says The Guild considered the Masonic building and another in Vine City before settling on 918 Dill as the pilot project site.

The Guild’s version of the community trust program is named Groundcover, according to the website, for “the layer of vegetation that protects the topsoil from erosion and drought.” Communities of color, the site says, are “groundcover” for local economies and democracies, but are endangered by gentrification, systemic racism and “capitalism-fueled crises.”

By any name, the pilot project has challenges. Some are faced by all builders at the moment, such as skyrocketing construction costs that caused the pilot project’s estimated budget to rise in a month from $6 million to $7 million without any design change, Iyengar said. Other challenges are peculiar to the effort to preserve a community rather than make the highest profit. 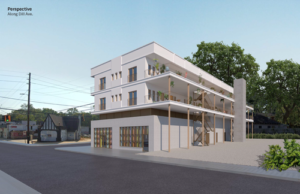 Another concept illustration of the mixed-use building, this time as seen from Dill Avenue. Credit: The Guild

For now, says Ebron, the project’s affordability is based on 60% of the metro AMI. But The Guild is still working with funders and hopes to go lower, with a percentage based on the local AMI. The project would accept government housing vouchers to increase the affordability and would look to partner with housing organizations, including those aiding people who were formerly homeless.

Other challenges include balancing the goals of permanent affordability and wealth-building for shareholders, and how to keep the project itself from contributing to gentrification. “Even when you, quote-unquote, ‘revitalize’ a building or a street or corridor, the positives come with a lot of downstream impacts…. What’s good for some folks is not good for others,” said Iyengar.

But in a city that needs solutions to rapidly rising housing costs and huge racial and geographic inequality in incomes and wealth, The Guild believes it has found one and can work through the challenges to get there. The staff is documenting the process so that, if it’s successful, other organizations might imitate the program.

Legally speaking, housing programs can’t accept only local Black residents, but The Guild is working to let those legacy Black residents know the project is aimed at preserving their community and involving them directly. That’s part of the reason for the festival related to Juneteenth, the June 19 holiday marking the announcement that slaves were free after the Civil War. Iyengar notes that Juneteenth relates to Black land ownership, as early celebrants sometimes had to pool resources to rent land for the festivities due to segregated parks banning them.

The Groundcover version of Juneteenth will be held June 18, 3-7 p.m. The festivities will include a free store, bike tours and a plant share at Capitol View Community Garden. The Groundcover part will include a ribbon-cutting for the project launch at 3 p.m., displays explaining the concept, and an opportunity for public input — including about the looks and the name of the new building. For more information, see groundcover.us.

Correction/update: A previous version of this story incorrectly identified The Guild as a nonprofit, and the story has been updated to reflect that since publication, the Juneteenth event is no longer being referred to as “Dillteenth.”