Atlanta residents appear intent to walk away from federal funding and congressional representation for the upcoming decade, based on response rates to the Census. The deadline is Sept. 30. 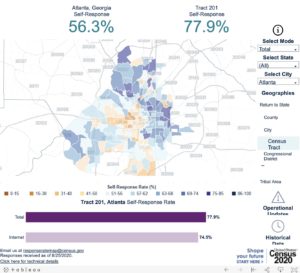 Low response rates predominated in the Atlanta’s lower income neighborhoods. A 16.6% response rate appears to be the lowest in the city and is located in a Census tract located west of the Mercedes Benz Stadium. Response rates in the nearby area are in the range of 20%, 30% and in the 40 percentiles. None are above 50 percent.

Higher response rates have been recorded in the city’s northern and eastern communities – such as Buckhead and Candler Park. Response rates are in the range of 70% to the 80 percentiles.

Overall, Atlanta’s 56.3% response rate, reported Wednesday, is barely changed since the Aug. 4 emergency town hall at which speakers including former gubernatorial candidate Stacy Abrams and U.S. Rep. Hank Johnson (D-Ga.) emphasized that responding to the Census is a matter of social justice.

The statewide response rate is higher than Atlanta’s, 59.9 percent.

The count has economic and political consequences. Federal funding formulas are based on Census counts. Money at stake for some local governments and the state is represented in programs ranging from medical assistance to food assistance for low-income folks, from school lunches for low-income pupils to highway funding.

In addition, political influence in Congress is at stake. Congressional districts are allocated on the basis of population as counted in the once-a-decade Census. 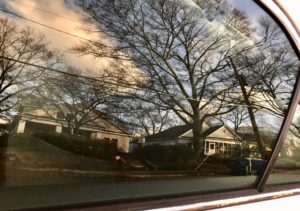 Georgia is expected to retain the current count of 14 congressional seats. The question is how the districts are to be drawn by a General Assembly and governor now in the hands of Republicans. All lines they draw are to start with Census counts and the objective of crafting congressional districts that comprise about 710,000 residents.

While each state has two senators, the number of representatives fluctuates with population – and Georgia has been awarded additional seats over recent decades by virtue of the rising population that’s documented by the Census.

In the City of Atlanta, the response rate was 56.3 percent as of Wednesday. Atlanta was tied with Griffin for a rank 178th out of 539 cities enumerated in Georgia. 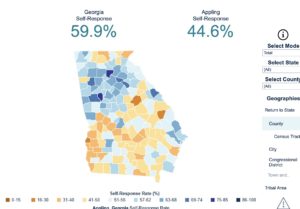 Georgia’s rural communities are submitting Census forms at rates far below those of the urban areas in the state’s northern and coastal areas, according to this heat map of reports submitted by Wednesday. Credit: census.gov

Redistricting will adjust boundaries for seats at the Legislature and county commissions, city halls and school boards.

The state of Georgia had a response rate of 59.9 percent as of Wednesday. Georgia was tied with Texas for a rank of 38th in the nation.

The national response rate is 64.6 percent, as of Wednesday.

Here’s a snapshot of the response rates in metro Atlanta and their statewide rankings:

Sept. 30 is the final deadline to submit a form by Internet and all mail-in forms must be postmarked by that date.