A stunning new report from Oceana compiles all the known harms done by plastic to sea mammals and turtles in U.S. waters since 2009. Georgia’s Department of Natural Resources contributed to findings that were released Thursday. 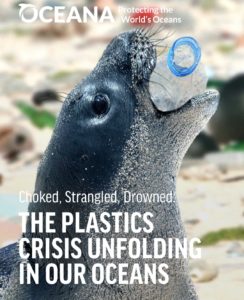 Oceana released Thursday a report it says is the first comprehensive review of the harm caused to sea turtles and sea mammals in U.S. waters from 2009-2020. Credit: Oceana

The report arrives as some Georgia lawmakers reportedly are drafting plastics legislation for the session that begins in January. The potential proposals would seek to reduce the use of plastic bags popular with retailers, or single-use plastics, such as disposable utensils – an approach that has yet to gain traction in Georgia but is gaining ground in states including New York and Vermont, according to a report this month by the National Conference of State Legislatures.

The subject of Oceana’s report is fairly well known – plastic waste is filling the seas and carpeting the beaches of remote islands.

The substance of the report is new – a compendium of all reported instances, in the U.S., of ingestion or entanglements in plastic by sea turtles or marine mammals, from 2009 to early 2020. The report’s sponsor, Oceana, was established in 2001 as a tax-exempt advocacy group focused on ocean conservation. Founders included The Pew Charitable Trusts and the Rockefeller Brothers Fund.

This research is groundbreaking, according to the report. The closest, and only, comparison is a 1994 study of sea turtles affected by marine debris on the U.S. East Coast. Oceana culled data provided by federal and state agencies, and wildlife organizations.

Results in the report, Choked, Strangled, Drowned: The Plastics Crisis Unfolding in Our Oceans, include: 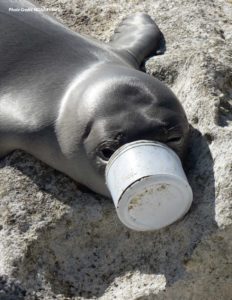 A sea lion appears to have its snout stuck in a plastic container. Credit: NOAA Fisheries via Oceana

And that’s not all, according to a statement by Kimberly Warner, a senior scientist at Oceana who helped write the report: 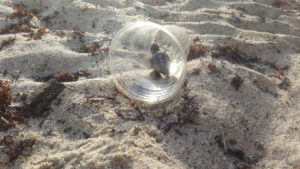 A baby turtle will be trapped in a plastic cup unless the hatchling realizes the only way out is to back up and get out of the cup. Credit: Nova Southeastern University via Oceana

The report’s acknowledgements include the Wildlife Resources Division of the Georgia Department of Natural Resources.

Two Georgia cases are cited in the report. The complete observations state: 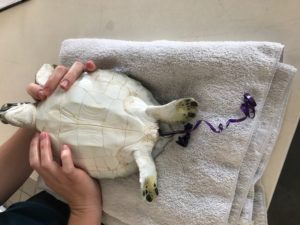 A sea turtle is trying to expel a ribbon that’s likely attached to a balloon. Credit: Clearwater Marine Aquarium via Oceana

Environment Georgia is one of the organizations that has lobbied the state and some local governments to reduce the use of plastics. Executive Director Jennette Gayer said Wednesday the report from Oceana and related efforts highlight the need for governments to create incentives that promote replacements to plastics that are sustainable.

“Our current system rewards waste makers. Disposable products are cheap to manufacture, but they rack up a terrible cost for the environment,” Gayer wrote in an email.  “We need a system that rewards companies for creating reusable, repairable and resilient products and reducing waste.”