Currently, student enrollment at the institution is over 60 percent Black.

Earlier this month, Dr. T. Ramon Stuart began his tenure at Clayton State University (CSU) as the fifth and first Black president of the institution.

“It truly feels good. It’s an honor,” Stuart told SaportaReport. “It humbles me to be the fifth president of this great institution and look to build upon the legacy that was laid by the four previous ones as we look to take the institution to new heights.”

The first African American to steer the school in its 52-year history, Stuart understands the importance of his position.. Representation aside, his focus is on setting an excellent precedent for himself, his administrators and his students.

“I know what my forefathers did to afford me the opportunity to even be able to read and write,” Stuart said, “but I know the things that have gone on in our country and I understand that we as educators need to figure out how to help create a more educated citizen who can critically evaluate issues at hand.”

The position opened at Clayton State when Dr. Thomas Hynes announced his retirement earlier this year.

Stuart says that his predecessor did a phenomenal job with the institution and has built up a solid foundation for him to work with.

Growing up in the small coal-mining town of Welch, W.Va., Stuart realized at a young age the transformative impact that education could have on one’s life, one’s family and ultimately one’s community. That realization has been the driving force behind his motivation to provide opportunities for students to obtain their degrees and excel in their chosen field.

Stuart received his undergraduate and graduate degrees from West Virginia State University in engineering. He later earned his doctorate in higher education administration from Ohio University then began his teaching career as a computer science professor at West Virginia State Community and Technical College.

Recently, Stuart was the provost and vice president of Academic Affairs at Fort Valley State University (FVSU). During his six-year tenure, Stuart says he maintained a 75 percent retention rate and the HBCU increased enrollment, ultimately improving its graduation rate by 15 percent over two years. During his tenure, FVSU led the University System of Georgia in first-time and full-time first-year students. 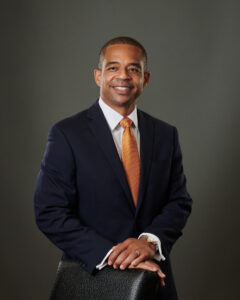 Using the “two ears and one mouth” that God gave him, Stuart knows that he will need to listen twice as much as he needs to speak.

Referring back to the foundation Hynes left, Stuart said, “what I need to do is make sure we go through and inspect that foundation, and then set the expectations of what we’re going to do to grow.”

Being a few weeks into the new position, Stuart has a transition team that will help him create a strategic plan that they will follow to lead CSU.

He says that his list of things to do is exhaustive, but, “we are going to dot the i’s and cross the t’s,” and meet with hundreds of people during the first 100 days of his presidency.

Building relationships with local and state leaders in the Atlanta metro area is also on his agenda for Stuart. His goal is to build partnerships with people who are “willing to meet us where we are and help envision to get to where we need to go.”

At the end of the month, new and returning students will be moving into CSU’s state-of-the-art resident halls, and Stuart says he is looking forward to helping them move in.

There is still time to enroll for the fall semester. Classes start on Aug. 9, which is, coincidentally, Stuart’s birthday.