Participants in a color run wear white and create spectacles like this. (Credit: Color Vibe 5K).

On Friday morning, 60,000 runners and walkers will take off from Lenox Square Mall to Piedmont Park in a traditional quest to break 60 minutes and get the coveted AJC Peachtree Road Race T-shirt.

It’s America’s biggest road race, rooted in a time when running wasn’t popular. Nowadays, out on the multicolored, millennial fringes of outdoor recreation for young adults, the clenched-teeth grind is passé. By turning up the party, color runs have become a popular mixing zone for socializing, sweating, and social media.

If anything was tailor made for the selfie and the “unique shareable experiences” craved by the millennial generation, it’s a color run. An event like the recent Color Vibe 5K in Stone Mountain reflects what surveys say is most important to people who were born between 1981 and 2000: happiness, diversity, sharing, discovery and passion. In that pursuit, they transform and bypass some traditional elements of Atlanta road races.

Starting with a blank canvas

At a color run, anyone can toss some chartreuse or fuchsia nontoxic powder on anyone, be it an attractive stranger or the mayor. It’s fun and messy in the way that pies, balloons, pillows and sometimes even food were for young people in earlier generations. (So right there you have happiness, diversity and sharing). 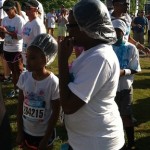 Not everyone wanted colored powder on their bodies, but they still wanted to be part of the fun.

But there’s plenty of build up before the color spreads. Well before the Stone Mountain event’s 9 am start, party anthems blared from huge speakers near a stage, and the crowd swelled with mostly young women with various all-white or light-colored getups. Many favored tutus, because the netting catches the powder and looks cool. They looked like giant versions of the little ballerina in a retro jewelry box.

Because nearly everyone wore light clothing, no one really stood out, each in a version of the same uniform. We were blank canvases, primed for discovery. Adding to the sense of anticipation were the measures of protection: shower caps, sunglasses, bandannas tied around the face bandit-style.

“We estimate 3,000-4,000 people came out volunteers, staff, runners and spectators,” said Ryan “Rowdy” Hall, who from a base in Tennessee sets up Color Vibe 5Ks around the country. This was his company’s first event in metro Atlanta; other companies have staged them, too.

“This is a pretty typical number for our events this year, but we are seeing an upward trend in registrations,” he said. “The amount of support and enthusiasm by the whole community of Stone Mountain made this event fairly unique. The mayor of the town even came out and helped with one of our color stations. That’s probably never happened before.” 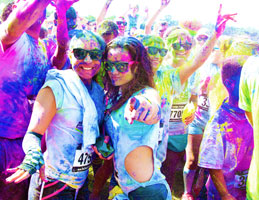 The crowd kept growing, the music got faster, and DJ’s started tossing out powder packs from the stage like the Atlanta Braves spirit team fires free T-shirts into the Turner Field bleachers. More reminders came over the loudspeakers: don’t forget to publish to social media. Checking in on Facebook, tweeting, Instagramming before and after—the color run is an intensely photogenic, ephemeral event where anyone can be the star for 3.1 miles of walking or running at whatever pace. Posting the evidence proves your passion.

The “look at me” culture is rife among millennials, according to the Pew Research Center. “They embrace multiple modes of self-expression. Three-quarters have created a profile on a social networking site; 1 in 5 have posted a video of themselves online. Nearly 4 in 10 have a tattoo, and for most who do, one is not enough: about half of those with tattoos have two to five and 18 percent have six or more. Nearly 1 in 4 have a piercing in some place other than an earlobe, about six times the share of older adults who’ve done this.”

The Color Vibe participants were documented, like it or not. As the runners and walkers moved through the course, through showers of what appeared to be blue, pink, purple and green Kool-Aid, a crew of corporate sponsored photographers, with cameras strapped to poles, moved through the crowd. The photographers gave out paper wristbands with the sponsor website where the photos would be posted, so the event and its advertisements would continue when the participants went online.

“Make sure they feel informed and involved, not just marketed to,” said Katie Elfering, a consumer strategist, in a recent Forbes.com article about millennials—who at 50 million or so represent the largest demographic group in the U.S., with buying power estimated at $1.68 million.

“The brands that give Millennials a reason to engage, whether that’s branded content like what Intel has produced, or creating an experience that they couldn’t have without the brand, like many of Red Bull’s events, have figured out how to connect to this generation in a meaningful way. These brands have figured out how to provide what matters most to Millennials in a way that is additive to their lives and entertaining, which in turn compels them to share their experiences with their friends.” 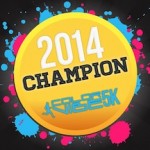 Social media badge for participating in an untimed race.

Millenials know how to do that, because they are distinguished by their use of technology. “It’s not just their gadgets — it’s the way they’ve fused their social lives into them,” the Pew Research Center reported. As a very late baby boomer, I needed a nudge and instructions—and got both after the 5K when I opened my email.

“Congratulations Champions! The Color Vibe Team would like to thank you for attending and congratulate you on your amazing 5k accomplishment! To celebrate your experience and achievement, make sure to wear your Champions Badge loud and proud on Facebook, Instagram, and Twitter!”

I passed. The feeling of running 3.1 miles was great, and so was the camaraderie. But the only thing I was champion of was not walking, and so were several hundred other people.

Not exactly the end of Peachtree 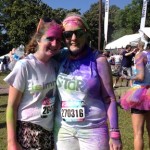 What my daughter and I looked like by the end of the Color Vibe 5K.

This color run left our group dusted with sherbet-colored talc and smiling hugely. No one had yelled splits at us; this was more about fun than fitness, more about the journey than the finish line. Instead of winning a T-shirt, we had started out with one you could wear and get decorated along the way. Or wash the color out if you want. We started talking about the next color run and signing up.

Color runs are “a reason to do something healthy without calling it exercise,” Hall said. “We use the music and the color to let people have fun. Our events aren’t timed. They aren’t competitive. The only purpose is to have fun and get colorful. It’s not intimidating and I think people really respond to that. It’s something everyone can do.”

On the park lawn where participants gathered after the event, a large community canvas was spread out for signatures and drawings. This reminded me of what was missing: a greater cause like eradicating hunger or curing diabetes that is part of so many road races or fun runs. Color runs are largely profit-makers, and the main cause is personal pleasure.

Which brings us back to millenials who, granted, weren’t the only participants in the Color Vibe 5K. They are credited with the “YOLO” (you only live once) mindset, and that’s what a color run is all about.

Michelle Hiskey can be reached at michelle.hiskey@gmail.com.