A map showing the two parcels of the former Gun Club Park in Northwest Atlanta, as seen in a preliminary environmental assessment report issued in 2020.

The City Council has given a thumbs-up to a deal that would give the former Gun Club Park in Northwest Atlanta to developer Brock Built in exchange for an unspecified number of affordable housing units, developed green space, and a small parcel of land the developer currently owns. As of now, the deal is lacking specificity, but it’s already raising concerns about open bidding and the Trust for Public Land‘s longstanding effort to start a public visioning process for the site.

The deal to give the 44-acre woodland to Brock Built and receive the developer’s 12.6-acre property in Collier Heights in return was made non-binding — essentially up to the mayor to decide — before its Nov. 15 approval due to City lawyers’ concerns about lack of competitive bidding for public land. Despite the council’s unanimous approval — on its non-discussion consent agenda — no one involved is eager to talk about the deal, including the developer and City Councilmember Dustin Hillis, the legislation’s sponsor. The City press office offered only brief, inscrutable comments that did not clarify whether the administration will move ahead with the deal, conduct an open bid and public process, or neither. 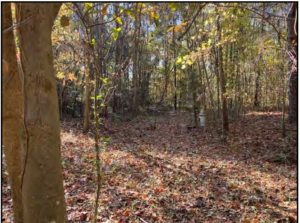 A view inside the woodland at the former Gun Club Park, as published in 2020 preliminary environmental assessment report.

The origins of the deal with Brock Built remain unclear, but the company is well-known for its many housing developments in the metro area as well as its generous campaign contributions to many Atlanta elected officials. The company has a housing development called West Highlands just on the other side of the creek from the former park, with homes selling in the $450,000-and-up range, according to its website. Brock Built also was recently involved in another political deal in the area, where it agreed to a proposal brokered by Hillis and City Councilmember Matt Westmoreland to sell a 31-acre Bankhead site to Atlanta BeltLine Inc. for affordable housing, reportedly at a discount.

In the Gun Club deal proposed by the council, Brock Built would be given the former park and would give the City a parcel on Hamilton E. Homes Drive that is said to be suitable for parkland. On the Gun Club site, Brock Built and partner Lynch Development Group — which also did not respond to a comment request — would build single-family homes and a “publicly available and developed green space.”

Brock Built would commit to 20 percent of the houses to be priced at or below 80 percent of the area median income, with the household size for the calculation not specified. The green space would be 20 percent of the property, or 8.8 acres, and must include a pavilion, a playground, and a multiuse trail and pedestrian bridge to the Proctor Creek Trail.

Brock Built would pay for any environmental cleanup. The company also would have its tree-cutting compensation fees capped at $5,000 per acre.

A fundamental assumption is that the two properties being swapped will be similar in value once affordable housing and cleanup costs are factored in. As part of that consideration, the council ordinance authorizes Brock Built to conduct a confidential “phase 2” environmental assessment of the site. If Brock Built’s Collier Heights property ends up being valued higher than the Gun Club property, the ordinance gives the company the “sole option” to pay the difference to the City in cash. If the Collier Heights property is valued lower, the company likewise gets “sole discretion” to waive receiving a payment for the difference.

The Trust for Public Land (TPL), a nonprofit that assists in the creation of public parks, has been working for about three years on a similar concept for affordable housing and green space at the long-shuttered park and an adjacent 129-acre landfill. TPL and another nonprofit called Groundworks Atlanta aided the City in funding and conducting a preliminary environmental study, which was completed early last year. The TPL, which proposed the City remaining the owner and a public visioning process, was surprised by last month’s emergence of the Brock Built deal.

“We were disappointed that our efforts to work with the City to clean up the site and repurpose it as parkland and affordable housing have not been moving forward,” said George Dusenbury, the TPL’s Georgia state director, in a phone interview. “It’s our hope that there’s still an opportunity. We think that our proposal makes the most sense for how we should address the property. We’ve been working for three years to get the City to allow us to clean up the site so it can be used for a better purpose.”

In written statements provided through spokesperson Michael Smith, the administration emphasized that the council’s Brock Built ordinance is non-binding and said it believes it has no “formal agreement” to work with TPL, either. “However, it should be noted that the City must conduct a great deal of due diligence on the recommendation before we can begin any conversations with Brock Built on the matter,” the administration said.

But there was no response when SaportaReport repeatedly asked whether the City will conduct that due diligence. As for the idea of an open bid for the land or a public visioning process, the administration also would not clarify its intentions. “Regardless of the non-binding request of the council pursuant to the ordinance, the City has made no assertion that it shall not conduct an open bid process and/or conduct a public visioning process in regards thereto,” was their response. 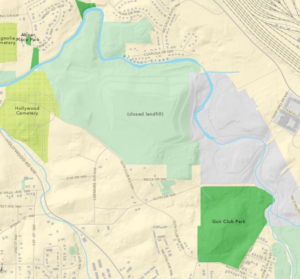 A Trust for Public Land map of the former Gun Club Park and the nearby landfill, both of which would be part of the nonprofit’s reuse vision.

Apparently underlying both the Brock Built and TPL concepts is impatience over the future of the former park. The site is among many City-owned parcels listed in the recent “Atlanta City Design Housing” policy vision as spots for lower-density affordable housing to address a supply crisis. The Department of City Planning declined to comment on the Brock Built and TPL situations.

The former park consists of two wooded parcels north of the intersection of Gun Club Road and Ruth Street, bordered to the east by Proctor Creek. As the name suggests, it was the site of several shooting ranges from roughly 1928 to 1957, according to the environmental study. It appears to have become a City park in 1964, with such recreational facilities as a basketball court and baseball fields appearing in photos. According to the City Council legislation, the park was shuttered in 1996 and formally removed from the list of parks in 2004, apparently to cease maintenance responsibilities. The property, though, remains City-owned.

The environmental study assumes that the site is contaminated with lead from bullets and shotgun pellets from years of gunfire. If that assumption is correct, cleanup costs would be a significant factor in any reuse or redevelopment concept.

The TPL says it prepared to conduct such cleanup as part of its concept, which includes both the former park and the shuttered City landfill about 100 yards to the northwest. “This largely vacant land presents a canvas for creating the sort of equitable development that Atlanta needs to improve quality of life and address the lack of affordable housing that challenge[s] our community,” says a TPL fact sheet about its proposal.

Dusenbury said TPL has proposed a deal where the City basically gives the nonprofit the land for the cleanup, and then the nonprofit would return it to the City. Various funding sources are available for such cleanup, he said, and TPL has experience in aiding park funding. One example is the remediation and community vision process for the new Rodney Cook Sr. Park in Vine City, where TPL raised over $14 million for construction while the City paid for remediation.

Free house, furniture is prize in benefit for Atlanta Mission: No donation required