A parking lot that makes up part of the Gulch Downtown. Credit: Kelly Jordan

A Fulton County judge says Atlanta followed the rules when a split City Council OK’d bond-backed public subsidies for a proposed private remake of Downtown’s Gulch. Opponents will ask a higher court’s opinion, in a dispute that’s gone on for almost a year.

In his order, Judge Robert C.I. McBurney of the Superior Court of Fulton County described the timeline of city, Atlanta Public Schools and Fulton actions on bonds that would help pay for the “Centennial Yards” development in the Gulch.

He wrote that “the record establishes that these proceedings were lawful and that the requisite statutory procedures under the Revenue Bond Law were lawful.”

Julian Bene is one of four Atlanta activist-residents who together intervened to stop judicial approval of the bonds. After the new ruling, Bene said that the intervenors plan an appeal.

Any other details about their planned legal arguments would come out in court documents.

But overall, Bene and allies have argued that the proposed public subsidies for Centennial Yards amount to a bad deal for taxpayers. They’ve argued that state and local governments will forego even more than the maximum $1.9 billion in taxes over decades that’s calculated by supporters.

And the plan’s boosters, including Atlanta Mayor Keisha Lance Bottoms, have long argued that there’s basically nothing going on in the Gulch now, it’s worth little or nothing to the tax base, so it’s a good deal to get a major development there.

McBurney wrote that the question of Council or the mayor’s policy wasn’t before his court, only the question of whether, as a matter of law, the procedures were followed for the issuance of a set of restated bonds and whether there’s adequate security for the payment of such bonds.

“The wisdom of building (and partially publicly financing) another downtown Atlanta live/work/play development is a question for a different branch of government,” McBurney wrote.

The pro and con sides are already scheduled for review by the Supreme Court of Georgia in February, in another one of three separate cases the intervenors filed. In that case, which speaks to backing a bond with sales taxes, McBurney also found that governments acted correctly.

The third case, also about property taxes, is still open in McBurney’s court.

A spokesman for The CIM group did not reply to an email seeking comment on what the protracted court fight might mean for the company’s development schedule. 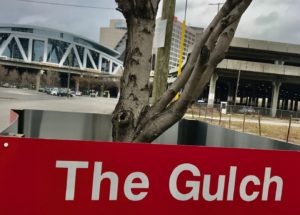 A parking lot that makes up part of the Gulch Downtown. Credit: Kelly Jordan

A divided Atlanta City Council voted in November 2018 to issue and modify bonds that would help pay for the construction of as much as 12 million feet of new office, retail and residential space in Downtown Atlanta.

The developer is California-based CIM Group, has released glitzy plans to turn the mostly-disused Gulch into a roughly 15-block Centennial Yards.

The money to pay off the bonds would come from future sales taxes and property taxes that would otherwise be due to the city, schools, county and state from inside the Gulch.