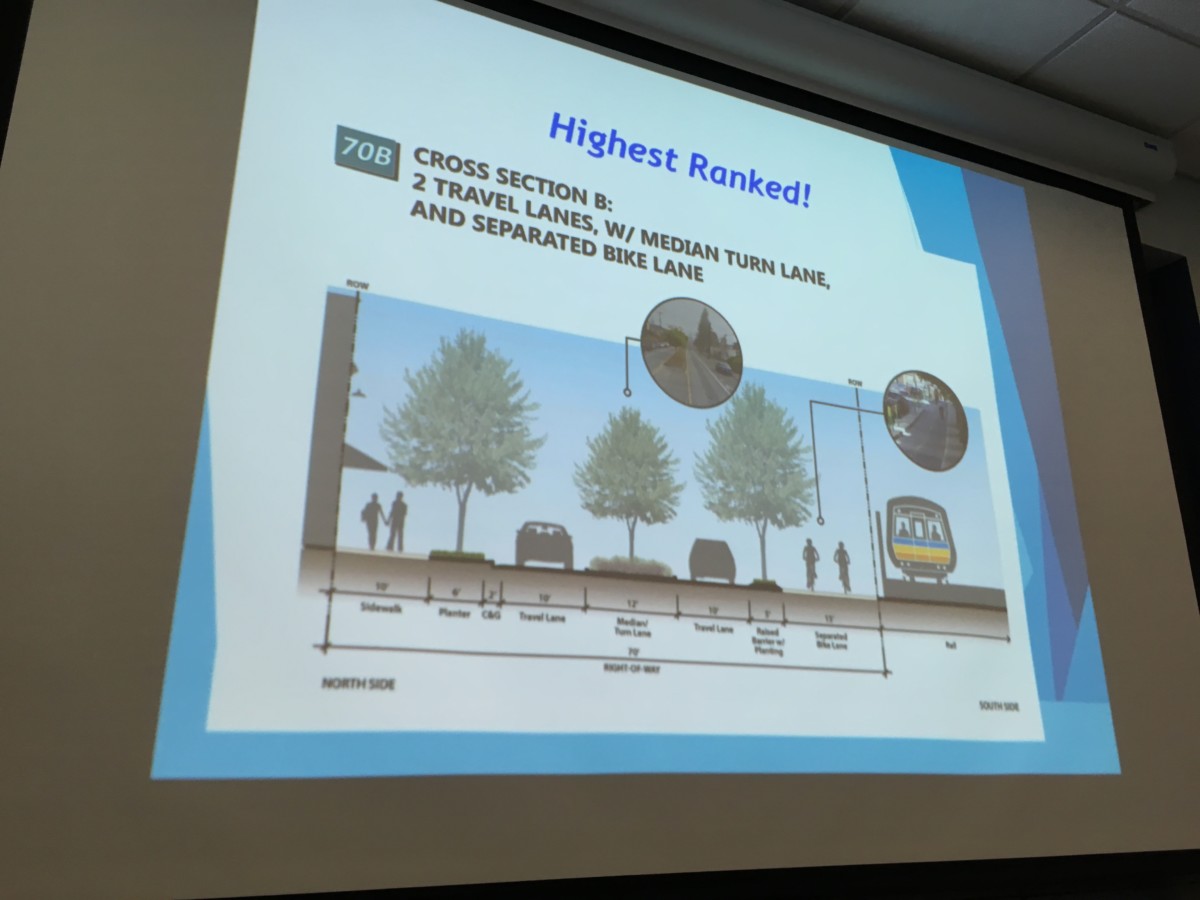 A city slide presented Wednesday shows a complete street sketch: space for cars, bikes, and pedestrians. Complete streets can vary in how they're laid out, but the point is that the roadway should be shared.

John and Andrea Morgan say cars race by their windows that overlook DeKalb Avenue — and they see a lot of crashes. A top city planner says that what they’re going to witness through those windows in the coming years is part of a departure from history for a car-centric city.

The idea is a so-called “complete street:” one that accommodates folks no matter whether they’re on foot, in a wheelchair, on two wheels, in a car or getting on the bus. So that means good sidewalks, crosswalks, bus stops, curb cuts and room for bikes. 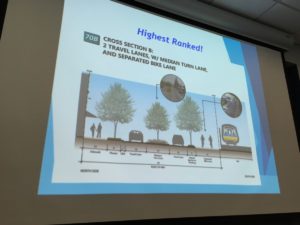 A city slide presented Wednesday shows a complete street sketch: space for cars, bikes, and pedestrians. Complete streets can vary in how they’re laid out, but the point is that the roadway should be shared.

And yes, the reversible lane will go, to be replaced with a managed turning lane — meaning marked places to turn left. That first phase of the plan also includes resurfacing the crater-pitted road and   timing the lights to move the most traffic. That phase of work is supposed to take eight months to one year.

The next phase includes the complete street works plus installation of internet fiber.

Losing a car lane will make driving a little slower — adding several seconds to each vehicle’s travel time per traffic light during rush hour, according to the city’s calculations. And planners do expect more drivers to head to other streets instead, raising rush hour volumes by something like one percent on Moreland Avenue in the morning to as much as 12 percent on McClendon in the evening. (Check out the entire presentation here.)

Several Atlanta arteries have already gotten the complete streets treatment, or are scheduled for it, like much of Martin Luther King Jr. Drive in west Atlanta.

But residents in some parts of the city have rejected complete streets because they don’t want to lose car capacity, notably on part of Peachtree Street and on part of MLK. And DeKalb Avenue is a thoroughfare for people who don’t necessarily live nearby, might not make it to public meetings, but rely on that road to get to work.

Andrea Morgan supports the work though, for safety reasons. She said her townhouse complex on DeKalb has a lot of kids, including her daughter — who can get to the street in just seconds. And there are those crashes. Sometimes cars hit the fence of their neighborhood.

“The reversible lane, people just don’t know what to do with it,” said Andrea Morgan. “Many, many times a day we see people using it the wrong way, getting in the reversible lane to turn when it’s not a turn lane.”

All completion is about two years away, said Faye DiMassimo, the general manager of Renew Atlanta, the name for a package of public works funded by a sales tax that city voters approved in 2015.

A lot of people are interested in what the city calls the DeKalb Avenue Complete Street Project. The works are divided among several projects covering about 4.4 miles. That’s from just east of the East Lake MARTA station, through Downtown where the road name changes to Decatur Street, ending at Peachtree Street.

On Wednesday night, a few hundred folks squeezed into a meeting room at the Martin Luther King Jr Natatorium. The weather was for perfect for children playing in the park just outside, but this crowd wanted to hang around inside to hear the city’s plan. 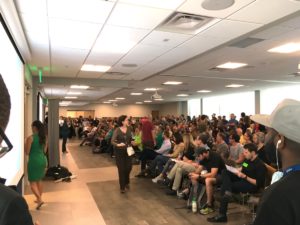 “It’s 1.4 miles for me to get to Moreland. It will take me 20 to 25 minutes to go 1.4 miles down my own street today,” he said. That’s even before the new anticipated traffic.

Jennifer Wilson said she’d like to have a safe option to get her son to daycare on DeKalb Avenue from her home on Clifton. She said her husband used to bike everywhere, but a toddler on a bike on DeKalb?

“Biking him up a heavy hill is really nerve-wracking in the morning with traffic, rush hour traffic,” she said, adding that even pushing a stroller doesn’t feel safe.

Meanwhile, some of the folks who have been watching this most closely for months are marking their calendars — they endorse the plan but want to make sure the city doesn’t stop after the fixing the lights and removing the reversible lane.

There’s no quote-unquote map of where and how bike lanes would run — that’s scheduled to be drawn up during phase 2. The intent is to have bike infrastructure all along the study corridor. But threading cars plus sidewalks and bikes between rail and built-up blocks is going to be a challenge.

Lauren Welsh has been a Candler Park neighborhood leader for years. But she said she’s concerned to see that the city is reporting that finding bike space will be challenging or difficult along parts of the corridor due in part to rights-of-way belonging to the railroad and others.

She doesn’t see why the right-of-way survey isn’t being done earlier. If it’s not done until after paving, “by then isn’t there the chance that it’s too late and we’ll miss the opportunity to get the whole phase 2 in?” Welsh said.

Public meetings about the works began in 2016. It has taken a while.

Complete streets are a different approach than what is historical to Atlanta, said DiMassimo. The city’s long been about one user, the car user.

There’s a sort of push-and-pull between those who are very dedicated to driving their cars and those who are users of other modes, she said.

“But nonetheless there are dedicated constituencies across both of those,” she said. “Resolving and coming to consensus on those bigger-picture conversations just takes more time.”