DeKalb County is taking steps to join Atlanta in restricting the location of small-box discount stores, such as Dollar Tree, that sell everyday items and food – except for fresh fruit and vegetables. 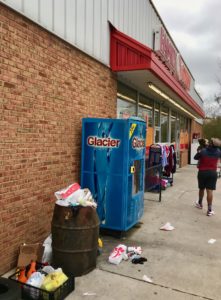 Some DeKalb County residents have told their elected officials that small-box retailers, such as this Family Dollar, make neighborhoods feel unkempt and downtrodden. Credit: Kelly Jordan

DeKalb already has commissioned a market study of the small-box shops in the county. A 180-day moratorium on new small-box shops was approved unanimously Jan. 28 by the county’s Board of Commissioners. The moratorium is to provide time for the study to be completed and considered in any future efforts to regulate these types of shops

The study is being conducted on DeKalb’s behalf by Dean Dabney, professor and chair of the Department of Criminal Justice and Criminology at Georgia State University’s Andrew Young School of Public Policy, commissioners said.

In Atlanta, small-box retailers are now restricted from locating within a mile of another such shop in most neighborhoods. The Atlanta City Council approved the measure Dec. 2, 2019.

Revenues at these chain discount shops have burgeoned since the Great Recession.

While media reports have focused on the closure of traditional retail stores, the expansion of these small-box retailers has gone largely unreported. Many of the stores have opened in lower-income and rural areas, where their presence can contribute to the closure of full-service grocery stores, according to a 2018 report by the Institute for Local Self Reliance.

Consider the growth of Dollar General Corp., with share values reported by wsj.com and third-quarter results reported by the company: 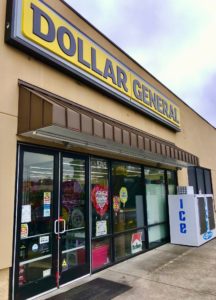 Share prices of Dollar General Corp. have doubled in the past three years and another sign of growth is the 4.6 increase in same store sales reported in late 2019, according to reports. Credit: Kelly Jordan

The stores have drawn local concerns for more than a year. Critics say the small-box shops have the effect of promoting food deserts, areas where it is difficult to buy fresh food and produce at affordable prices. In addition, some DeKalb residents say they make neighborhoods look shabby.

Though the small-box stores sell food, the products typically are canned or otherwise preserved. The lack of fresh produce limits the diet of residents in the neighborhood, who will patronize the shops rather than make a longer trek to a grocery store, according to the ILSR report. Poor nutrition is one result of a lack of fresh food and is a reason the Fulton Fresh Mobile Market delivers fresh food to food deserts in Fulton.

DeKalb Commissioner Lorraine Cochran-Johnson said at the meeting that the measure is not intended to impede the retail trade.

“I’m not against box stores,” she said. “But I’m against anything that’s a detriment to my community. 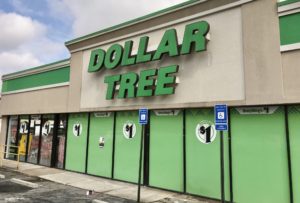 Cochran-Johnson’s remarks followed a series of remarks by DeKalb residents. Many of them said the quality of their neighborhoods are reduced by the presence of small-box retailers – which they associate with lower-income neighborhoods.

Holmes reached that conclusion after citing her review of small-box shops in her vicinity. Her observations include:

“We can do better,” Holmes said.

Decatur resident Juanita McCreary Holmes spoke against small-box retailers as longtime civic advocate John Evans waits to add his criticism to these shops, at the Jan. 28 meeting of DeKalb County’s board of commissioners. Credit: DeKalb County