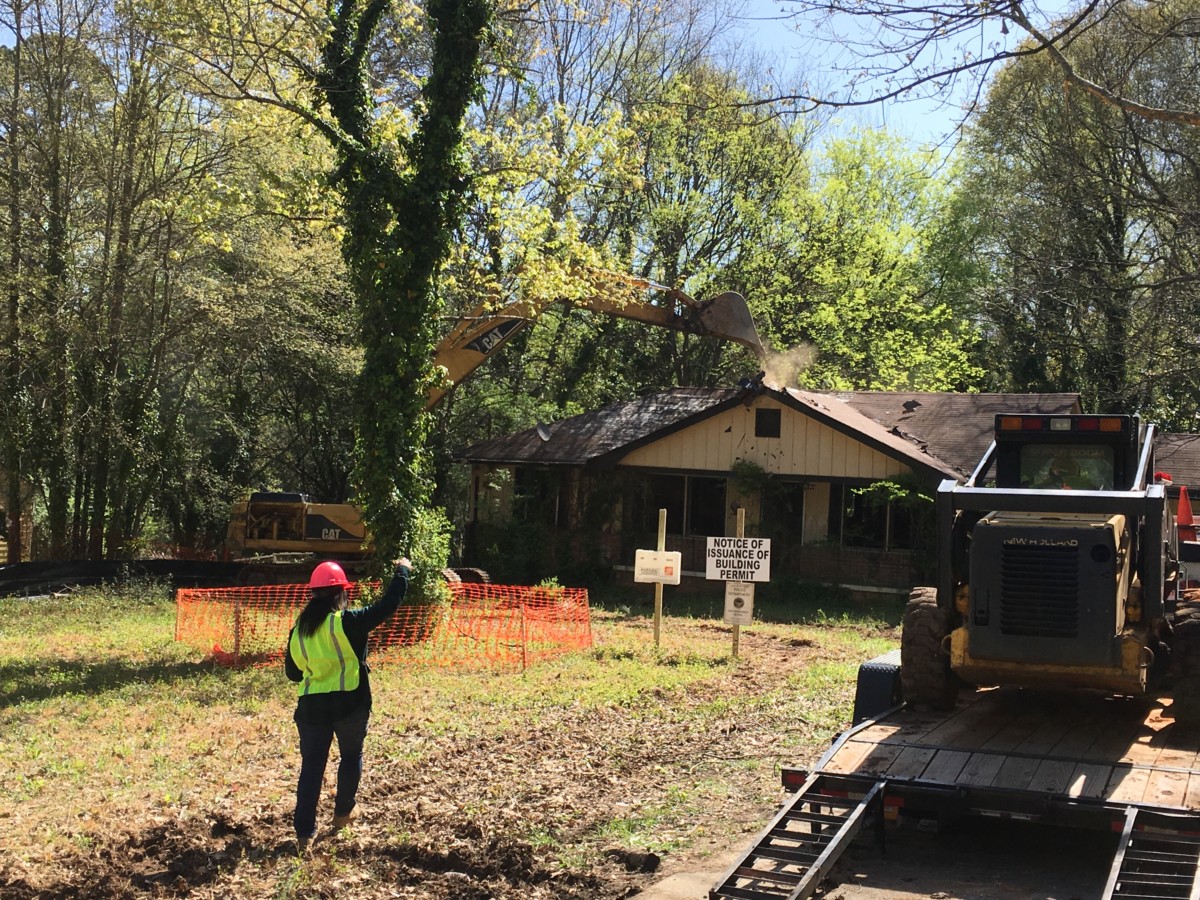 Demolition began Thursday on a Southwest Atlanta home that neighbors have been complaining about since 2015. Credit: Maggie Lee

When the sharp end of an excavator bit into the roof of an abandoned Southwest Atlanta home on Thursday, it was a crunch and crush years in the making. The city is working on tearing down such buildings. But it takes a while.

“This is the last resort,” said Atlanta Police Department Major Van Hobbs, commander of code enforcement. He was watching the removal of one very bad blot from a street of normal homes. A few handfuls of folks from the neighborhood and some elected leaders looked on at the hard-hatted workers as well: City Hall had put up balloons and laid out chairs and snacks for a little public ceremony to mark the occasion. 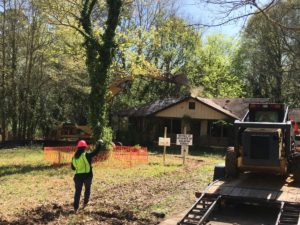 Demolition began Thursday on a Southwest Atlanta home that neighbors have been complaining about since 2015. Credit: Maggie Lee

When a complaint comes in about a building in bad shape, the city has to categorize it — is it a safety hazard? Does it have fire damage maybe? Is it in danger of collapse? Or is it just in need of some maintenance?

Hobbs said they then work on finding the owner and trying to get them to comply with code.

But sometimes, all they find is folks walking away from crumbling buildings or owners who have passed away — or some other unhappy circumstance that turns what was once a home into a ruin.

When that happens, it takes months of legal or administrative proceedings against the building, just to get a demolition order, subject to extra time and research about other things like asbestos hazards or possible protected historical significance.

The home coming down in Ben Hill Terrace was a ranch from 1955, according to tax records. The tax bill from last year valued it at $25,800. Court records show years of claims of unpaid tax and garbage bills.

Mayor Keisha Lance Bottoms visited that demolition and another on Thursday morning to kick off a “Fight the Blight” initiative.

“We just wanted to make sure that people are aware that if there is something that’s an eyesore in your community, if it’s not on the radar of City Hall already, please make sure that you bring it to our attention so that we can get it in line to be torn down,” Bottoms said.

The owner doesn’t necessarily get a free demolition of an eyesore. The city places a lien against the property owner for the cost of demolition. But generally there are some other lien holders in line first, like tax collectors. So, if the city does get made whole on demolition costs, that too may take a while.

“We’ve torn down over 100 houses in the last 15 months probably,” said Hobbs.

“The problem with that is Atlanta is so large – if I tear down 100 houses in 15 months, it’s a house here, a house here, it’s kind of like a shotgun approach. If I were to come into one community and tear down 100 properties then you would definitely see a difference. But unfortunately, this doesn’t work that way,” he said.

Atlanta City Councilwoman Marci Collier Overstreet represents the street that will soon be free of the abandoned, run-down home.

She said the city wants to make sure such properties don’t become a haven for criminal activity and aren’t an eyesore for neighbors.

“Demolitions really aren’t the answer for every blighted parcel in Atlanta, but it’s certainly the answer right here on this street today,” she said.

Previous Article
Northside commute worsened by closure of flex lanes on Ga. 400, north of I-285
Next Article
Georgia leads in addressing school climate