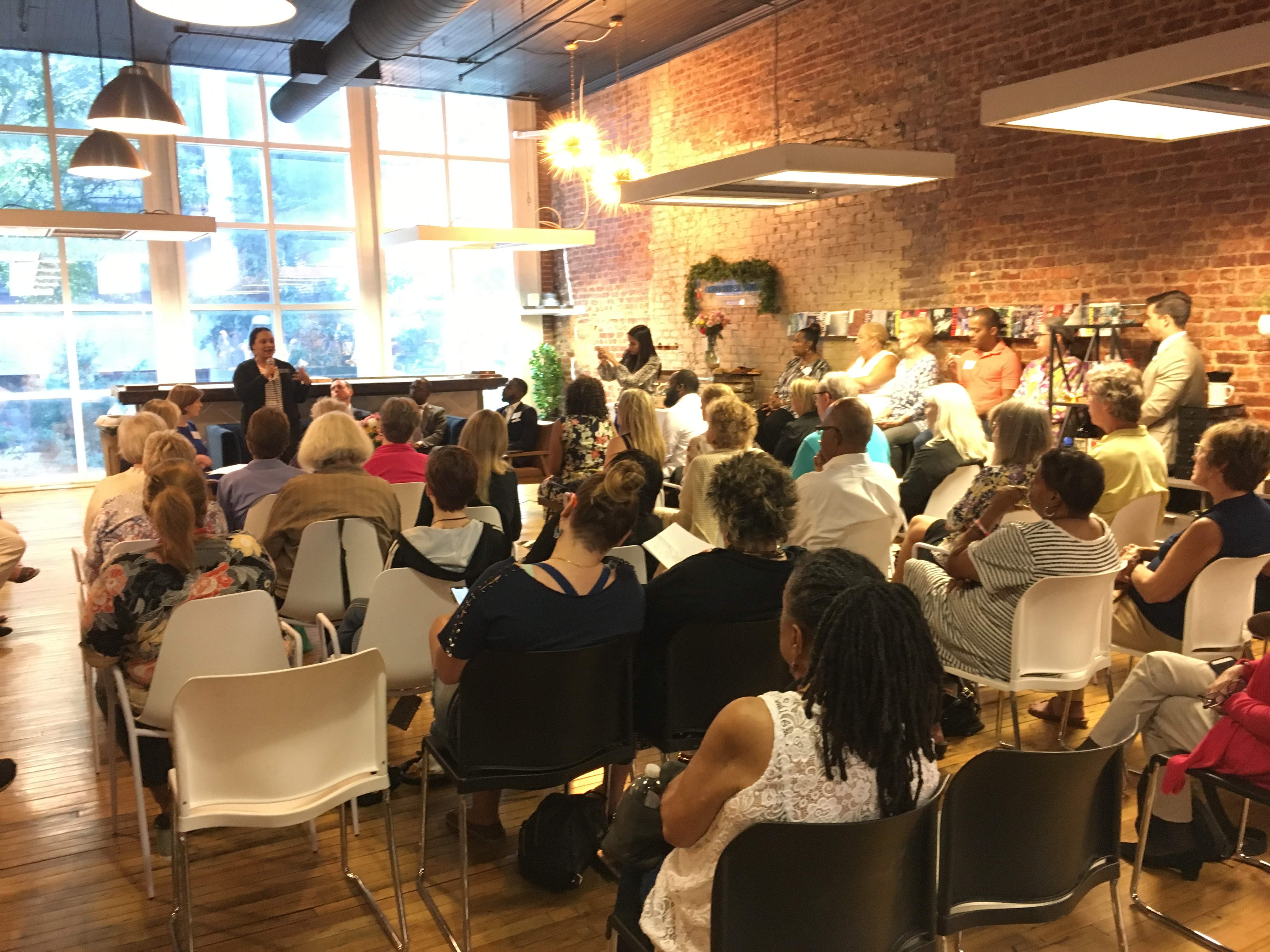 A lunchtime gathering of Democratic Party of Georgia leaders and grassroots supporters in Atlanta on Sept. 4. The agenda: the electoral lessons of 2018. Credit: Maggie Lee

A number that’s on every Georgia Democratic state strategist’s mind is about 55,000: that was the state’s tally of  Republican Brian Kemp’s victory over Democrat Stacey Abrams in the 2018 gubernatorial election.

With almost 4 million votes cast, Team Abrams in 2018 demonstrated how many Georgia voters can turn up to vote Democrat, for the right candidate with the right ground game.

And the state party is taking some things away from that example. 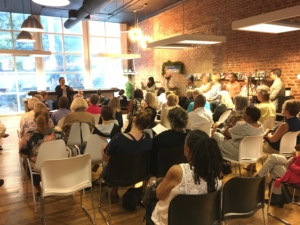 A lunchtime gathering of Democratic Party of Georgia leaders and grassroots supporters in Atlanta on Sept. 4. The agenda: the electoral lessons of 2018. Credit: Maggie Lee

In a sunny office Downtown last week, the Democratic Party of Georgia displayed to a gathering of grassroots activists a kind of energy about get-out-the-vote efforts that’s been absent in years past. Now to be fair, there might not have been much Dems could have done in the deep red Georgia of 10 years ago. But things are different now.

Nikema Williams, who’s both a state senator from Atlanta and the state party chair, said she spent Election Day 2018 fielding calls from a voter protection hotline.

“We have the first full-time voter protection director of any state party in the country,” Williams said.

“We’re investing our resources, we’re investing in the expertise, we’re making sure that we get candidates out that are going to stand up for our right to vote. We’re talking about these issues, it’s not just something that happens on Election Day,” she said. “Democracy doesn’t start and stop on Election Day.”

The party is trying to get a certified chapter going in every Georgia county. They’re going to be pushing out voter education material and asking the grassroots leaders to share widely in their networks, including social media.

That hotline that Democrats were staffing on Election Day is still operational now. Heck, it was a new feature to even have a hotline and to have all the candidates publicize it.

Democrats have long and still do blame voter suppression for Abrams’ loss. That’s going to be a theme in campaigning and on policy platforms.

Georgia’s voting system can seem very, very disappointing in a world where the click of a few buttons on a phone brings an accurate list of restaurants, hours and menus anywhere in the country.

But voting? Well, in Georgia there are 159 ways to announce how that’s done, and how you can submit a correct provisional ballot — one per Georgia county. The county might — or might not — post an up-to-date schedule on its website. And voting certainly isn’t going to come up on Google Maps. You might have to wait in line much longer than you do in Walmart. The computers you use when you get there are more 15 years old. And, pretty much, your paperwork needs to have been done about a month in advance.

But the flip side is part budgetary — new voting systems or machines cost money (though the state just signed a contract for new ones.) Keeping polls open longer costs money. Doing a public campaign to encourage people to get out and vote costs money.

But about 6,500 calls to the Dems’ hotline were serious and puzzling enough to the party that the party is now circling back, trying to help those folks figure out what went wrong.

The biggest tranche was voter registration problems, specifically, people registered at the wrong address in some way — including people who had moved and not updated an address, or just for some unclear reason had some kind of address mismatch. Another big tranche of the problems were long lines to vote in some places.

Dreyer said one easy thing to do would be to let people vote at any precinct in their county on Election Day. Right now, on Election Day, you have to go to your assigned polling place.

In some states, you can go to any precinct in your county — the one closest to your job, your bus stop, your kid’s daycare or where ever you’re going.

But Dreyer said Georgia needs to think even bigger than that, and noted that some states have same-day voter registration.

And one more thing, expect Democrat-led campaigns about “gerrymandering.”

That means redrawing districts in an unfair way to give one party an advantage. After the 2020 U.S. Census, the state Legislature will be in charge of a redraw of everything from congressional districts to city councils.

The National Democratic Redistricting Committee is targeting 12 states in 2019-2020 in an effort to get what they characterize as fair redistricting.  Among the targets is Georgia. There’s a different strategy in every state, said NDRC’s Georgia director, Theron Johnson. In North Carolina, it’s been litigation. In Georgia, it’s an electoral and advocacy route.

The idea, he said, is to show voters how there’s a line between them and the issues that are important to them.

Democrats fear that if the GOP is still in charge of the state House and the state Senate, the result will be a map that fortifies the GOP.

That’s why the number 16 is on Democrat minds too: that’s number of state House seats they would need to flip in 2020 to take over the state House. Flipping that many seats in 2020 would give them a seat at the table where maps will be drawn, just in time to influence a process that will help outline the paths to power for the following decade.