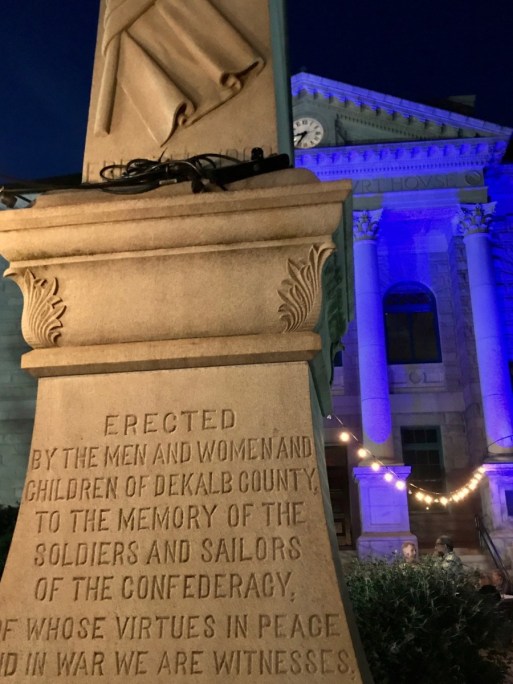 The Confederate marker in downtown Decatur that no one wants, but that the county can't remove. Credit: Kelly Jordan

Two Georgia state Senators with very different thoughts — and bills — on monuments on public land got a hearing in the Capitol Thursday. Confederate monuments dominated the hearing. 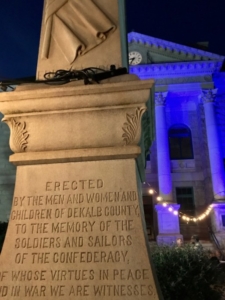 The Confederate marker in downtown Decatur that no one wants, but that the county can’t remove. Credit: Kelly Jordan

DeKalb County’s got a situation: it wants to get rid of the massive Confederate monument that it owns in downtown Decatur.

“After the terroristic events in Charlottesville, Virginia, citizens petitioned for the removal of the monument as a symbol of white supremacy inappropriate for maintenance by a government elected to represent them,” DeKalb County Commissioner and Presiding Officer Jeff Rader told a panel of state Senators on Thursday.

Under state law, DeKalb can’t just take down the monument. The county must find some other place to display the 30-foot-tall obelisk, which was put up in 1908.

But nobody wants it.

Not even the Stone Mountain Memorial Association, Rader said.

That’s why he came to speak in favor of Senate Bill 51, by state Sen. Elena Parent, D-Atlanta.

Her bill would give local governments the power to remove such memorials.

“This [Decatur] monument is … the most prominent thing in the middle of this community,” Parent said. “For members of my county, they would rather honor something else at the present time.”

But on the other side, Chickamauga Republican state Sen. Jeff Mullis says he doesn’t want any monuments removed. His new Senate Bill 77 adds to Georgia’s protections for monuments.  Right now, it’s up to a judge to decide on damages that any person or entity would have to pay for vandalizing, destroying or purposely “losing” a monument. Mullis’ bill would set damages at three times the cost of repair or replacement of such a monument.

His bill doesn’t single out Confederate monuments. It extends protections to all monuments, no matter the war, or “religious, civil, political, social, or cultural events” commemorated.

Mullis said he believes Georgia’s strength is in its diversity, and that it needs to respect and preserve its history, good, bad or indifferent.

“We just need to add new [monuments], not take away old ones,” Mullis said Thursday.

Martin O’Toole, a lawyer and spokesman for the Georgia Division of the Sons of Confederate Veterans spoke in favor of Mullis’ bill, saying that monuments of all kinds are being defaced.

“The importance here is for the deterrent effect,” said O’Toole.

But it’s not clear whether the state Senate Committee on Government Oversight wants to get into the issue one way or the other. The committee took no action on either bill.

Keeping an eye on Atlantans