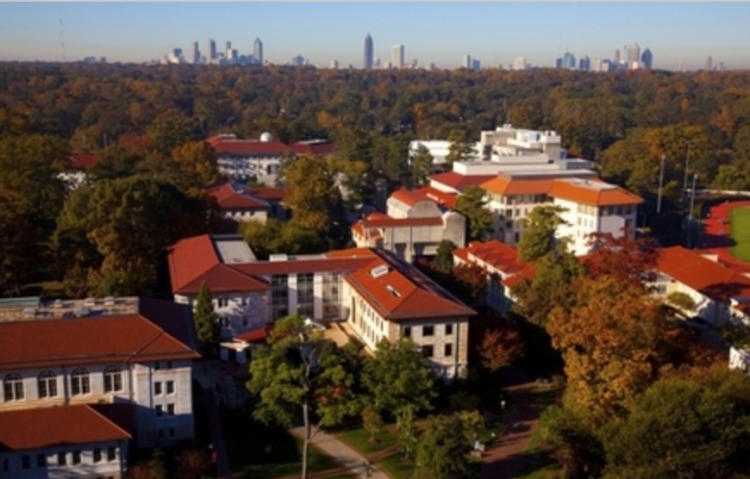 A skyline could be developed at and around Emory University under terms of a rezoning proposal pending before the Atlanta City Council. Credit: usnews.com

Office towers of an unlimited height could be permitted on a portion of land brought into Atlanta through the annexation of Emory University and the surrounding area, according to the rezoning proposal. 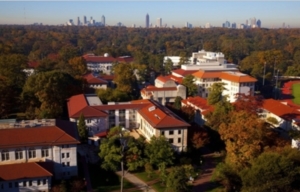 Atlanta is able to rezone the annexed property because part of its agreement with DeKalb County has expired. Atlanta had agreed not to seek to rezone any of the 744 acres, without DeKalb’s approval, for one year after the annexation took effect Jan. 1, 2018, according to terms of the deal.

The city’s Zoning Review Board is slated to consider the proposal at its March 24 meeting. The proposal was on the agenda of the relevant Neighborhood Planning Unit, F, at its Feb. 18 meeting. Atlanta City Councilmember Jennifer Ide presented the proposal at the council’s Feb. 4 meeting.

Atlanta plans to add the zoning category for an Office Institutional District. The city’s code defines the maximum height limit in an O-I District as:

The section that’s referenced restricts the height allowed in an O-I District in areas where the district adjoins a residential district without an intervening street, according to the city’s code.

The proposal as available on the city’s website doesn’t indicate if the proposed O-I District abuts a residential district. The proposal doesn’t include a map or any additional locating information.

The land that was annexed currently does have a zoning category for an O-I Conditional. Conditions sometimes involve the location of a parking structure or setback from a property line. Conditions sometimes are devised on a case-by-case basis during discussions between a government’s planners and the owner or developer. 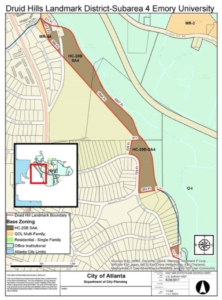 This portion of the Druid Hills area does not appear to be affected by the proposed rezoning of portions of the 744 acres Atlanta annexed in 2017, effective Jan. 1. 2018. Credit: Atlanta

In addition, the rezoning proposal appears to ease restrictions on the development of houses in the area to be rezoned.

The rezoning proposal calls for an existing R-3-Conditional category to be eliminated; conditions that aren’t defined in the legislation.

The proposal calls for the existing R-4-Conditional category to continue. The legislation proposes to add an R-4 category, one without conditions.

The proposal does not appear to affect the existing protections from development provided by the Druid Hills Landmark Historic District Subarea 4.

Terms of the annexation state specifically that DeKalb County did not relinquish its interest in preserving the historic district:

Atlanta described the protections history of the district and protections provided in a 2017 report created for the city’s Urban Design Commission in support of a request to designate Subarea 4, in addition to three existing subareas:

The property Atlanta annexed is owned by Emory University, Children’s Healthcare of Atlanta, The Centers for Disease Control, Georgia Power Company, Villa International, and the Synod of South Atlantic & Presbyterian Church, according to the city’s legislation.