The co-editor of a new book intended to showcase “undocumented scholars doing kick-ass theoretical and empirical work” is to explore this new thread in the national discussion of immigration in a Jan. 25 webinar hosted by Emory University. 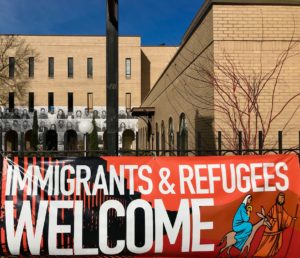 The familiar images of Jesus, Joseph and Mary send a specific message from this temporary mural in Downtown Atlanta. Credit: Kelly Jordan

The timing coincides with the start of President Biden’s immigration reform program. Biden issued executive orders on his first day in office, Wednesday, that strengthen the position of undocumented residents in the country.

While Biden’s work has immediate consequences for the 300,000 undocumented immigrants in metro Atlanta, according to a 2017 estimate by Pew, the emerging scholarly research illuminates other realities of everyday life for those living under the threat of deportation of themselves, relatives and friends.

UCLA Professor Leisy Abrego is to lead the hour-long program hosted on Zoom by Emory University’s James Weldon Johnson Institute for the Study of Race and Difference. There is no fee to attend. The hourlong event is to begin at noon.

The emerging theory Abrego is to discuss starts with the concept of DREAMers as high achievers who are being punished for their parents’ decision to bring them into the country illegally. Politicians, the media and advocates shaped this mythology to promote immigration reform under the Obama administration. 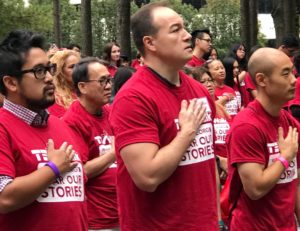 Participants in a pre-pandemic TEA walk pause to recite the Pledge of Allegiance to the American flag. Credit: Kelly Jordan

However, this view overlooks the sometimes gritty reality of life for those who aren’t living a storybook American life – such as those whose sexual orientation means their undocumented status may not be their most important identity, according to the book’s introduction.

After figuring out a general framework for their book, Abrego and her co-editor, Genevieve Negrón-Gonzales, set off on what proved to be a groundbreaking effort to capture the voices of rising activists and scholars. The result was a “kick ass” collection of works by this 1.5 generation, according to an interview posted by myundocumentedlife.org that was referenced by the book’s publisher, Duke University Press.

In the interview, Abrego and Negrón-Gonzales offer this insight into what they hope readers take away from the book, We Are Not Dreamers: Undocumented Scholars Theorize Undocumented Life in the United States: 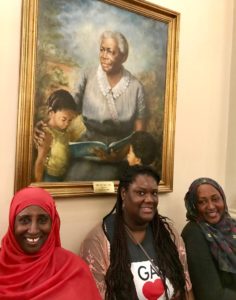 During a pre-pandemic visit to the state Capitol, immigrants pause for a photo beneath the portrait of Lucy Craft Laney, an educator who founded the first school for Black students in Augusta. Credit: Kelly Jordan

Abrego is a leading immigration scholar who draws on her experience in the first wave of Salvadoran immigrants to the U.S., in the 1980s. Abrego is a professor in Chicana/o Studies at UCLA.

Negrón-Gonzales, of the University of San Francisco, grew up near the Mexican border in California. At age 16, Negrón-Gonzales joined the movement to block Proposition 187, a ballot measure to deny undocumented immigrants access to public services. Voters approved the measure and, in response, Negrón-Gonzales said she’s focused her research on building an equitable society, according to her USFCA profile.

Note to readers: The Zoom webinar led by Leisy Abrego is open to the public at no charge and is hosted by Emory University’s James Weldon Johnson Institute for the Study of Race and Difference, Jan. 25 from noon to 1 p.m. The book, “We Are Not Dreamers,” is available from Duke University Press. 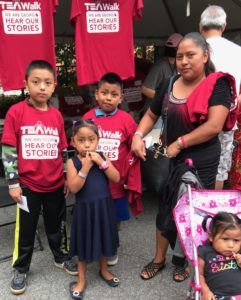 Youngsters in this family of immigrants wear the TEA walk T shirts at a pre-pandemic event. Credit: Kelly Jordan