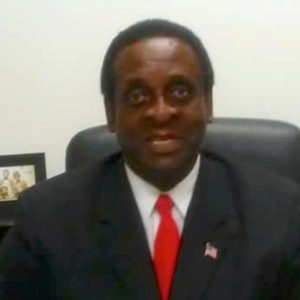 Some answers have been slightly condensed for clarity.

A: My No. 1 concern for District 4 is economic development and fighting gentrification; public safety and helping education.

Q: What could you as a commissioner do about those concerns, what are some of your policy ideas?

A: One of the things — keep in mind the commission district that I am running in, District 4 is completely inside the city limits of Atlanta. … Saying that, part of it is some of the most hardcore depressed areas in Atlanta, in the inner city. One of the biggest problems we’re having is with affordable housing; we got food deserts and we got serious health disparities.

One thing that I do plan on doing is really trying to encourage or set a policy that the Fulton Health and Wellness Department really get into the community so we can catch some of the problems before they get out of hand health-wise.

Because what happens when people don’t take care of their health early on, it becomes an emergency and they end up at Grady Hospital and we end up paying for it anyway.

I’m also concerned about at the real high rate of incarceration of people for petty crimes. A lot of the crime is due to mental illness. We have a lot of veterans who are having problems. I think we should have a real strong mental health component as opposed to incarceration.

Q: In Fulton County, a lot of public services are handled by the cities … what do you see as the role of the county government and of the commission?

A: One thing that I would seriously consider … I think Fulton County is too big. I would not be opposed to going back and revisiting that we should split. You go from north Fulton to south Fulton, there’s no commonality. And I’m not talking about race. I know that’s hard in Atlanta to even talk about. But I think the delivery of services could be better if we really consider that possibility. I would be willing to put that before a vote of the people to decide whether they want to split Fulton County up so we can really deliver services in a more equitable way to all the citizens.

A: One thing is that it was pretty much scandal-free. I think they really did a good job of improving services to senior citizens And actually I think the municipalization of the county, I think was a good thing.

People couldn’t care less who delivers service to them, they just want good service delivery. So if we can get the personalities out of it … how do you really deliver services? That’s what people  really want.

Q: On the other side of the coin, in the last 10 years, what’s something the Fulton County government has either gotten wrong or failed to do?

A: I really think that Fulton County has not pushed strong enough to get state funding for Grady Hospital or state involvement with transportation issues such as MARTA. If that could improve, that would improve the lives of a lot of our citizens metrowide. We have not been forceful enough on those two things.

A: I am not running to replace the late commissioner Joan P. Garner. I’m running to fill her unexpired term.

I will say if you look at my record of public service, from the time I was on the [East Point] City Council, a community activist, working in media, one thing people give me credit for, that is ability to listen well and to really get things done. It’s not done about getting credit for anything it’s about getting things done for the people. Where I’m working now, at the Fulton-Atlanta Community Action Authority, we do that every day. I work in the trenches of really trying to help the least of Fulton County residents, basic things of trying to make ends meet, like paying their utility bill, paying their rent. That’s something I do every day as a field organizer for the Fulton Atlanta Community Action Authority. I’ll parlay that into public policy.

What I … try to tell people … is that: being an elected official, whether it’s city council or county commission, you can’t make everything happen. But I want to make policies where good jobs can be created. I want to make it possible for people to stay in their homes in Atlanta and in Fulton County without being gentrified out, that’s the kind of thing I would do as a county commissioner. If I don’t know something, I will let people know it and try to get the best information before i vote on a policy that will affect people.

Back to Fulton County Commission District 4 candidate Q & As