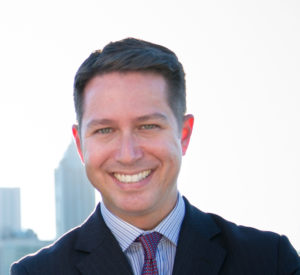 A: The inability of our local government to meaningfully address the lack of affordable housing is one of our government’s greatest moral failings. In recent years, property taxes and rents have skyrocketed and as a result families, seniors and low-income earners have been displaced at alarming rates. In communities such as Old Fourth Ward, it is completely unrecognizable from what it was five years ago and we should be greatly concerned that other neighborhoods are in danger of a similar fate.

Additionally, with all of the new construction in Atlanta and around the region, there are little to no affordable housing units currently being built. The average rent for a one-bedroom apartment in Atlanta is more than $1,200 per month. That is unsustainable for many residents given the fact that wage growth has not kept up with rent rates.

Q: What could you, as a commissioner, do about that, what are some policy ideas?

A: To start, we need to fix our broken property tax system and build thousands of new affordable housing units. We need more workforce housing for teachers, police officers, firefighters, young people just starting out in life, and protections for our seniors so that they can age in place.

I believe that Fulton County, the city of Atlanta, other cities inside Fulton County, and agencies such as Atlanta Housing Authority and the Fulton County/City of Atlanta Land Bank Authority need to enter into an intergovernmental agreement so that we can tackle this challenge together across the entire county. As part of this IGA, I will champion the implementation of the Low Income Rental and Ownership Stabilization Board so that we can explore ways to maintain the integrity of a neighborhood and help residents stay where they want to live.

For all new developments and neighborhood stabilization projects, there must be open and transparent community engagement with legally binding community benefits agreements. East Lake and the new Grove Park project are good examples to consider.

Additionally, Fulton County should look carefully at what property inventory is in the land bank and work with developers directly to construct new affordable housing units and transit-oriented development along the Atlanta BeltLine, MARTA and other transit corridors.

For homeowners, property tax assessments play a vital role in bringing affordable housing under control. Fulton County has kicked the can down the road long enough and last year’s assessment was an abysmal failure. The County attempted to pass off their own financial mismanagement and shortcomings to property owners with a massive spike in taxes. It’s shameful how Fulton County treated its residents. And then its sudden reversal left the county budget and the Atlanta Public Schools’ finances in jeopardy. We need to ensure this does not happen again.

As the next Fulton County Commissioner, I’ll ensure we have accurate and fair tax assessments, put a cap on the increase homeowners can get in one year and work to freeze property taxes for seniors and low-income residents. We need to lead with heart and allow and encourage seniors to age in place so they don’t get priced out of their neighborhoods because of rising property taxes.[iframe width=”400″ height=”300″ scrolling=”no” frameborder=”no” align=”right” src=”https://fusiontables.google.com/embedviz?q=select+col108+from+1_vwkapmXkBpyVvw1KpQooPawUg27gh863GUEw4OZ&viz=MAP&h=false&lat=33.752815100892285&lng=-84.44312322998043&t=1&z=11&l=col108&y=2&tmplt=2&hml=KML”]

Q: In Fulton County, a lot of public services are handled by the cities. What do you see as the role of the county government and of the Commission?

A: Despite Fulton County being largely municipalized with the exception of public services in the newly established city of South Fulton, the county still has many critical functions. Fulton County’s primary functions of government include the criminal justice system with the courts and the county jail, the Board of Tax Assessors and the Tax Commissioner’s Office, the Board of Elections, Animal Control, the library system and the Department of Public Health to name a few. The role of county government and of the Commission is to ensure that these critical functions are working for our residents in a fair, equitable and ethical manner.

Fulton County has gotten quite a bit right over the last 10 years. Most recently, the Commission voted unanimously to provide $60 million in funding for Grady Hospital’s much needed expansion plans. This was a resounding triumph for both Fulton County and Grady Hospital as it wasn’t that long ago that Grady was on life support and in jeopardy of closing its doors altogether. I believe we need to go further and have a dedicated and recession-proof funding stream for Grady so that it can meet future challenges and uncertainties.

Q: Now let’s talk about the other side of the coin: in the last 10 years, what’s something the Fulton County government has gotten wrong or failed to do?

For many years, Fulton County has been unwilling or unable to accurately and fairly assess property tax values. With little to no oversight or input from the Commission, the Board of Tax Assessors issued homeowners with an increase of an average of 20 percent and in some cases, as much as 300 percent. Thankfully, the Commission acted and froze property taxes to its earlier 2016 levels, but that unfortunately left a gaping hole in the budgets for county operations and Atlanta Public Schools. In short, it was a debacle and we need to ensure that something like this doesn’t happen again.

A: For nearly eight years, I have had the distinct privilege and honor of working for the residents of the city of Atlanta as a senior member of the Reed Administration. I have been on the front lines of serving our citizens. I’m running for Fulton County Commission because I want to continue working for our residents, improve county services for all of our communities and ensure that your government is ethical, responsive and financially sound.

While working for city government, we have had balanced budgets every year; historically low crime rates; improved public transit options with increased funding for MARTA, the expansion of the Atlanta BeltLine and new bike lane networks; low unemployment; and sweeping pension reform that helped the city’s reserves grow from just $7.4 million to more than $175 million today. My work with the City of Atlanta on these issues helped bring about real change for communities and neighborhoods in Atlanta. I want to take what I’ve learned at the city and bring fresh thinking and new leadership to Fulton County government.

In recent years, we have taken great strides toward fairness, justice and opportunity for all of our residents, but I believe there’s more to do. As the next Fulton County Commissioner, I will build more affordable housing and fix our broken property tax system; fight for our diverse communities and seniors across the county; increase funding for public health outreach and Grady Hospital; focus on drastically reducing the rising HIV infection rates; and push for statewide investment in MARTA and expand our transit options.

Back to Fulton County Commission District 4 candidate Q & As