Fulton County and all the cities in it could fall off their own fiscal cliff on Thursday. Atlanta could lose tax revenues that pay for 19 percent of its current year budget. 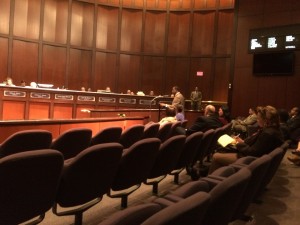 Atlanta Mayor Kasim Reed told the Atlanta City Council in a special session Wednesday evening that the future is uncertain for a major source of sales tax revenues shared by Fulton County and all its cities. Unless Atlanta signs an existing distribution agreement for the 1 percent local option sales tax, Fulton may not be able to continue to levy the tax, Reed said.

The urgency is arising because Atlanta’s lawyers evidently were unprepared for a ruling last week from the Georgia Supreme Court. In a case out of Turner County, in south Georgia, justices tossed out an arbitration process concerning LOST distribution formulas that Atlanta intended to use to seek a bigger bite of LOST revenues.

In an arbitration hearing scheduled for Nov. 11, Atlanta’s lawyers had intended to argue that Atlanta deserves a bigger bite of the tax than it was provided in a deal signed last month by Fulton County and 12 of the county’s 14 cities, Reed said. This hearing was made moot by the court ruling, Reed said. Now the original deal is unsigned by the largest city in the county, and the fate of the LOST is uncertain, according to the mayor.

LOST is one of several sales taxes collected in Fulton County and Atlanta to provide services. LOST generates about $240 million a year. Other sales taxes include a countywide sales tax to pay for school projects and a tax collected only in Atlanta to pay for upgrades to the water and sewer systems.

To summarize a description of LOST, as provided by the Georgia Municipal Association:

The Georgia Supreme Court’s ruling threw out a provision of a 2012 law that authorized courts to determine the formula, according to Reed.

Consequently, Atlanta now is at the 11th hour to sign an existing distribution agreement for the LOST revenues, or risk having the LOST discontinued in Fulton County and all municipalities, Reed said.

“We don’t know what’s going to happen because we’re in uncharted waters,” Reed said. “Nobody’s been here before. If we don’t sign, all of the cities and the county will be out of luck.”

An advisory opinion from Georgia Attorney General Sam Olens sets a deadline of Thursday for all distribution certificates to be submitted to the state, Reed said.

Reed told the council the city collects from $94 million to $100 million from the LOST. The council voted to authorize the mayor to sign the distribution formula Thursday, which is what the mayor asked the council to do. Councilmember Yolanda Adrean tried to keep the council actively involved in the decision over whether to sign the agreement, but was unsuccessful.