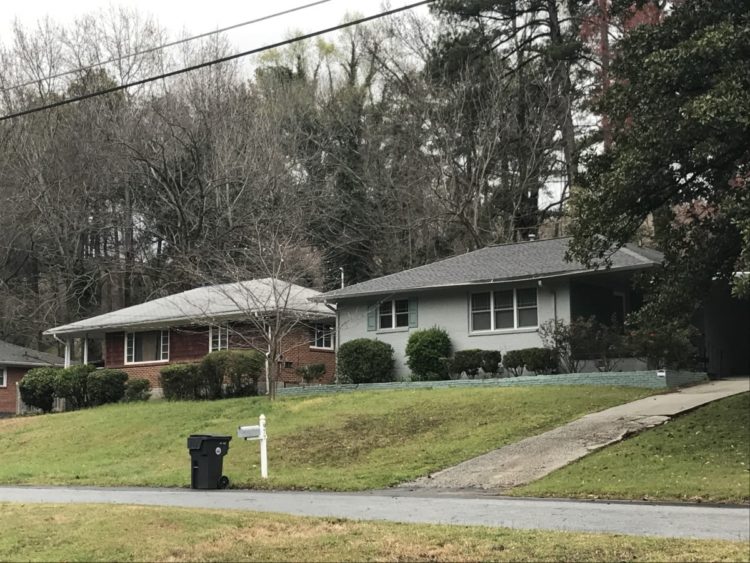 The Jefferson Park neighborhood near Atlanta's airport has the highest eviction rate in Fulton County, according to a new report from the Federal Reserve of Atlanta. Credit: David Pendered

Fulton County leads the nation in the rate of home renters who are evicted or put on notice of eviction, according to a new report from the Federal Reserve Bank in Atlanta. A contributing factor is the management practices of corporations and equity funds that bought homes during the Great Recession. 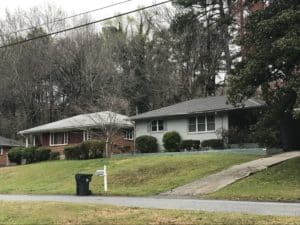 The Jefferson Park neighborhood near Atlanta’s airport has the highest eviction rate in Fulton County, according to a new report from the Federal Reserve of Atlanta. Credit: David Pendered

These figures compare to a rate of 11 percent of renters in Cleveland receiving an eviction notice, and 7 percent in Chicago, according to the report.

The question of who owns the rental homes is not an historic issue in the U.S. Most rental homes have been owned by mom-and-pop companies. These companies typically run fewer than 15 rental homes and tend to have personal relations with their tenants.

The script flipped during the Great Recession.

Corporations and hedge funds swooped in to make bulk purchases of foreclosed properties that were bundled by banks, according to Elora Raymond, the lead author of the Fed’s report, Corporate Landlords, Institutional Investors, and Displacement: Eviction Rates in Single- Family Rentals.

“We’re in a period where more and more households are renting, and new players are entering the market and becoming our new landlords,” Raymond during her presentation Tuesday to the Atlanta Regional Housing Forum. 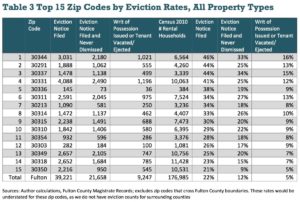 One purpose of the study was to spot trends among the investors who have bought homes in Fulton County. Raymond said the report is the first formal study of eviction rates in Atlanta and Fulton County.

The research determined that corporate landlords were 8 percent more likely to file eviction notices in 2015 in Fulton County than were mom-and-pop landlords.

Raymond said specifically that she would not identify the landlords who did, or didn’t, hurry to file eviction notices.

That said, a sense of the extent of corporate-owned rental housing in the region can be gained from a report in 2013 by bloomberg.com. The story observed that metro Atlanta was one of the regions targeted by Blackstone Group. At the time, Blackstone was a major buyer of foreclosed houses across the country. 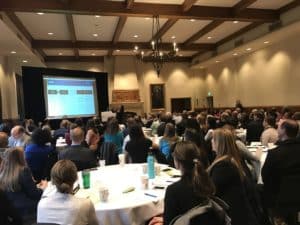 A few sentences from Blackstone’s latest annual report speak to the company’s views about its real estate holdings. The report filed Feb. 24 with the Securities and Exchange Commission states:

Although not cited in Blackstone’s filing, any regulatory changes in eviction laws would be a risk factor because of their potential impact on revenues.

Raymond said Georgia is viewed as a pro landlord state, largely because the tenant/landlord relation is lightly regulated. Georgia has seven tenant laws, compared to a national average of 15 tenant laws in each state. 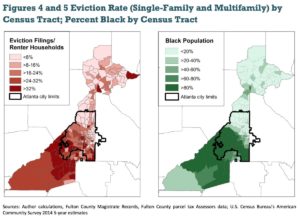 Eviction laws are one subject that housing advocates should prod state lawmakers to consider, according to William McFarland, a longtime advocate of affordable housing and community development.

“Whether its eviction laws or IZ [inclusionary zoning], or if we can’t freeze property taxes for seniors – those are all state policy issues,” McFarland said. “Advocates and the city [of Atlanta] need to work harder at the state level.”

These are the sorts of issues Raymond had highlighted. Decisions by landlords have major impacts on the future quality of life of ejected tenants. The dislocations and relocations cause a lot of physical and mental stress and disrupt the education of school-age children as they move from school to school to school. The turnover rate in Atlanta Public Schools is 30 percent, she said.

“Landlords have a lot of discretion,” Raymond said. “Eviction rates we’re seeing in Atlanta are impacting their ability to rent in the city. That’s one reason they end up in homelessness after moving. [After eviction], they move to a worse neighborhood and a worse apartment. In a year they get it together, and they move again.”