The $1.2 billion Georgia intends to inject into the state’s economy through its long-term investment program is expected to help offset the pandemic-related recession that has cut jobs and hampered company earnings across the state. 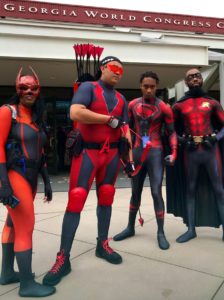 MomoCon 2018, a celebration of anime and games, attracted more than 35,000 visitors to the Georgia World Congress Center and Omni Hotel Atlanta, fulfilling a GWCC mission to serve as a destination for conventions. Credit: Kelly Jordan

This is far from an average year for the state’s capital program, which is funded by borrowing. The capital budget of Georgia and other states has taken on national significance during the economic recession caused by governments’ decisions to shut down the economy, and with it jobs, personal income and taxes.

Georgia ranked 27th in the country in terms of state debt per person. On the downside, it ranked 10th in the country in debt as a percentage of general spending, according to a report by S&P Global based on figures for 2019, the latest national figures available. Georgia’s Aaa credit ranking that was issued May 28 by Moody’s Investors Service is the agency’s highest, and the rating action cites Georgia’s low debt and pension obligations, plus fiscal management and governance.

Some economists are focused infrastructure construction as a way to soften economic hardships, especially if the pandemic lingers and continues to impact budgets. Attention has tended to focus on federal infrastructure spending, because of the magnitude. State spending also is significant on projects that encompass public facilities such as roads, schools and convention centers.

This attention stems from the impact infrastructure spending has on states’ economies. Each dollar spent on infrastructure was found to have increased the gross state product by at least $2, according to a report by the San Francisco Federal Reserve.

The multiplier effect spurs job creation along the entire stream of a project. Public works projects mean jobs for lawyers, engineers, financial servicers and others who assemble a project; those who produce and transport materials such as rebar, cement and concrete; providers of heavy equipment, those who operate it and other construction workers; and the positions created to maintain the completed project. Not included in the formula is the benefit to investors who buy government-backed bonds have a secure place to store their money. 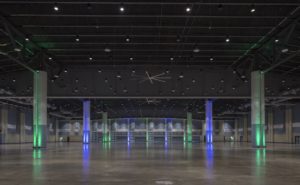 Gov. Brian Kemp and the state Legislature have provided $70 million to expand the Savannah Convention Center, furthering an economic development investment in the convention and tourism industry along Georgia’s coast. Credit: geoffsphotos via savconventioncenter.com

Consider two construction projects, one in Atlanta and one in Savannah.

Gov. Brian Kemp signed a budget for the fiscal year that started July 1 that includes a total of $82 million in debt to expand a facility in each city.

The Georgia World Congress Center is in line for $12 million in improvements. The state will sell bonds to finance the cost, and repay investors over a 20-year period. Investors are to be paid an interest rate of 6.5 percent, taxable. The state’s annual payments are forecast at almost $1.1 million a year, according to information provided Monday by the governor’s office. 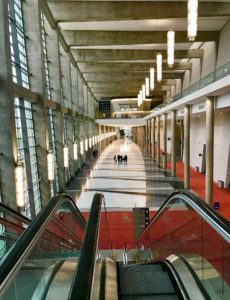 Georgia lawmakers have continued to invest in the development of the Georgia World Congress Center, providing for three major expansions since it opened in 1976. An additional $12 million was provided this year to maintain the facility’s position in convention/tourism development. Credit: Kelly Jordan

The Savannah Convention Center is in line for $70 million to double the size of the facility. Terms of the bonds are to be the same as for the GWCC – 20-year taxable bonds, paying an interest rate of 6.5 percent. The state’s annual payments are to be nearly $6.4 million. This investment follows the $23 million provided by the state in 2019, which provided for design and preconstruction services. The Legislature provided for the GWCC Authority to oversee the facility, located on Hutchinson Island, across from River Street.

The governor addressed the capital spending plan at length in remarks issued when he signed the budget. The remarks observe, in full: