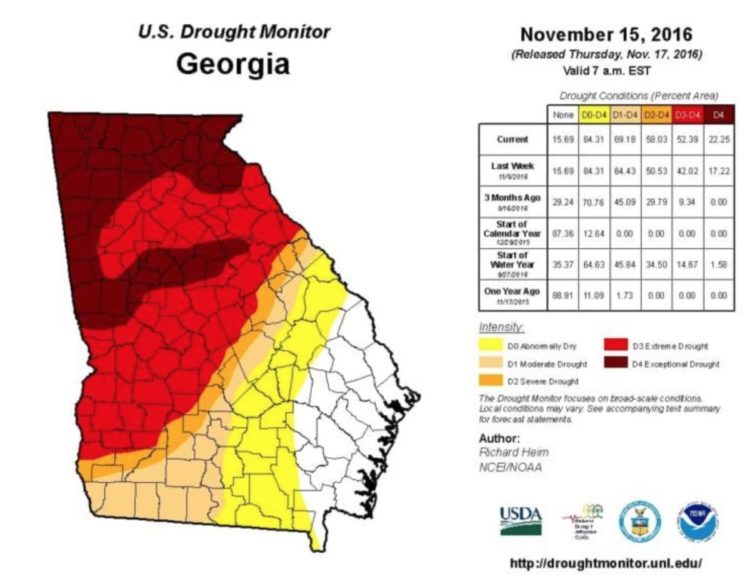 For the second consecutive week, Georgia is free of drought conditions. The weather story of this summer has been so much rain that it hindered the crop harvest in north and south Georgia, according to state and federal reports. 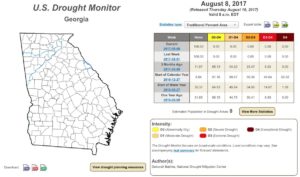 For the second consecutive week, Georgia has been free of drought. This is the first cycle since April 15, 2014 that the state has had zero drought conditions. Credit: droughtmonitor.unl.edu

In metro Atlanta, rainfall amounts exceeded the average in January, April, May, and June, according to a report by the Metropolitan North Georgia Planning District.

A total of 23.9 inches of rain fell on Atlanta from Jan. 1 through June 4, according to a report by the planning district. That’s 2.72 inches more than the 30-year average. It does not account for heavy rains in June and July that were cited by the National Centers for Environmental Information.

The scenario facing farmers this summer is fairly dramatic: 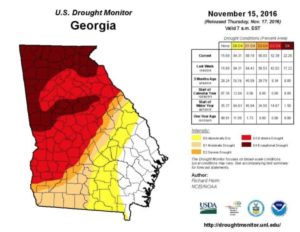 The current drought-free period is the first since April 15, 2014 that the entire state has been free of drought conditions, according to records maintained by the National Drought Mitigation Center.

Lake Lanier’s water level is about 5.5 feet below its full pool level of 1,071 feet above sea level. The moderate drought conditions that were removed in early July contributed to the lake level being lower than on the same dates in 2016 and 2015, by 1 and two feet, respectively, according to a report on uslakes.info.

Some of the wettest conditions in the southeast were reported in south Georgia in July, according to the NCEI.

The July rains followed heavy rain in June, which impacted the watermelon harvest in south Georgia, according to a report in Growing Georgia. The story quoted Tim Coolong, a vegetable horticulturist at the University of Georgia Cooperative Extension Service: