Georgia is in the thick of the abortion access battle being waged at the Supreme Court, which now includes an explicit call for justices to overturn the Roe v. Wade decision. 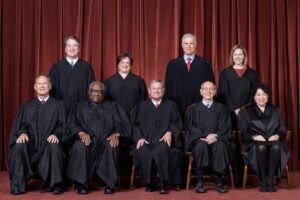 Georgia is one of 18 states that have signed a friend-of-the-court brief in the Mississippi appeal of an overturned law that intends to ban virtually all abortions after the 15th week of pregnancy.

In barring Georgia’s “heartbeat bill,” the judge cited Roe in the ruling issued in July 2020. The formal title of the law, House Bill 481, is Living Infants Fairness and Equality (LIFE) Act. Georgia Attorney General Chris Carr signed the amicus brief in the Mississippi case in July, the same month Georgia’s law was barred. In addition, Georgia has appealed the ruling against its abortion law to the 11th Circuit Court of Appeals, in Atlanta. Oral arguments are set for Sept. 24 and each party is limited to 15 minutes, according to the calendar issued July 1. 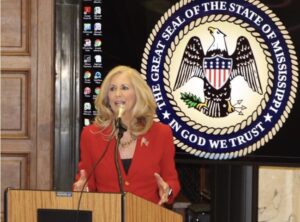 Mississippi Attorney General Lynn Fitch has called on the Supreme Court to overturn ‘Roe v. Wade’ and another case that are central to a woman’s access to a legal abortion in the U.S. Credit: ago.state.ms.us

In the Supreme Court case, Sept. 13 is the deadline for the defense to respond to Fitch’s brief, the Jackson Women’s Health Organization, according to a calendar notice.

The Supreme Court is to take up the case in the term that begins Oct. 4. A date for oral arguments hasn’t been set. The case isn’t listed on the current calendar for the court’s first two weeks in October.

Mississippi’s brief begins with an introduction that lays out the call for overturning the 1973 Roe v. Wade ruling, which determined that the Constitution protect s a woman’s right to have an abortion prior to the viability of the fetus.

Here are selected highlights from the 49-page document: 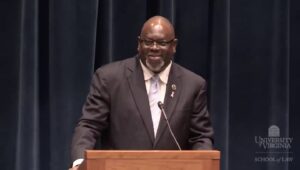 U.S. District Judge Carlton Reeves rebuked then-President Trump’s criticism of the judiciary as Reeves accepted in 2019 the top award from the University of Virginia’s School of Law. Credit: YouTube, UVA School of Law

The amicus brief does not note that Reeves has history with then President Trump. Reeves had taken on Trump’s criticism of the judiciary in the judge’s 2019 speech at the University of Virginia. Reeves said in prepared remarks, in accepting the Thomas Jefferson Foundation Medal in Law:

Previous Article
More than a statement: How institutions can commit to racial justice
Next Article
‘Rita Moreno: Just a Girl Who Decided to Go for It’ – a profile of an ‘EGOT’