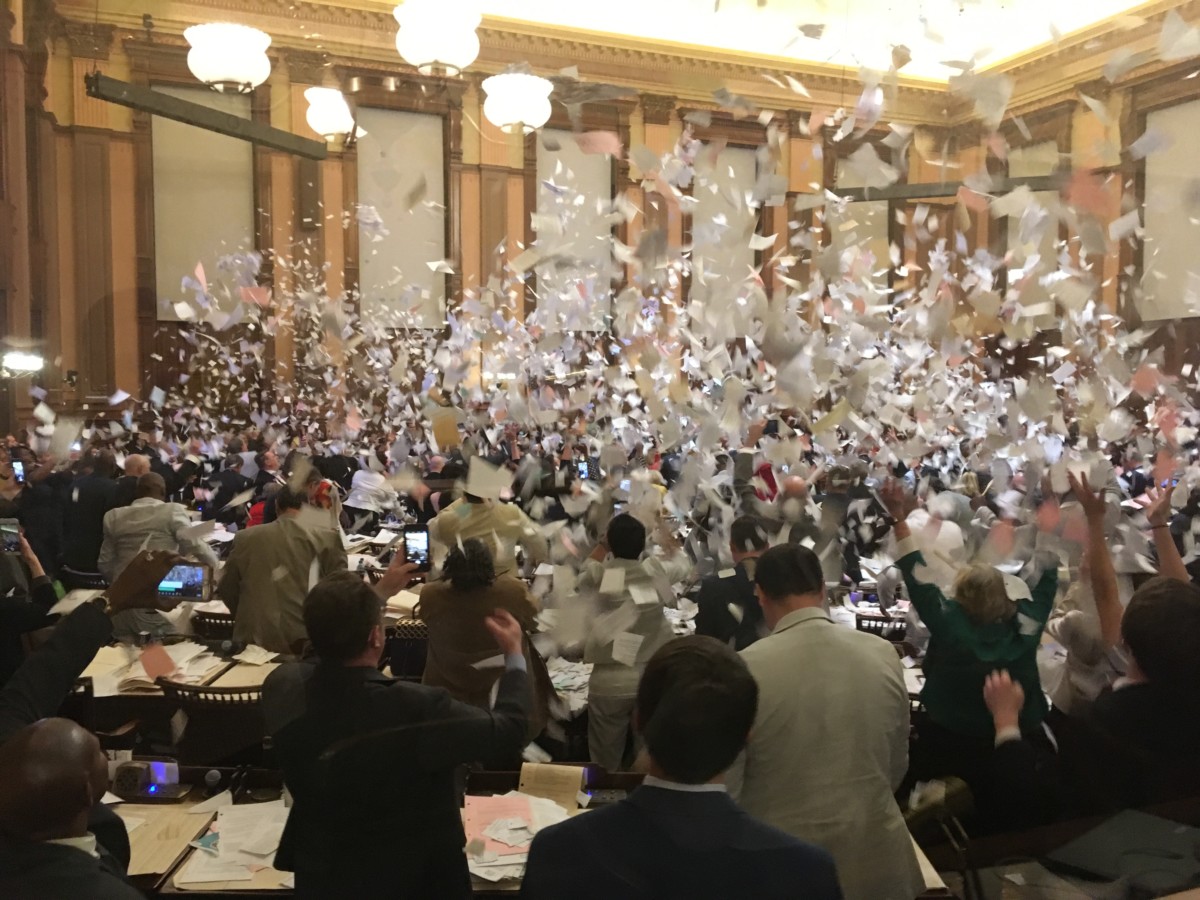 After voting on the medical cannabis cultivation bill, the House gave itself a standing ovation — then about 15 minutes later, they threw shredded paper in the air and joyously adjourned for the year. Credit: Maggie Lee

The Georgia House and Senate agreed to something very new, if limited: state-licensed cultivation and sale of cannabis for medical purposes.

This isn’t patients and caregivers growing some plants in the yard. It’s state licenses for up to six companies and two state universities to set up greenhouses and attached lab-like spaces for manufacturing a liquid made from cannabis. 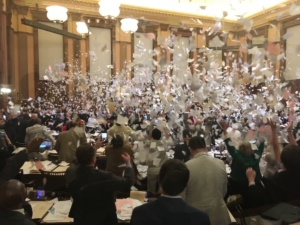 After voting on the medical cannabis cultivation bill, the House gave itself a standing ovation — then about 15 minutes later, they threw shredded paper in the air and joyously adjourned for the year. Credit: Maggie Lee

Under this law, registered patients could buy that liquid from pharmacies, if those pharmacies choose to sell it and get permission to do so from a new state commission.

That would solve a problem for people who have a state medical marijuana card, but no place to buy the liquid they use to fight the side effects of chemotherapy, the frequency of seizures or other disorders.

Since 2015, Georgians who have a doctor’s recommendation have been able to sign up for a card that allows them to posses that liquid, in the eyes of the state. The liquid is made up of less than 5% THC, the psychoactive ingredient in marijuana.

But without a place to buy, patients are instead are left with trips to other states, people in other states willing to break prohibitions on shipping over state lines, or even homebrews from street weed.

The federal government still considers cannabis an extremely dangerous drug and bans it. The 30 or so states that have marijuana bills on their books — including Georgia — are all in conflict with federal law.

Just after the Senate’s 34 to 20 approval of the bill, Republican Lt. Gov. Geoff Duncan tweeted that it’s a solution that puts patients first and called it a “huge win for Georgia families.”

In practice, the pharmacies that would participate would probably be some number of independent pharmacies, not national chains.

But if distribution through pharmacies proves insufficient, a state commission set up in the bill could also also set up rules about other dispensaries or locations that might be allowed to retail the oil, said state Sen. Matt Brass, R-Newnan, state Senate sponsor of the bill.

Brass said the bill has some measures that are tight enough to keep Georgia from moving toward recreational marijuana. He and other Republican supporters have been pretty adamant about rejecting recreational weed.

First, the bill only allows oil made from cannabis. No smoking, no edibles or other delivery methods allowed.

Second, it says the state’s medical composite board and the Georgia Department of Public Health will be in charge of recommending to the Legislature which diagnoses should be eligible for medical cannabis treatment.

The idea, said Brass, is to keep from the list of diagnoses from getting out of control. That, he said, is one thing that’s led toward recreational marijuana in other states.

As for the universities that could be involved, the two schools are the University of Georgia and Fort Valley State University. 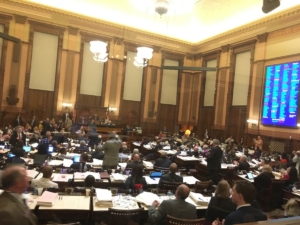 The bill amounts to allowing Georgians to “access a safe, lab-tested oil,” said state Rep. Micah Gravley, R-Douglasville, House sponsor of the bill. He said the total maximum square footage of cultivation space in the state will amount to about 9.5 acres.

The bill also includes a disparity study on participation in this industry by minority- and women-owned businesses. That’s the first step toward possibility setting up some preference for such businesses when it comes to granting licenses.

Brass, Duncan and Gravley all thanked Republican Gov. Brian Kemp for his help in brokering a compromise bill.

“This compromise legislation is carefully crafted to provide access to medical cannabis oil to those in need. This is simply the right thing to do,” said Kemp.

He called the bill the first step toward the commercialization of recreational marijuana. Cowsert said there are only about 8,400 people on the medical cannabis registry, and the bill would license more companies and square feet of grow space than are needed for such a market.

He predicted that in the coming years, there will be asks for more square feet of grow space, more diagnoses, and eventually for recreational marijuana.

“You are creating the infrastructure for that industry,” said Cowsert.

But few of his colleagues agreed with Cowsert’s objections. The state House agreed to the bill by a vote of 147 to 16.

After that, the House gave itself a standing ovation — then about 15 minutes later, they threw shredded paper in the air and joyously adjourned for the year.