The global decline in insects of all kinds is the backdrop for the end-of-summer push for bees and butterflies, including the expansion of a pollinator partnership from metro Atlanta to cover all of Georgia. 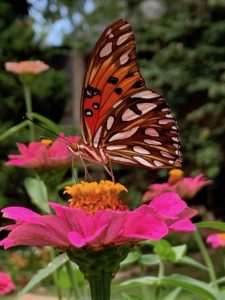 An effort to protect and nurture pollinating insects, including butterflies, has been expanded from metro Atlanta to the entire state as the Georgia Pollinator Partnership. Credit: Kelly Jordan

The Atlanta Botanical Garden, Georgia Audubon, Zoo Atlanta, Blue Heron Nature Preserve and Dunwoody Nature Center are among the organizations paying special attention to insects in general and pollinators in particular – the bees, butterflies, flies, wasps and more that pollinate plants. Bugs themselves are a source of nutrition for other critters.

“Bugs are the primary source of food for birds, so we need more bugs and pollinators to support the bird population,” Dottie Head, spokesperson for Georgia Audubon said Friday to explain the organization’s interest in insects.

Bugs help provide food for humans, too. The shortfall of apples, cherries and blueberries results from crops that were sparse because a lack of insects to pollinate plants, according to a study released July 29 by Rutgers. These crops are just the latest to be cited as suffering from a shortage of pollinators.

In 2009, the partnership in metro Atlanta was started to address the loss of natural habitat during the building boom that related to the region’s burgeoning population. Supporters included the U.S.D.A. Forest Service, Atlanta Botanical Garden, Georgia Highlands College, and the National Wildlife Federation.

The statewide expansion was announced in August, with support from the Wildline Resources Division of the Georgia Department of Natural Resources. 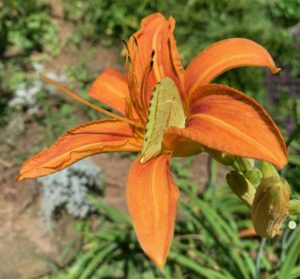 Butterflies are among the major pollinators of plants as they journey among the pistols of plants. Credit: Kelly Jordan

“Georgia DNR is eager to promote this initiative alongside the Forest Service, Atlanta Botanical Garden and other conservation organizations,” Anna Yellin, a state wildlife biologist said in a statement. “This collaboration shows how even small backyard habitats for pollinators can have a positive impact on the environment.”

The start of the effort to protect and promote pollinators begins with the step of establishing a backyard garden that serves as a safe space for pollinators.

The idea is for backyard gardeners to plant native species and grow them in a pesticide-free environment. These little gardens provide safe sources of food and shelter.

The next step is for gardeners to upload information about their safety zones to a page on the website of the Georgia Pollinator Partnership. This information will establish, over time, a comprehensive, interactive map of pollinator resources that are available across the state. The data points include location and size of the garden, types of plants, flowering seasons, and so forth. 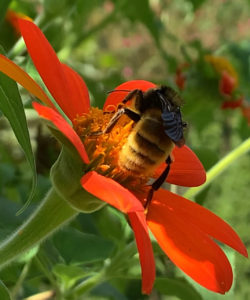 Bees promote a diverse habitat through their simple act of spreading pollen among the pistols of various flowers. Credit: Kelly Jordan

“We are very excited to see this partnership grow and produce a new map mirroring our efforts to track pollinator gardens and habitats,” Lila Uzzell, field biologist and conservation assistant with the Atlanta Botanical Garden, said in a statement. “We hope this updated application will provide more useful data and information on pollinator habitats for our partners and the general public across Georgia.”

Since 1987, insects have come to be known as The Little Things that Run the World. The name is based on the title of an address of that name delivered by Edward Wilson, now an emeritus professor at Harvard University credited with creating the awareness of the need to maintain diverse habitats.

The United Nations mentioned Wilson’s work in a research brief that included this observation in a section titled: Why is this issue important?: 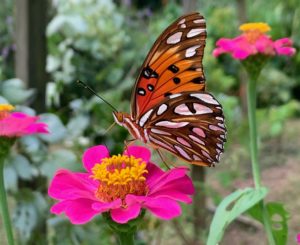