Enormous burdens on Georgia taxpayers have been imposed by damage from major storms over the past two years. Such impacts over this period are estimated to have cost Georgians some $5 billion in property and infrastructure damage, evacuation expenses, and recovery/clean-up. The majority of these expenses have been imposed by hurricanes, Matthew (2016) and Irma (2017). 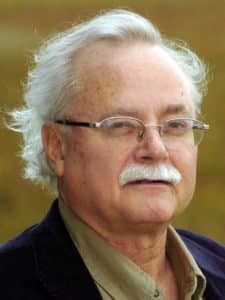 Experts agree that the damages caused by these storms were made worse by public policies that fail to provide sufficient incentives for r0educing the risk of developing areas that are in harm’s way.

Although insurance costs for residences located in floodplains are increasing significantly under the Federal Emergency Management Ageny, so far these federally subsidized rates are not deterring coastal development located in flood plains and storm-surge areas.

Furthermore, FEMA standards for flood risk – and related flood-insurance costs – are based only on historic flooding as documented. In contrast, climate modeling – based on extensive study of a complex array of factors, including accumulation of greenhouse gases, analyzed by hundreds of well-qualified climate scientists across the globe – portray a future with increasing risks that are not reflected in trends of past weather events.

In November 2017, Moody’s Investors Service released a report warning states and local governments that they must consider natural hazards to reduce related damages and cut costly risks of projects funded by investors. Moody’s is a well regarded financial advisor that sets credit ratings used when issuing bonds for public projects.

Unlike FEMA, Moody’s policy is guided by modeling of future risks that are predicted to be greater than past trends would suggest. These increasing hazards are attributed to climate-change, driven by a range of factors that are accelerating coastal hazards.

Moody’s advised public officials that unless areas at risk took steps to curtail storm damage, they would suffer a reduction in credit rating. A degraded credit rating, in turn, will raise the cost of borrowing, making essential public infrastructure –such as roads, water/sewer systems, and schools – more expensive. 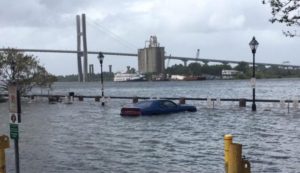 The remnants of Hurricane Irma caused heavy inundation in Savannah, where this car was nearly submerged along River Street. File/Credit: wpde.com

Policy reforms called for by Moody’s will help curb storm damage while protecting the interests of property-owners and Georgia’s economic prospects. Such measures will also improve safeguards for natural resources and the quality of life.

Consider several factors at the heart of this issue:

These issues have serious implications for development in high-risk areas as well as the coastal environment. The resilience of natural resources – including shorelines, maritime forests, and wildlife habitat – is degraded by high-risk urbanization. Improved policies could reduce damage to coastal communities by stabilizing ecosystems that would be weakened by unwise development.

Fact-based study of coastal hazards is urgently needed. Based on such study, and consistent with Moody’s report, an action plan must be prepared to reliably reduce tax-payer burdens caused by avoidable risks. 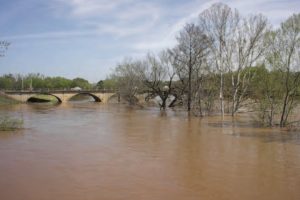 Planning for future floods along a section of the Flint River, in Albany, are guided by a scientific model created during a study of this section of the river in 2007 by the U.S. Department of the Interior and U.S. Geological Survey. Credit: pubs.usgs.gov

In preparing a coastal hazard reduction action-plan for Georgia, the following issues [among others] should be considered:

Due to the lifespan of public and private projects – such as housing, schools, and water/sewer systems – an appropriate time frame must be applied to this kind of analysis. The interests of both taxpayers and private investors will be served by providing an adequate time span of accountability for this planning.

It is likely that recommendations for an effective, comprehensive hazard plan will entail local ordinances, state legislation, and expanded responsibilities for state and local government agencies. Key to agency functions will be rigorous, reliable assessment of flooding and storm events, damage to private and public property, and the costs of these impacts to both taxpayers and property owners, including coastal businesses.

Above all, Georgia’s coastal hazard study and resolute planning must be merged with legally enforceable government procedures. Such well-managed procedures must be consistently used in making decisions about on-the-ground investments that will greatly influence future risks to life and property.

Note to readers: For more information on the Center for a Sustainable Coast’s campaign, Stand up for Science, visit the center’s Facebook page. To learn more about pending federal legislation to reduce greenhouse gases, visit this Congressional website.